Patent cliffs and pipeline risks are among the reasons these biologic drug specialists are attractively priced today.

Biotech stocks can be tremendous growth investments. The biotechnology industry as a whole has absolutely crushed the broader markets over the past 10 years in terms of total returns on capital. But individually, these stocks can present higher-than-average risk.

Armed with those insights, we asked three of our Motley Fool contributors for their suggestions of the top biotech stocks to buy now. They picked Amgen (AMGN 0.79%), Vertex Pharmaceuticals (VRTX 1.51%), and Regenxbio (RGNX -0.49%). 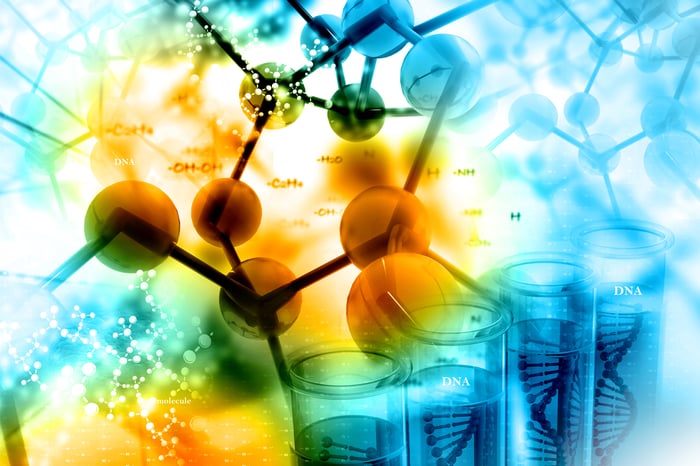 George Budwell (Amgen): Biotech blue blood Amgen is definitely worth checking out after the company scooped up Bristol-Myers Squibb and Celgene's blockbuster immunology treatment Otezla for a cool $13.4 billion earlier this week. This purchase -- though it was on the pricey side -- will immediately beef up the company's flagging top line. Amgen has been treading water from a revenue perspective of late, due to the rapidly declining sales of a suite of former stars such as Sensipar, Neulasta, Epogen and Aranesp.

Otezla, for its part, should help the biotech stem that tide in big way. Several Wall Street analysts think this deal will ultimately spark a new area of high single-digit revenue growth for the company over the better part of the next decade. This anti-inflammatory medication is expected to achieve peak sales of approximately $2.5 billion within the next five years.

As a bonus, the transaction should also provide a much-needed layer of protection against a decline in sales of Enbrel. It's Amgen's top-selling medication today, but the drug could face competition from copycat biosimilars in the not-to-distant future. Otezla's revenues will undoubtedly soften the blow if an Enbrel biosimilar hits the U.S. market sooner than expected.

Apart from its far-more-compelling growth profile in the wake of this game-changing deal, the biotech also offers a juicy 2.82% dividend yield. As such, Amgen stock should appeal to income and growth investors alike.

Keith Speights (Vertex Pharmaceuticals): Vertex dominates the cystic fibrosis (CF) market with its three approved drugs: Kalydeco, Orkambi, and Symdeko. The first two raked in more than $1 billion each last year, and Symdeko is on track do the same and join the ranks of blockbuster drugs this year.

But the good times could just be beginning to roll for Vertex. The biotech expects to win FDA approval for its triple-drug CF combination therapy by March 19. If approved, this combo will more than triple the number of patients eligible for treatment with Vertex's drugs. Market researcher EvaluatePharma ranks the company's CF combo as the most valuable pipeline candidate in development right now.

In addition, Vertex has plenty of other shots on goal. The biotech is evaluating several NaV1.8 inhibitors to pick the best candidate to advance into late-stage clinical testing for relieving pain. Vertex and partner CRISPR Therapeutics (CRSP -0.44%) recently dosed the first patient in an early-stage study evaluating gene-editing therapy CTX001 to treat sickle cell disease. In total, Vertex has seven experimental drugs across five specialty areas in development.

Vertex's growth prospects in CF alone make this biotech stock a great pick. With its pipeline and growing cash stockpile, I think those prospects could become even greater in the future.

This beaten-up biotech could be a bargain

Todd Campbell (Regenxbio): Though it's a high-risk, high-reward biotech, there's good reason to cozy up to Regenxbio ahead of some important data later this year.

The company's shares tumbled recently in the wake of word that a Novartis (NVS 0.71%) subsidiary – AveXis – may have fudged pre-clinical data on Zolgensma, a life-changing gene therapy for spinal muscular atrophy. The disclosure has weighed down Regenxbio because it licenses the adeno-associated viral vector (AAV) used by Zolgensma to deliver its genetic fix. If Zolgensma is successful, Regenxbio stands to collect significant milestone and royalty payments. If the FDA derails this drug -- or if it fails to establish a foothold in this billion-dollar indication because of the data manipulation -- then it could ding Regenxbio's revenue.

This concern may be overblown, though, in which case this could be a good time to pick up Regenxbio shares on sale. Spinal muscular atrophy is a leading cause of infant mortality, and new treatments, including Zolgensma, are necessary. Additionally, the FDA says its view of Zolgensma's efficacy and safety remains unchanged, so doctors and patients can still use it.

Of course, there's always the risk that the FDA will crack down hard on Novartis, but a slap on the wrist seems most likely. If so, then Zolgensma could still become a top seller that provides cash flow Regenxbio can use to develop its own promising gene therapies, including RGX-314, a treatment for wet age-related macular degeneration.

The wet-AMD treatment market is already worth billions of dollars per year, and it's growing because of an increasingly older, longer-lived population. Current treatments, such as the mega-blockbuster Eylea, can stall vision loss, but they need to be dosed regularly throughout the year. A one-and-done gene therapy would be a significant advance. So far, Regenxbio's early-stage clinical trial results toward that goal are promising, with some patients going up to 18 months without needing another injection.

Those results will need to be confirmed in larger, registration-enabling trials, but more data is on tap for October. If that data is good, then it could spark a return of investor optimism.