As far as investors are concerned, 2018 was a forgettable year for the solar power industry (and for energy investors in general). Although solar panels have never been cheaper, installations were down 2% year over year in the U.S.

Perhaps more alarming, a looming end to solar subsidies didn't spur much in the way of panel purchases last year. Though the tiered phase-out of tax breaks won't take full effect until 2022, subsidies begin to shrink in 2020. And, for the better part of 2018, would-be buyers didn't know if those subsidies would even last through the end of the year.

This year is shaping up differently, though. In light of data gathered over the course of the first half of this year, the Solar Energy Industries Association upped its 2019 U.S. installation growth outlook from 14% to 25%. Echoing the positive sentiment, the most recent Wood Mackenzie Power & Renewables' report suggests global installations will reach a record-breaking 114.5 million gigawatts this year, break another record next year, and hold steady through 2024.

While this rising tide should prove fruitful for most U.S. panel makers, First Solar (NASDAQ:FSLR) is arguably best positioned to ride the renewed wave thanks to its cost-effective solar panel technology and spare capacity to meet reborn demand. 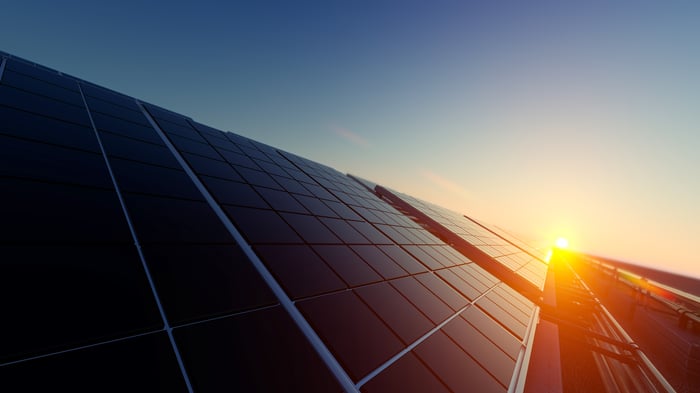 Solar stocks haven't been consistent long-term performers. Each industrywide lull has left fewer U.S.-based players standing, either through consolidation or outright bankruptcy, like Solyndra's in 2011. However, the remaining names, such as SunPower (NASDAQ:SPWR), privately held Solaria, and even electric vehicle manufacturer Tesla (NASDAQ:TSLA), are bigger and better solar panel companies a result.

First Solar is something of a standout among its peers, largely thanks to its new series 6 solar panels. Introduced in 2016 and launched, modestly, in 2018, the company's sixth-generation solar panels promised and delivered game-changing levels of efficiency. It was the first manufacturer to commercialize thin-film photovoltaic panels boasting efficiency of up to 18%, meaning that 18% of the sunlight hitting them can be successfully converted to usable energy.

It doesn't seem like much, and it's not, at least compared to the monocrystalline and polycrystalline panels that ushered in the era of solar power. But, it's more efficient than almost any other available thin-film panels, which are easier to work with and cheaper to manufacture than crystalline.

And, First Solar's recent results confirm it's capitalizing on solar's budding rebound with its new-and-improved panels. During its second quarter of the year ending in July, the organization shipped a record-breaking 1.4 gigawatts worth of solar panels.

That being said, First Solar faces a challenge most other companies would love a chance to tackle -- the solar panel industry is struggling to keep up with renewed demand.

The company continues to grow its production capacity, to be clear. July's daily output, as measured by megawatts, was 16% stronger than April's pace. Even with expanded capacity though, by the end of the second quarter 4.3 more gigawatts worth of deliveries were slated for delivery this year. A total of 12.9 gigawatts worth of orders are now in-hand.

In short, nearly two years' worth of future business has already been established. Most of those panels have yet to be constructed.

Help is on the way, however. First Solar's manufacturing plant in Lake Township, Ohio was refitted in June, with production expected beginning next year. It will become the company's fifth series 6 panel manufacturing facility, compared to none before April of last year.

Perhaps most important, this scale-up continues to lower the company's (and therefore customers') costs. While First Solar doesn't offer much in the way of specifics, CEO Mark Widmar was willing to say during April's earnings call that he expects production costs per watt for series 6 panels to fall approximately 30% by the end of the fourth quarter. The addition of new facilities will help the company reach that goal, as will ongoing refinements of the manufacturing process.

First Solar is ready to shine

Analysts certainly see the growth wave coming, even if some investors don't.

As of the most recent look for 2019, the pros are projecting revenue growth of nearly 60% for First Solar. This year's estimated 25% growth in U.S. panel installations and the rapid growth of First Solar's series 6 panel production capacity set the stage for such a turnaround, following a three year slump in the company's top line related to waning panel prices and the company's retooling.

Perhaps more important, First Solar's announced full-year earnings guidance of between $2.25 and $2.75 per share -- well up from last year's $1.36 -- feels perfectly plausible given the heavy demand for its low-cost series 6 panels.

Things could really start to cook in 2020, though. Nearly unthinkable just a year ago, next year's earnings projection of $3.64 per share.

In the meantime, note that First Solar shares are valued very reasonably at only 16.7 times next year's expected earnings at a time when solar power is back en vogue. They're also priced 20% below the analyst consensus price target near $77. That below-average valuation and below-consensus price underscore the premise that most investors have yet to spot the solar industry's rising tide.