The hospital operator's share price climbed further than the news of the day would seem to warrant.

Shares of Community Health Systems (CYH -7.54%) were trading more than 18% higher as of 3:50 p.m. EDT Wednesday. The hospital operator didn't announce any new developments, so the exact reason for the sizeable gain is not entirely clear.

However, an article published Tuesday by the Nashville Post stated that Community Health Systems and Quorum Health are "inching closer to resolving several shareholder lawsuits related to Quorum's 2016 spinoff from CHS." A resolution to these lawsuits would be good news for Community Health Systems. The company's stock was at its all-time low prior to Wednesday's bounce, even after it reported better-than-expected second-quarter results earlier this month. 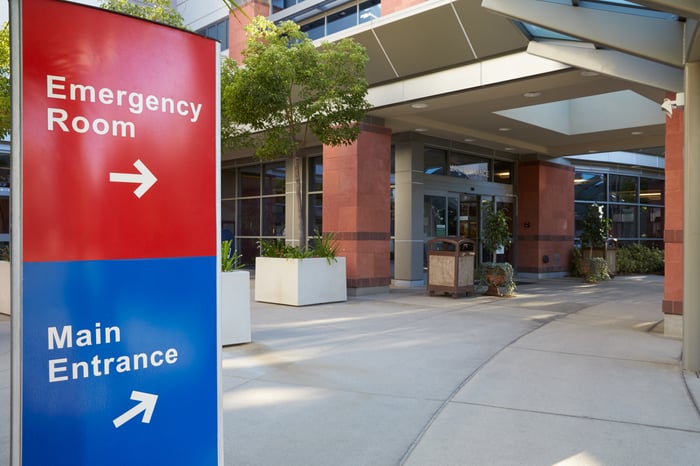 It's possible that what we're seeing is a "dead cat bounce" -- a temporary rebound of a stock that has experienced a major decline. Even if that's not what's happening, investors shouldn't get overly excited about large gains for which there are no clear catalysts.

That Nashville Post article on Tuesday could have sparked Community Health Systems' shares a bit, although the news didn't appear significant enough to spur a double-digit jump. "Inching closer" to resolving litigation isn't nearly as big of a deal as actually settling the lawsuits. However, with the stock's short interest standing north of 37%, that hint of good news could have resulted in what would otherwise be a disproportionate pop.

Regardless of what drove Wednesday's share price move, the hospital chain continues to face some major challenges -- the biggest of which is its nearly $13.4 billion in long-term debt.

The main thing investors should watch from here is how well Community Health Systems executes on its strategy to deliver value for shareholders. This strategy includes improving safety and quality, engaging more with Accountable Care Organizations (ACOs), controlling expenses, and paying down debt.

Investments in the healthcare sector are likely to be volatile over the next year, however, give the presidential election on the way in 2020. The results of that election have a real chance of leading to major changes in the U.S. healthcare system, which in turn could significantly impact Community Health Systems and other healthcare stocks.