Shares of Phibro Animal Health (NASDAQ:PAHC) fell 31% on Wednesday after the animal health and nutrition company generated weaker-than-expected quarterly results and warned that its new fiscal year would also be challenged. Phibro is being weighed down by an outbreak of African swine fever in China, which is necessitating an uptick in research and development spending and affecting demand for its products.

After markets closed Tuesday, Phibro reported fiscal fourth-quarter earnings of $0.33 per share on revenue of $204 million, falling just short of analyst expectations for $0.36 per share in earnings on $206 million in sales. The real issue was guidance, with Phibro saying it expects adjusted earnings of $1.08 to $1.15 per share in its fiscal 2020, well short of the $1.54 consensus estimate. 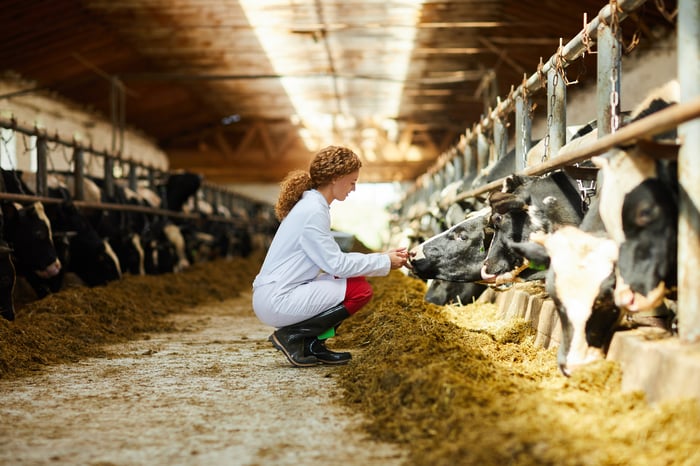 CEO Jack Bendheim blamed the swine fever outbreak for the shortfall, but said Phibro intends to keep investing in the business through the troubles even if it means near-term profit issues.

"The effects of African swine fever, as discussed last quarter, have significantly impacted our performance in the June quarter and will have an even larger impact in the new fiscal year," Bendheim said. "We have made the strategic decision to continue to accelerate our new product initiatives despite the challenges posed by [African swine fever], recognizing the short-term impact on our financial results."

Animal health is an attractive subsector of the healthcare industry due to its rapid growth and ability to hold up even in a recession, and Phibro could be a long-term winner as it works to develop a swine fever vaccine and makes other investments in its future. But the latest quarterly results showed that progress will not be cheap and will not come quickly.

With Wednesday's drop, Phibro is now down more than 30% year to date. With expectations (and the share price) now reset, investors can hope that the stock doesn't have much further to fall. But as the company laid out in its fiscal 2020 projections, the turnaround -- and potentially the stock's rebound -- are going to take time to materialize.