The company raised guidance, and also raised hopes about its vaccine candidate for African swine fever.

Shares of Phibro Animal Health (PAHC -4.93%) soared 17% after the company reported fiscal second-quarter profits that beat expectations, though they were lower than the year before. Net sales decreased 1.9% to $214 million, below analysts' consensus expectation of $219 million. Earnings per share declined 17% to $0.34, but that was far better than the market's expectations for $0.28.

Phibro, which sells health and nutrition products to livestock producers, veterinarians, and farmers, has lost sales due to the massive outbreak of African swine fever that began in China in the second half of 2018, and which has taken an enormous toll on Asia's pig herds. However, Phibro's sales in the U.S. grew last quarter, and double-digit percentage revenue growth from the company's vaccines and nutritional specialties products helped offset the decline in sales of  additives for pig feed. Overall, sales by Phibro's animal health segment, the company's largest business, grew by 2.9%. 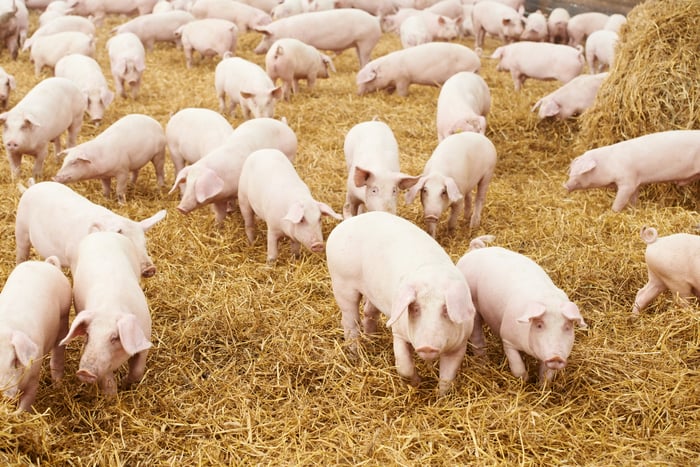 Management raised EPS guidance for the full year to a range of $1.15 to $1.22, which is well above the $1.11 analysts had been anticipating.

The improved outlook on the profit front was definitely good news, but investors who bid up the stock may also have been reacting to comments made on the earnings conference call about the vaccine candidate for African swine fever that the company has in development. It's using an approach that doesn't involve attenuated viruses, meaning the vaccine could be safer than the usual approach, and reach the market faster. CEO Jack Bendheim said that Phibro will conduct a trial of the vaccine in the spring and will announce the results later in the year.

3 Pet Med Stocks That Offer Growth and a Nice Dividend