Hasbro (HAS 0.38%) is bringing home the bacon, announcing it is acquiring Peppa Pig owner Entertainment One (ENTMF) for $4 billion in cash. It may seem as if the toy company is using Monopoly money, because that's the same price Disney (NYSE: DIS) paid for Stars Wars' Lucasfilm Studios.

While the porcine stars of the animated series are indeed a global phenomena, are they actually worth as much as arguably the most lucrative franchise in history? Lucasfilm was purchased almost seven years ago, and the inflation-adjusted domestic box office receipts of all the Star Wars movies is $7.5 billion. That figure doesn't include foreign box office receipts, DVD sales and rentals, the animated TV series, books, and perhaps the biggest revenue generator -- toys and other merchandise.

Data compiled by Statista shows nearly a quarter of all U.S. consumers own at least some Star Wars memorabilia and more than a fifth own Stars Wars action figures. Peppa Pig might be ascendant on the global popularity stage, but does it approach the depth and breadth of the Star Wars empire?

Maybe not just yet, but Hasbro also hasn't trained the Death Star on its finances by making the purchase. Peppa Pig is turning into a cash cow of its own, and the price paid could turn out to be a bargain. 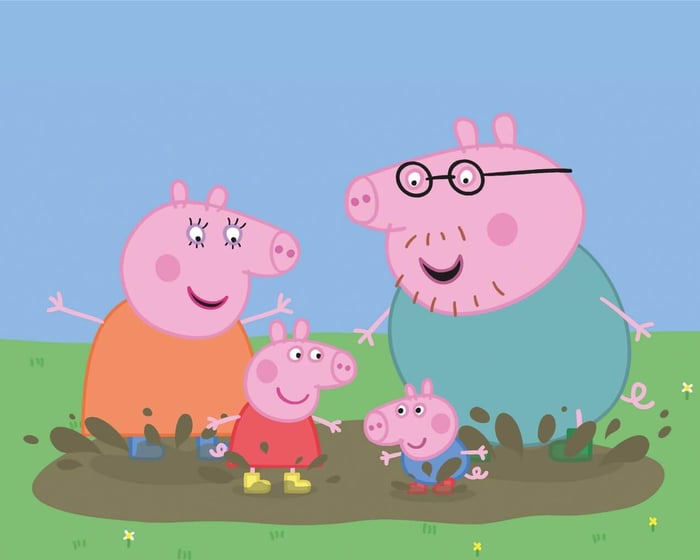 Not a pig in a poke

Peppa Pig may be Entertainment One's (eOne's) biggest property, but the company is also home to some other popular family brands, like PJ Masks, a series about three kids who become superheroes at night. Along with Peppa Pig, PJ Masks helped generate some $2.5 billion in revenue for the U.K.based eOne last year. It also has an embarrassment of other riches in its repertory.

eOne is a growing entertainment powerhouse with fingers in television, movies, music, and even technology. Among its properties is Ricky Zoom, a CGI-animated series about a red motorcycle; it was recently picked up by Nickelodeon. It's produced dozens of movies including Scary Stories to Tell in the Dark and the just-released Official Secrets with Keira Knightley, while distributing hits such as the The Hunger Games.

It has also produced dozens of TV shows including Hell on Wheels and The Rookie, while it owns the international distribution rights to monster TV hits like The Walking Dead and more. Among its musical artists are innumerable acts that it has helped produce, including Snoop Dogg, Wu Tang Clan, and Purity Ring.

There's even a technology hub called Secret Location that has developed VUSR, a visual reality platform that lets creators distribute and monetize 360-degree video to any head-mounted display.

A profitable play out of the gate

eOne is not a one-trick pony, and Hasbro's purchase could pay big dividends for years to come. It gives the toy maker access to a number of popular, growing brands that it will be able to work its own magic on in terms of merchandising and expanding into new markets, as well as a massive content library of 80,000 hours of movies and TV shows and about 40,000 music tracks, last valued at $2 billion.

It also gives Hasbro's own properties entrance into verticals it didn't necessarily have available beforehand, at least not on its own. Now Hasbro can be a completely self-contained multimedia behemoth.

The company expects to achieve "synergies" worth $130 million by 2022, but also anticipates the deal to be immediately accretive to earnings and begin growing in year two as it dramatically expands the toy maker's reach in the infant and pre-school category and expands its TV and film capabilities.

Peppa Pig might not be on the same scale as Star Wars, but it's only been around for 15 years and is still growing. The character has been viewed tens of billions of times across various platforms in China since launching there in 2015, and there are plans for a Peppa Pig theme park in Shanghai (take that, Galaxy's Edge).

Although it may seem shocking that Hasbro valued this property as much as Disney thought Star Wars was worth -- and Marvel Entertainment, too, for that matter -- the breadth of possibilities the acquisition unlocks makes it worth every penny.