Many investors have jumped ship on Cisco (CSCO -0.07%) recently, partly over concerns about macroeconomic uncertainty fueled by the trade war with China. This stock is down about 20% from its 52-week high of $58.26. This is a buying opportunity.

Cisco is one of the largest players in the game when it comes to networking and telecommunications equipment. Its name can be found branded on physical products you would see every day, like phones and modems, but it is also responsible for behind-the-scenes products you wouldn't see, like network switches and other hardware for data centers. It is this diversification that gives Cisco a strong competitive advantage for the long run, not having to rely solely on one iron in the fire like many of its competitors.

Over the last year, Cisco has continued to build out and strengthen its offerings. In July, Cisco announced its intent to purchase for $2.6 billion Acacia Communications, whose optical portfolio will aim to reinforce Cisco's current networking solutions. This is an important move in light of the imminent change to 5G.

In August, Cisco announced its intent to purchase privately held Voicea, which created an artificial intelligence voice assistant that joins meetings and takes notes. This addition will be an appropriate add-on to one of Cisco's services, Webex, an online video and conferencing platform.

These two acquisitions will take time to integrate and the company has not given figures on cost savings or potential for revenue growth, but I believe both additions will add value to the business in the long run.

In addition to expanding its business through acquisition, Cisco is also staying current with business trends. Over the last few years, SaaS, or software as a service, has been an extremely popular business model due to its primarily subscription-based revenue and high margins. Cisco CEO Chuck Robbins has been working to integrate subscription-based software into Cisco's largely hardware-based business. 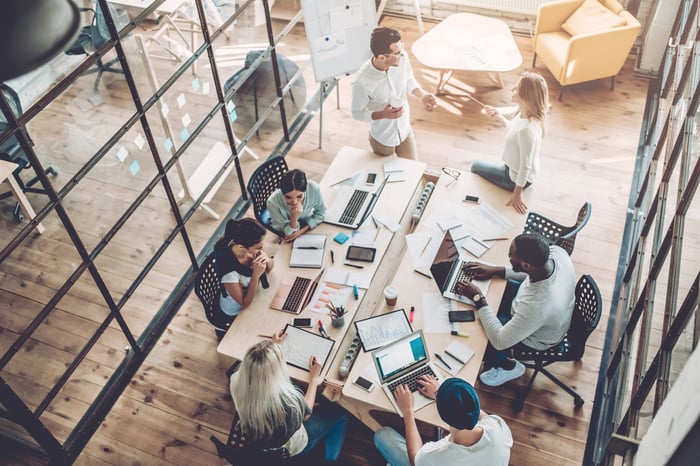 On the company's recent conference call with analysts, Robbins said that 70% of Cisco's software sales are based on a subscription and that 100% of its enterprise customers are on a subscription basis. While Cisco's financial reports don't break out product revenue into strictly software, these are encouraging numbers to hear.

The move to subscriptions continues to drive Cisco's margins up -- total gross margin in the most recent quarter was 63.9% as opposed to 61.7% at this time last year. Software is cheaper from a labor and inventory standpoint than hardware and generally yields more profit because of that. Software-based business models are on the rise. Cisco recognizes that, and is implementing it quickly to improve its margins which, I anticipate, will only continue to improve.

Cisco is set to succeed

I believe Cisco has a strong balance sheet and is dedicated to fiscal responsibility. On the conference call, Robbins renewed the company's commitment to return at least 50% of the company's free cash flow to shareholders via a dividend, which Cisco has paid and increased for the last eight years, and stock buybacks. It spent $4.5 billion repurchasing 82 million shares in the just-ended fiscal year.

This reduced the outstanding shares to 4.28 billion and the dividend yield at the current stock price is around 3%. Cisco has $11.7 billion in cash and equivalents and has a current ratio of 1.5, giving it plenty of wiggle room to handle its current obligations, pay down debt, and return value to shareholders.

The stock's pullback presents a great time to start a long position in a strong blue chip that is growing and has strong management dedicated to shareholders. You can take comfort in knowing that China ultimately accounts for less than 3% of its business and upper management at Cisco does not cite the trade war as a concern. Don't let overblown fears of the China situation scare you off.