New York-style burger and hot dog chain Shake Shack (NYSE:SHAK) was a hit when it made its public market debut back in 2015. The stock nearly doubled within a few months time, but investors quickly realized it would take much longer than had been initially thought for the fast-casual concept to reach a nationwide scale. Shares subsequently went in reverse, and the Shack didn't return to its 2015 valuation until last year.

But it's deja vu in 2019. On the back of strong financial results and solid execution in opening new restaurants, Shake Shack shares have more than doubled year-to-date. The stock looks wildly overpriced to me at this point -- a little less so than it was a few years back, but overpriced nonetheless. 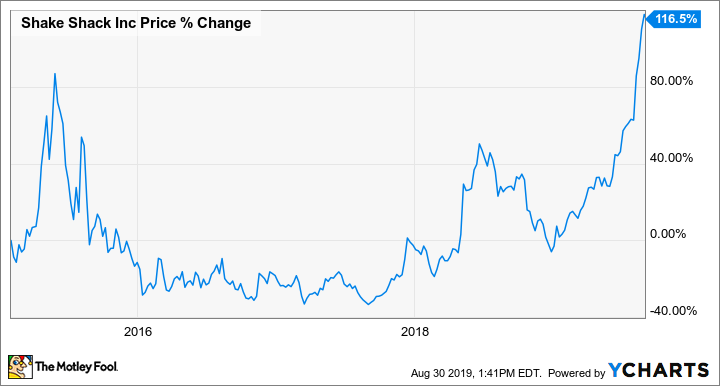 Before I go any further, I need to acknowledge a mistake. Last year, I wrote about a growing bubble in new restaurant openings, and pointed to new better-burger joints as big culprits in inflating it. While the flood of new stores in the dining-out space is cannibalizing foot traffic from existing restaurants, my forecast that certain hamburger stocks would face some challenges -- specifically Shake Shack and West Coast rival The Habit (NASDAQ:HABT) -- was at the very least premature. Simply put, America's love for ground beef patties on buns looks unstoppable, and Shake Shack has been a big beneficiary of that (although The Habit's stock has fallen by nearly half since then in spite of its ongoing successful expansion). 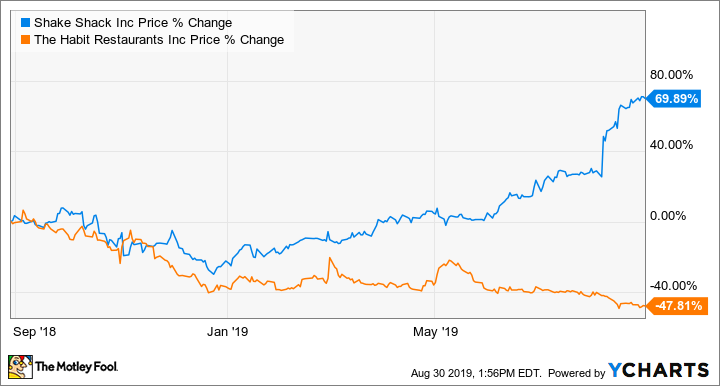 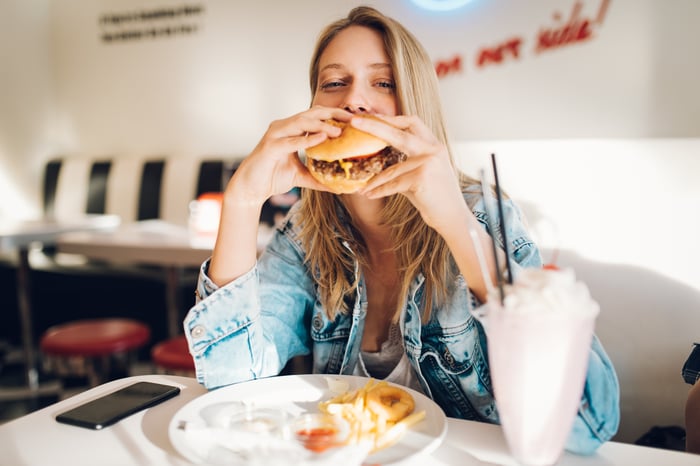 During the second quarter, Shake Shack revenues grew 31% year over year. The chain has opened 21 new stores since the start of the year, and same-Shack sales (foot traffic and average guest ticket size) grew 3.6% at existing stores, the same rate as they did in Q1. The company is off to a hot start to 2019, and management upped its guidance for full-year revenue to a range of $585 to $590 million (compared to $576 to $582 million before). That's the reason for the more than doubling in value in the last eight months.

Keeping up with Shack

Here's the downside: Though Shake Shack is incredibly efficient -- churning out an average of $4.3 million in annual sales per location, -- those numbers are falling. The chain is expanding into markets that are less densely populated, which means fewer sales per location, which in turn will equate to lower average profit margins per unit. By year's end, management said it expects average sales per location to be in the $4 million to $4.1 million range. So the stores it's opening in new markets are still profitable, just not quite as lucrative as the ones in the company's home territory in the Northeast.

Slightly offsetting that are profits from licensing Shacks to franchisees -- specifically those that are overseas. Franchising is a small but highly profitable endeavor for the company, as it offloads the expense of running the store onto a partner, allowing the parent to simply collect some of the profits. Thanks to new deals, customers in mainland China, the Philippines, Singapore, and Mexico all got their first tastes of Shake Shack this year. Licensing revenue is up 38% year to date to $8.88 million.

All told, Shake Shack's expansion efforts are starting to yield results, and investor optimism is once again high. However, as good a year as it has been, that's what has me particularly concerned. Because it is opening up a few dozen stores every year, the company's expenses are high and its net profits thin. Its price-to-sales ratio stands at 5.7, the highest its been since the ludicrous days of 2015 when the company was a fresh IPO. For comparison, McDonald's (NYSE:MCD) has a price to sales ratio of 8.1, but some 90% of McDonald's stores are franchised, which means the fast-food giant's gross profit margin is twice that of Shake Shack. 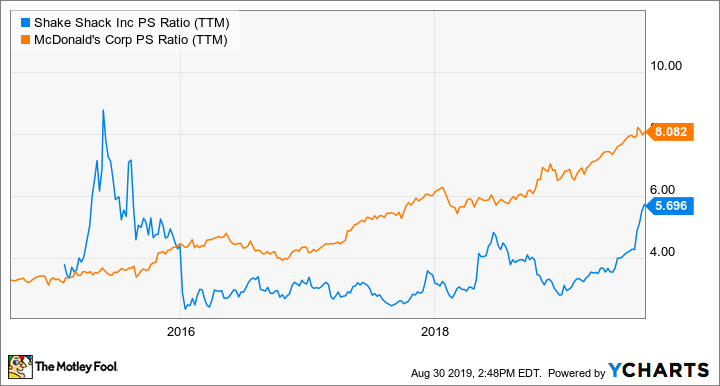 While I've certainly missed out on an exciting ride this year with Shake Shack stock, that upward run looks like it has stretched the valuation pretty thin. All indications are that the burger upstart has a bright future ahead, but this is not the time to buy in -- at least, not for me.