Christmas might not be so merry for Amazon.com (NASDAQ:AMZN) this year. Although it's expecting another record holiday season, with some analysts predicting it will account for 45% of all e-commerce sales, there is pressure building up behind its delivery operations that could force it to the breaking point.

Amazon is pushing next-day delivery through its Prime membership program just as it has lost FedEx (NYSE:FDX) as an air and ground delivery service, while the air cargo fleet operators that it uses for Amazon Air are bogged down in union contract negotiations that show few signs of being resolved.

There is little margin for error this Christmas, but Amazon's delivery capabilities may be stretched to the maximum, and any deviation from precision could cause a major upheaval. 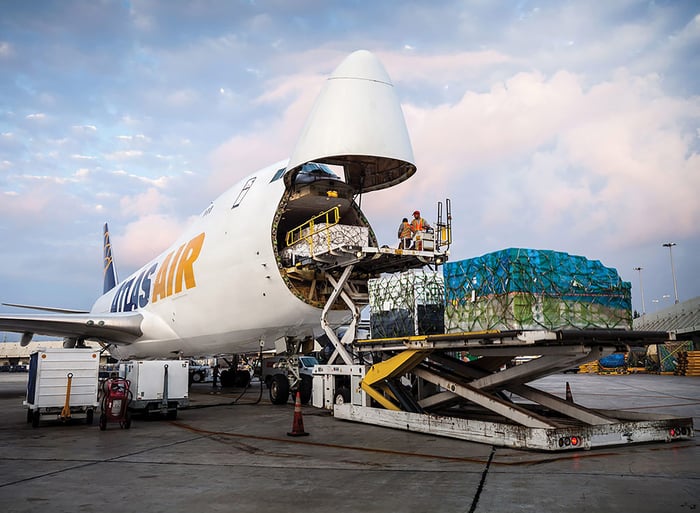 While Air Transport Services Group hasn't had disruptions caused by its pilots union, and is expected to begin mediation proceedings this month with its ABX Air pilots, Atlas Air's labor relations have been more contentious.

The problem stretches back to its 2016 acquisition of Southern Air and the union wanting to negotiate a contract first before merging pilot seniority lists between the two airlines.

Atlas argues that the union is undermining its ability to negotiate a contract by being intractable, and says that weaker second-quarter earnings "were impacted by labor-related service disruptions." It went to court to get an injunction to stop pilot actions and reported this summer that an appeals court had affirmed the ruling ordering union members to stop "improper activities such as excessive sick calls on short notice or refusing to work overtime."

During its August earnings conference call, Atlas said the disruptions were ongoing despite the injunction and were costing it money as flights were delayed and it had to move crews around to fill slots.

Amazon is ready to look elsewhere

Amazon has taken a dim view of the recurring problems, telling the news site Business Insider earlier this year:

We are disappointed with the current state of relations between Atlas and their pilot union. Neither side seems willing to work toward a reasonable compromise. This is contrary to the interests of Atlas, the pilots, and the customers they both serve.

Amazon suggested the union is needlessly creating discord, noting, "We repeatedly hear claims made by the union regarding Atlas's service for Amazon that when investigated are factually inaccurate." But it's not willing to let the airline drag out the situation, either. It also told Business Insider: "The continued inability of Atlas and their pilot union to resolve these negotiations could result in a change to the allocation of our current and future aircraft. We have an obligation to deliver to our customers, and so do they."

This suggests Amazon may rethink how much business it gives Atlas, and possibly its investment in the company. Amazon leases 19 of its 111 aircraft, and agreed to lease an additional 15 planes by 2021. It can also acquire up to a 40% stake in the airline. Amazon leases another 20 aircraft from Air Transport Services, and will take five more this year and an additional five next year. It has a 33% stake in that carrier.

Amazon Air now serves roughly 24 cities since launching in 2016 and will continue growing as it adds more aircraft to its fleet. Earlier this year, it began construction of an air hub at Cincinnati/Northern Kentucky International Airport that will be able to handle as many as 100 planes when completed in 2021.

A scheduled protest at the airport late last month by the pilots union was not so much a message to Atlas Air or Air Transport Services Group, but rather for Amazon, which has had its own labor issues. Workers at its Minnesota distribution center staged a one-day walkout during the Prime Day event in July. And on Black Friday last year, numerous workers across Europe staged a walkout.

An arbitrator just ruled in favor of Atlas Air. He said the union had to provide the airline with an integrated seniority list for Atlas and Southern pilots, at which point they would begin negotiations for a joint collective bargaining agreement. If there are any issues remaining after nine months, they will be decided by binding arbitration, according to Atlas.

This should jump-start negotiations, but doesn't mean they will be complete tomorrow. If negotiations drag on, that won't bode well for Amazon. The union contends there is a pilot shortage and that more will leave because other carriers like FedEx and DHL pay substantially more. Atlas disagrees that it is short-staffed, but as the holiday shopping season begins in earnest, the slightest deviation from the norm could cause serious delays and throw a big wrench into Amazon's shipping machinery.

Editor's note: This story has been corrected. Pilots have not been working without a contract; their contracts become amendable and while they negotiate new terms, the existing terms stay in place. Atlas Air did not go to court this summer for a new injunction. The latest arbitrator ruling does not send the parties immediately to arbitration.