A metric tied to U.S. manufacturing activity showed contraction on Tuesday, the gloomiest reading in 3 years. This news sent all the major stock indices lower.

Seltzer could be a problem for Boston Beer

Hard seltzer is having a moment this summer. Sales have exploded, up something like 200% over the past year, according to Nielson. This trend is putting pressure on sales of higher-calorie alcoholic beverages like beer.

Boston Beer Company, the brewer behind Samuel Adams beer, has managed to ride the hard seltzer wave with its Truly brand, which launched back in 2016. Along with White Claw, Truly has emerged as one of the leading hard seltzer brands. 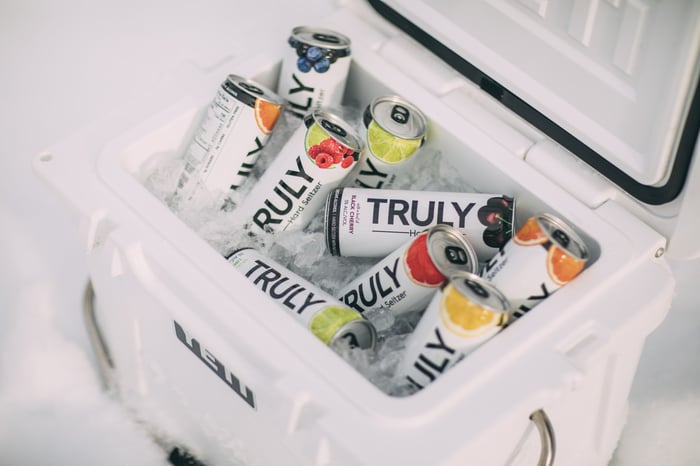 Ostensibly, this is good news for Boston Beer. Analysts from Macquarie even upgraded the stock last month on the premise that hard seltzer sales would drive earnings higher over the next few years. But a dissenting view emerged on Tuesday, triggering a steep sell-off. Shares of Boston Beer were down about 6.1% at 1 p.m. EDT.

Analysts at Jefferies downgraded shares of Boston Beer to "underperform" on Tuesday, lowering their price target from $360 to $332. Increasing competition in the hard seltzer market was the driving force behind to downgrade.

The big question is: How loyal will hard seltzer consumers be to their currently preferred brand? In the same way that sales of La Croix have come under pressure thanks to competition, Truly could be displaced by any number of very similar competing products. Boston Beer benefits from customer loyalty in its core beer business, but the hard seltzer business could be a different story.

Cleveland-Cliffs sells off after dividend announcement

A special dividend is usually viewed as good news by the market, but that wasn't the case for iron ore miner Cleveland-Cliffs on Tuesday. The stock was down 13.3% at 1 p.m. EDT after the market reacted poorly to the company's latest dividend announcement.

That sounds an awful lot like "this time is different." The market doesn't seem to be buying the story – the stock is now down nearly 40% since peaking in late July. Fears of a possible recession in the not-too-distant future may be playing a role. While the special dividend is a nice bonus for investors, it hasn't changed the market's mind.