The existence of Comcast's (NASDAQ:CMCSA) Universal Studios in Florida has pushed Walt Disney (NYSE:DIS) to grow. You could argue that the creation of Islands of Adventure (IoA) -- Universal's second park or "gate" -- in 1999 pushed Disney to launch what is now called Disney's Hollywood Studios, and it's very clear that the Harry Potter-themed attractions at Universal led Disney to invest more heavily in its parks.

The existence of IoA made Universal arguably a vacation destination on its own rather than a side trip during a Disney vacation. Wizarding World of Harry Potter set a new standard for theme park immersion and clearly made Universal a potential vacation favorite.

The vacation destination idea is something Universal has encouraged by building hotels, adding an impressive water park (Volcano Bay), and pricing tickets the same way Disney does so that visiting becomes a better value the longer you stay. Now the company is planning a third nonwater theme park, Epic Universe. 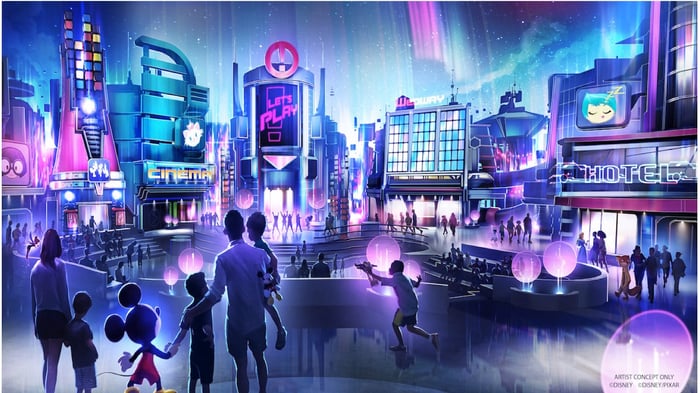 Will Disney take the bait?

It's fair to say that a fifth Disney gate isn't coming soon (the company does not consider its two water parks stand-alone gates). The company has not quite completed its Star Wars lands in California and at Orlando's Hollywood Studios. Both are open, but a key ride attraction, Star Wars: Rise of the Resistance, has not premiered yet. It also has a Mickey Mouse-themed ride at Hollywood Studios, a Tron roller coaster at the Magic Kingdom, and a massive overhaul at EPCOT underway.

That's a heavy slate of new rides and a major redo at EPCOT. The planned additions could serve as an antidote to Epic Universe, though neither company has laid out a timeline for completion.

New rides, however, bring visitors back. In the case of major changes like Star Wars: Galaxy's Edge or the EPCOT overhaul, they may even cause people to schedule vacations.

None of those -- even Star Wars -- competes with a new Epic Universe theme park that will likely have Nintendo content and possibly more attractions from the Harry Potter universe. More importantly, the third traditional theme park will make it impossible to fully experience Universal in a single day.

It's currently possible to experience IoA and Universal Studios in one very long day. You won't ride every ride or see every show, but you can hit all the highlights, especially if you spring for Express Pass, an add-on that lets you use shorter lines to access most rides.

A third traditional park turns Universal into a rushed two-day experience or a more sedate three-day one. Add in a water park day and a day to go back and reride your favorite rides, and you have a viable five-day vacation (maybe six or seven if you take it easy or spend time at the hotel pool).

No new Disney park right away

There's a lot to do at the four Florida Walt Disney theme parks without the addition of another gate. Still, this is essentially an arms race, and once the Mouse House exhausts the usable space in its existing parks, it might add another one.

That won't be anytime soon. For instance, EPCOT still has unused and lightly used space for expansion. Disney also has a Star Wars-themed hotel in the works that will operate as a cruise-like immersive experience. And an NBA-themed attraction (sort of an indoor mini theme park) just opened at Disney Springs, the shopping area adjacent to the Florida parks.

A fifth gate is likely but not imminent. For the next few years, expect Disney to focus on the new rides it has already announced and on relaunching EPCOT after it gets overhauled with new rides, attractions, and restaurants.