Domino's (NYSE:DPZ) has been a leader when it comes to pioneering ways to deliver pizzas. The company credits many of those efforts to teams working at its World Resource Center in Ann Arbor, Michigan.

The company has now created a new space to support what it calls "cross-functional teams," the Domino's Innovation Garage. The recently opened space at Domino's Farms in Ann Arbor will allow groups of employees to "collaborate on, create and test new ideas to take the brand to the next level," according to a press release.

It's an idea that's similar to what another innovative company, Starbucks, has done with its Tryer Center. Both are spaces that let employees try, test, and create ideas that can eventually be used at actual stores. 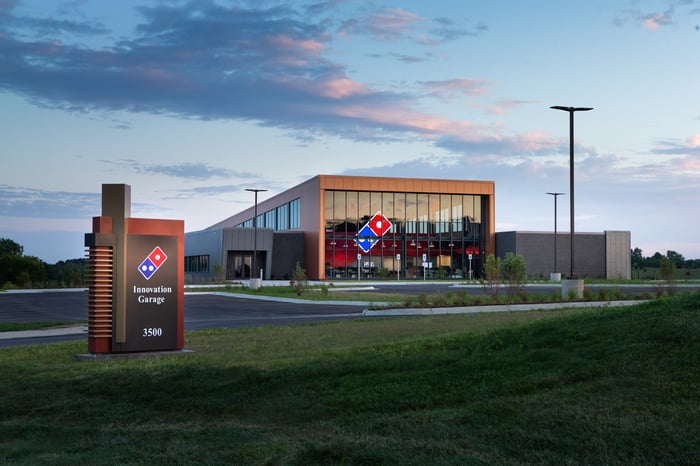 While Domino's is a pizza company, its differentiating factor has never been pizza. Instead, the chain has mastered execution, and made it very easy to get its products. Domino's is as much a convenience company as it is a restaurant, and keeping an edge in the area means constantly innovating.

The Innovation Garage should help make that happen. The space is a 33,000-square-foot two-story building with space for 150 people to work. It has what the company called a "pizza theater," a test kitchen of sorts, as well as areas devoted to testing new delivery technology, including the chain's prototype self-driving vehicles and delivery robots.

"Domino's Innovation Garage is focused on accelerating Domino's spirit of creativity and collaboration," said Domino's Chief Technology Officer Kelly Garcia. "As a pizza company with a focus on technology, we want our team members to have a workspace that encourages experimentation and fosters an environment to take risks, test innovations and fail-fast so they can bring their best cutting-edge ideas to life for the brand's customers and stores."

A smart play for Domino's

The challenge with being a company that gains its edge from technology is that eventually rivals catch up. Domino's app has been at the forefront of the restaurant industry, but once technology gets released publicly, rivals can copy it.

Delivery technology may give the pizza chain its next edge. If it can automate some deliveries, then it will be well ahead of its rivals in the pizza space, and will likely have a lead over most restaurants.

Nobody should invest in Domino's stock because the company has the best pizza -- in most parts of the country, local places, regional chains, and arguably some other national chains offer a better food product.

You invest in Domino's because the company has the easiest-to-get pizza that's incredibly accessible to people. You can't order from your local pizza shop by pressing a button or two in an app. Domino's lets its customers do that, and the Innovation Garage should allow the company to continue building on what has made it a strong brand.

If pizza drones or robot delivery is coming, then Domino's needs to get there first. This new innovation center should give the company the right environment to create and test new solutions, working out the kinks before they get released to the public.