Coca-Cola's (NYSE:KO) stock packs a 2.9% dividend yield, and the company has achieved Dividend King status by raising its payout for more than 50 years straight. With some of the most valuable beverage brands in the world and a strong dividend profile, it's no wonder the beverage leader has been a go-to portfolio component for many income-focused investors.

Coca-Cola stock has delivered fantastic returns over the last half-century, but the company's business has been losing some of its fizz as consumers move away from sugary sodas and seek healthier options. That's not to say that Coke won't find success updating its product portfolio and continue to see strong performance in emerging markets -- or that the stock won't continue to generate solid dividend payments for years to come.

However, there are probably better long-term plays. If you're looking for top dividend stocks, you might consider PepsiCo (NASDAQ:PEP) and Johnson & Johnson (NYSE:JNJ) instead. 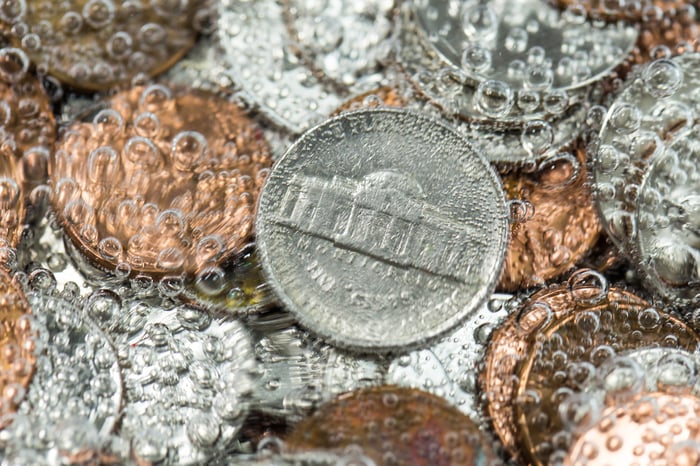 Coke versus Pepsi isn't just an age-old question in the soft-drink industry and the subject of blind-taste-test marketing campaigns. It's a match-up that's long been a topic of debate among income investors. It's also one that's unlikely to be definitively resolved as long as the two companies are in operation. While I personally prefer the taste of Coca-Cola's namesake soda to that of its rival, I break ranks in maintaining that PepsiCo is a better long-term income investment.

While Coca-Cola has typically held the top spot in the soft-drink market, PepsiCo has put more emphasis on diversification and built up business through its Frito-Lay and Quaker divisions. That move has worked to its benefit, particularly as recent years have seen consumers shift away from sugary drinks in the important North American market.

PepsiCo's 2.8% dividend yield comes in just a hair below Coca-Cola's, and I like the former company's lower payout ratios and long-term growth prospects better. Covering Coca-Cola's forward dividend will require roughly 75% of the company's trailing earnings and 88% of trailing free cash flow (FCF), while PepsiCo's earnings and FCF payout ratios over the trailing-12-month period come in at 68% and 87%, respectively. Pepsi has raised its payout by roughly 46% over the last five years, while Coke has raised its payout by 31%.

Both companies are in heavy spending periods, and PepsiCo's guidance actually calls for it to pay out around 100% of its free cash flow in dividends in the current fiscal year. However, if Coca-Cola does not significantly exceed its target for FCF of at least $6 billion in the current fiscal year, its current outstanding share count would see the company distributing roughly $6.84 billion in dividend payments -- working out to a payout ratio of 114%. Both payout ratios look quite high, but Coke's is significantly worse.

The red-can company has delivered annual payout growth for a whopping 56 years straight, while the blue-can company has a very impressive 46-year streak of annual payout growth. Both beverage giants have been reliably raising their payouts since before I was born, and both companies will likely continue to hike their dividends each year. However, PepsiCo's lower payout ratios put it in position to deliver bigger dividend hikes.

PepsiCo has also been having more success growing FCF, and it's translated to dividend growth that tops that of its rival. 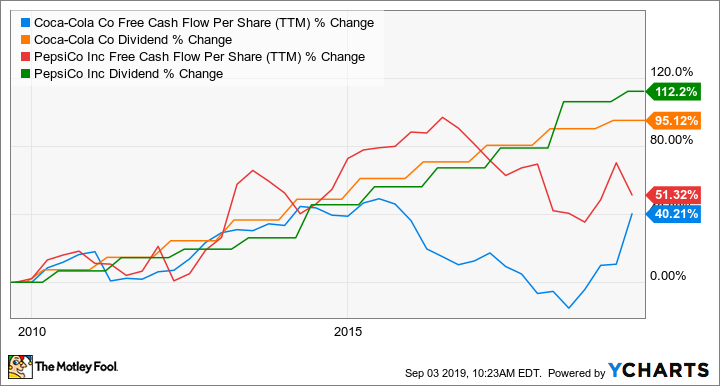 Pepsi's forward price-to-earnings ratio of 25 also comes in below Coke's forward P/E of 26 as well. Like the difference in taste between the two namesake sodas, it's not unreasonable to point out there's not a big gulf between the two when it comes to their current P/E values. However, PepsiCo's more diversified product lineup appears better positioned for navigating shifts in consumer tastes, so the slightly lower P/E still looks significant.

Johnson & Johnson has been in operation for more than 130 years, and it has the makings of a great income stock and a steady performer that's built to weather market volatility. The healthcare stalwart is poised to see long-term benefits from trends including aging populations in its core Western markets and overall global population growth, and shares look attractively valued trading at just 15 times this year's expected earnings.

While consumers may continue to move away from sugary beverages, it's a virtual certainty that more people will need healthcare products and services. Whether J&J will maintain its leadership status in its core business areas and effectively position itself to serve an expanding healthcare market is another question, but the company actually looks pretty well set up for the future despite some recent setbacks and looming challenges.

J&J stock is facing pressure stemming from high-profile legal cases and decisions. The company has been hit with a string of lawsuits and judgments related to the alleged tainting of its talcum-based powder with asbestos and litigant claims that this caused the development of ovarian cancer and mesothelioma. The healthcare company was also recently ordered to pay $572 million in a suit alleging that it had misrepresented the dangers associated with opioid-based drugs and exaggerated their positive effects. In addition to the recent legal troubles, the company's pharmaceuticals segment (which accounts for roughly half of sales) has to contend with patents for its drugs entering into the public domain and paving the way for generic alternatives.

The recent sell-offs have pushed the yield on the healthcare giant's stock up to roughly 3% -- just a bit above what you're getting with Coke. Like Coca-Cola, Johnson & Johnson is a Dividend King. The company has raised its payout for 57 years running, and the cost of covering its forward dividend comes in at just 62% of trailing earnings and 56% of trailing free cash flow. The healthcare giant hasn't been a slouch when it comes to payout growth, either, with its roughly 36% dividend growth over the last five years, edging out Coke's dividend growth. Its dividend growth of 94% over the last decade comes in just below the beverage giant's payout growth of 95% over the stretch.

J&J is facing some significant challenges, but it currently looks like a better defensive stock and long-term income play than Coca-Cola. Consumer products is the smallest of J&J's three segments, but the company name remains well-trusted, and it has a strong lineup of brand names including Band-Aid, Tylenol, Listerine, and Neutrogena. The company has also been making internal steps and big investments to modernize its healthcare devices business, making strides in surgical robotics and big acquisitions in the augmented reality field. And while drug patents aging into the public domain will continue to be an issue, Johnson & Johnson still has a forefront position in pharmaceuticals.