Shares of most energy companies tumbled in August, including those of leading U.S. oil and gas producers ConocoPhillips (NYSE:COP), Continental Resources (NYSE:CLR), and EOG Resources (NYSE:EOG). All three lost more than 10% of their value last month, according to data provided by S&P Global Market Intelligence. Fueling their sell-off was a combination of lower crude oil prices and lackluster second-quarter earnings reports.

Oil prices slumped about 6% last month, which pushed the U.S. oil benchmark down to around $55 a barrel. Several issues weighed on the oil market, including weak global economic data and rising oil inventory levels. That sparked concerns that oil-demand growth would slow, which could cause another oversupply. 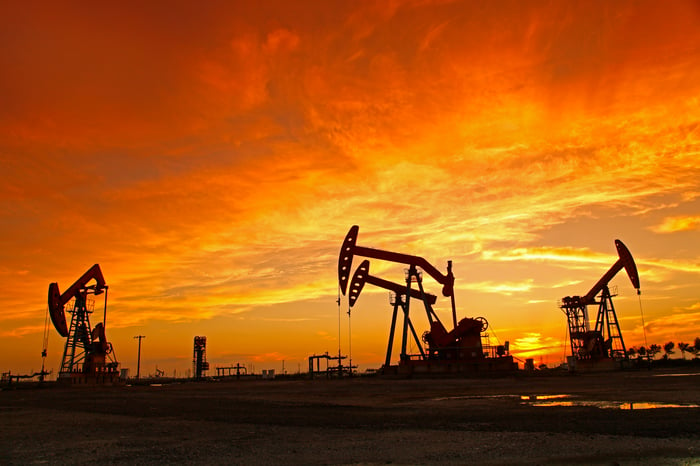 The decline in oil prices hit Continental Resources' stock the hardest, as it cratered 21% on the month. That's because the company needs $60 oil to fuel its five-year plan, which would see it produce $5 billion in free cash flow by 2023. The company intends on using that money to pay off more debt and repurchase additional shares.

Meanwhile, another factor weighing on Continental Resources' stock last month was its second-quarter report as its earnings missed analysts' expectations by $0.02 per share. The company also cut its drilling program in Oklahoma's STACK shale play from 19 rigs to 12. While that's primarily due to efficiency gains, investors saw the activity decline as a sign of weakness.

EOG Resources' shares, meanwhile, lost about 13.5% of their value last month. While oil prices were the main issue weighing on EOG's stock, the company didn't help matters by reporting slightly lower-than-expected second-quarter earnings. Cash flow, however, came in at a healthy $2.1 billion, which was enough to cover the company's capital expenses and dividend with about $350 million left over.

EOG Resources is one of the few U.S. oil producers that can generate free cash at $50 oil. With crude sliding back down toward that level, however, investors worry that its free cash flow machine could run out of fuel in the coming quarters.

Finally, ConocoPhillips shed about 12% of its value last month, costing its investors $7.6 billion of market value. Lower oil prices were the primary issue weighing on shares of ConocoPhillips in August since it reported its second-quarter earnings in late July. However, like EOG and Continental, it posted lower-than-expected earnings in the quarter due to the volatility in the oil market this year.

ConocoPhillips has been trying to take advantage of this situation by ramping up its share-buyback program, which it did during the second quarter by repurchasing $1.2 billion in stock. That was $500 million more than planned as it accelerated its repurchases to take advantage of its slumping share price. Given that its stock has continued to decline, ConocoPhillips could use some of its $6.9 billion cash position to retire even more shares this year.

August was another rough month for the oil market. Crude prices gave back more of this year's gains because investors are worried about a potential slowdown in demand growth. Those lower prices will impact oil producer cash flows, which is weighing on their valuations.

However, on a more positive note, producers are continuing to drive down costs so that they can produce more cash at lower prices. That's giving them the funds to buy back their stock, enabling them to take advantage of periods of weakness. This strategy should help them create more value for investors in the long run.