At the time, Yahoo's $1.1 billion acquisition of blogging and social networking platform Tumblr seemed like a brilliant idea. Facebook (NASDAQ:FB), Instagram and Twitter (NYSE:TWTR) were all the rage in 2013, and Yahoo had nothing like it. Tumblr was a chance to gain entry into the fast growing social media and personal publishing market.

Except, it wasn't. Verizon (NYSE:VZ), which acquired Yahoo in 2017, announced in early August it would be shedding Tumblr altogether. The parent company of blogging architecture outfit Wordpress is reportedly purchasing the platform for a scant $3 million. Neither Yahoo nor Verizon itself could ever do anything fiscally meaningful with Tumblr.

The news wasn't surprising. In the middle of 2016, Yahoo booked $482 million worth of writedowns on its acquisition of Tumblr, adding to a $230 million impairment charge taken just three months earlier. Those writedowns, coupled with comments from some Yahoo executives and then Verizon executives after it bought Tumblr's parent, made it clear that the blogging brand wasn't paying off the way it was supposed to. 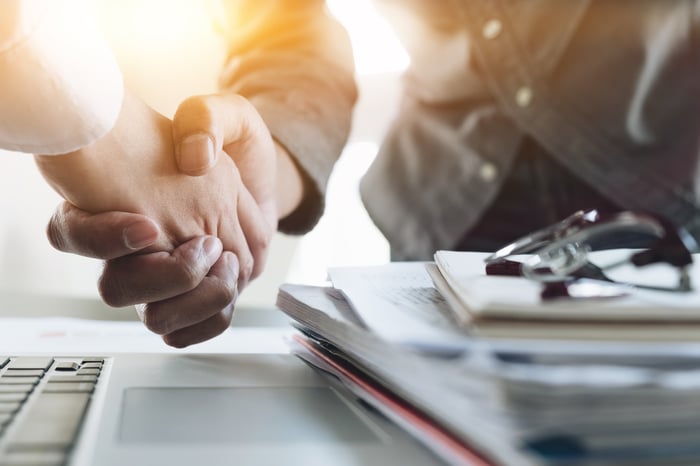 The debacle is in the rearview mirror now, for better or worse. The lessons learned from the debacle, however, should be remembered by any other organization mulling a similarly sexy acquisition. Investors would be wise to remember these lessons too, just to make sure any highly lauded dealmaking is actually going to be of benefit to a would-be buyer.

Three lessons stand out above the rest.

Understand what you're buying

When independent of Verizon, Yahoo's top brass loved the fact that Tumblr came pre-packaged with 300 million regular monthly visitors. More than 120,000 newcomers were signing up every day as well. At a time when Facebook was sporting red-hot growth and Twitter was finally reaching its full stride, Yahoo needed something big to break into the social media space. And, it needed it fast.

Tumblr wasn't quite what it seemed to be with just a quick glance, however. Aside from the fact that more than 10% of its content was pornographic in nature, comparable levels of the web traffic it faciliated was to or from other pornography websites. To that end, Tumblr's users were mostly anonymous, making them even more difficult to market to would-be advertisers who need detailed information.

And, Tumblr's sales teams did end up struggling to market the platform, unable to explain the upside to their customers.

Have a plausible plan

It's arguably a sub-category of the previous lesson, "Understand what you're buying," but it merits a stand-alone mention. That is, dealmaking must be made with a purpose or strategy in mind. Mere access to 300 million users isn't enough. What specifically can be done to monetize them that isn't already being done?

At the time, then-CEO Marissa Mayer had what could be technically construed as a "plan." That two-fold plan was to apply Yahoo's capacity to personalize web-search experiences to Tumblr's content and simultaneously leverage Tumblr's billions of blog posts by adding them to Yahoo's searchable media. The end result was meant to be a bigger and more powerful marketing machine.

It was never a plausible prospect, however. As John Matthews, managing director of investment banking firm DeSilva+Phillips, bluntly explained in 2017 when it was clear the pairing had flopped, "Tumblr wasn't designed by its founder David Karp to really be an ad-monetization platform."

Consider doing it yourself

Finally, the idea of acquiring an established brand with millions of users already in tow seems like a savvy move on the surface. Speed is critical when rival social media sites are rapidly becoming a habit for consumers.

The easy and fast way isn't necessarily the best way in the long run, however. Yahoo may have been better off using its then-800 million regular monthly users as the foundation for a new social networking option.

What that might have looked like is anyone's guess. Social media was still young and undefined at the time, and Yahoo could have introduced a new spin on the idea. Or it could have created a clone of Facebook that integrated with Yahoo accounts. Or, it could have launched a hybrid of Twitter and Facebook. It didn't do any of those things, though, and missed an opportunity to more meaningfully monetize a few hundred million proven Yahoo fans that had grown accustomed to -- and even responsive to -- ads.

What have we learned?

It's admittedly easy to look back at the ill-fated acquisition now and pinpoint what should have been a red flag then. Even so, an honest examination at the time likely still would have led to the recognition of inevitable problems. Not enough investors wanted to see it at the time, though. The prospect of a revitalized Yahoo was simply too intoxicating.

Regardless, the Tumblr disaster's lessons are still worth bearing in mind today, and forevermore. Too many acquisitions that lack real synergy potential are still being made just for the sake of making an acquisition.

Your job as an investor is to spot the unmerited buzz of proposed deals, even if few others can when they're announced.