Cable giant Comcast (NASDAQ:CMCSA) reported its Q2 2019 earnings a little more than a month ago, and investors still seem pretty pleased with the results (shares are up 4% in the six weeks since).

And rightly so. Comcast grew its revenue 24% year over year last quarter to $26.9 billion, with adjusted profits up just a bit slower than that -- 13%. Cable TV continues to be a bit of a drag on the business, but as the company shifts its focus toward adding subscribers of any form -- and in particular, to attracting cable TV cord-cutters with its internet-only offerings -- net new "relationships" with customers expanded by 152,000 in the quarter. This led my Fool.com colleague Nicholas Rossolillo to conclude at the time that "at a reasonable 14.5 times trailing 12-month free cash flow and a dividend yielding 1.9% a year, there's a lot for investors to like about Comcast stock."

And he's not the only one to think so. 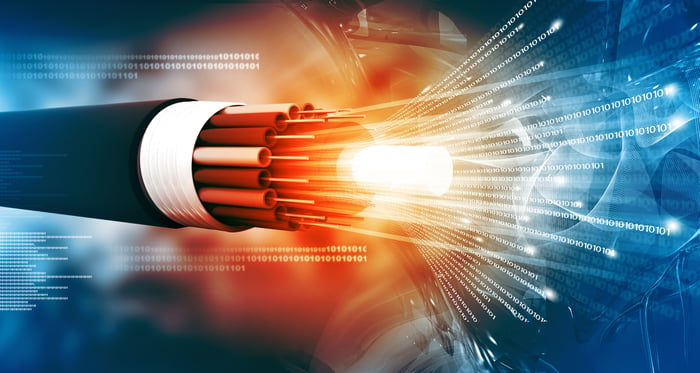 This morning, analysts at investment bank Oppenheimer upgraded Comcast stock to outperform, the first such upgrade the company has received since reporting its earnings (though Wells Fargo resumed coverage at outperform, and a handful of analysts raised their price targets, according to our friends at StreetInsider.com).

What does Oppenheimer like about Comcast? Well, the sales and earnings growth of course. "Fundamentals are healthy in the near-term, and we think 2020 is setting up to be a strong year," says the analyst in its note. While cable TV cancellations remain a concern, Oppenheimer notes that "[b]roadband strength [is] offsetting weakness in video" (i.e., cable TV).

Moreover, Oppenheimer argues that its fellow Wall Street analysts may be "underestimating advertising revenues [and] secular improvements in cable," and also forgetting to factor in "projected Sky FCF margin expansion." Cash is indeed flowing freely. Comcast generated positive free cash flow of $15.3 billion over the past 12 months, which was 26% better than reported net income. And Oppenheimer predicts that by using this cash to pay down debt, by the end of next year, the company may have worked down its debt leverage (presumably referring to its enterprise value-to-revenue ratio) from 3.0 presently to as low as 2.2.

Still, Oppenheimer's highest hopes for Comcast reside in the company's core cable communications division. This is, after all, the source of 58% of Comcast's revenue, according to data from S&P Global Market Intelligence -- and of 74% of its earnings before interest, taxes, depreciation, and amortization (EBITDA -- often a favorite valuation tool among analysts tracking tech and telecom stocks, which can spend heavily on capital investment, depressing their reported GAAP net earnings).

"We think cable can become a 50%-plus EBITDA margin business" for Comcast over time, argues Oppenheimer, as the company spends less on capital investment, "while still growing broadband share and pricing with superior service." The analyst seems particularly optimistic about the fact that Comcast now offers "1 gig" broadband internet availability to "nearly 100% of its network." The higher prices it charges for such speeds lead Oppenheimer to predict that Comcast will grow its average revenue per user at a steady rate of 4% annually.

With minimal capital investment, that additional revenue could drop more or less directly to the bottom line, supercharging an earnings growth rate that most analysts already agree should exceed 10% over the long term.

Of course, it's not all good news for Comcast. Oppenheimer highlights the risk that competition from 5G internet over mobile phones may pose to the company's wired broadband internet business -- but the analyst doesn't see this becoming a major factor "until 2021 or later."

Of more concern to me is the question of whether Comcast customers will continue to pay up for the "1 gig" internet service in which Oppenheimer sees so much potential.

As you may recall, just last month The Wall Street Journal published an extensive report on internet speeds and internet usage by consumers. Consistent with Oppenheimer's hopes for Comcast, the Journal observed that these days, "Americans are spending ever more for blazing internet speeds, on the promise that faster is better."

But here's the thing: Surveying a panel of internet users buying cable internet packages of 100 Mbps or better, the Journal noted that, on average, even customers streaming seven internet services (such as Netflix, Hulu, and YouTube) simultaneously used only about 7.1 Mbps of their available capacity -- meaning that 93% of the speed they were paying for, they did not actually need. A typical user subscribing to "1 gig" internet, accordingly, would be utilizing less than 1% of the speed being paid for.

WSJ's conclusion: "Typical U.S. households don't use most of their bandwidth while streaming and get marginal gains from upgrading speeds." When they buy Comcast's marquee broadband internet product, therefore, they are in essence wasting their money.

So what's the risk here? Currently, customers are demanding ever more "speed and capacity" from Comcast, and the company is happy to provide it, helping to keep growth going even in the face of the cord-cutting trend. But if consumers eventually wise up and realize they don't need all this speed -- or need to pay Comcast to provide it -- then Oppenheimer's hoped-for growth rate could be stymied.

Even at 14.5 times free cash flow, this is a risk investors cannot afford to ignore.