Twitter (NYSE:TWTR) has been one of the hottest tech stocks this year, rising more than 57% year-to-date. It's outperformed some of the biggest names in tech, including Facebook (NASDAQ:FB), Amazon.com, and Apple.

This is a bit of uncharted territory for a stock that's been much maligned over the years and sometimes an afterthought in the industry. Twitter has struggled since its IPO nearly six years ago, and it wasn't until the latter half of 2017 that its ascension began anew. The big question is whether it can go even higher from where it is today. 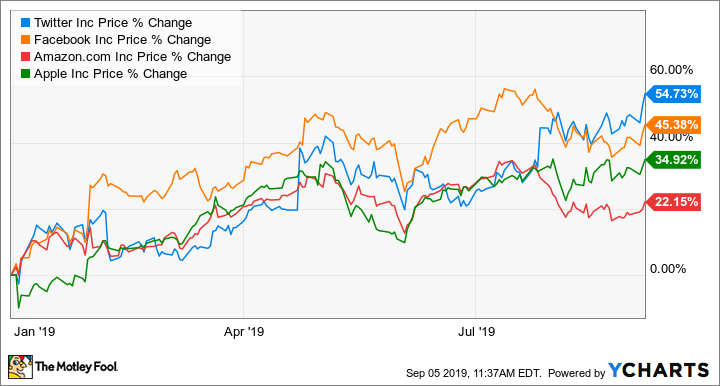 Financials and users are showing improvement

So far in 2019, the company has beaten expectations for both the first and second quarters, which has likely been a catalyst for the stock's strong performance this year. Prior to 2018, when Twitter reported a net income of $1.2 billion, losses were the norm. It has since been a model of consistency, posting a profit in each of its past four quarters. The results have been strong not only on the bottom line but on the top line as well, with revenues rising 18% year over year in Q2. Twitter credits domestic growth as the key reason.

As we've seen with Snap and Facebook, the hype around tech companies is normally all about the users, and Twitter has been growing in that regard as well. A key metric for the company is monetizable daily active users (mDAUs). In Q2, this number grew to 139 million, which was up 14% from the previous year and up 26% since 2017. Global advertising revenues -- $727 million -- were also up as a result, climbing 21% from last year and 49% from the year before that. Overall, Twitter has been seeing a lot of good growth among its key metrics both internationally and domestically and shows no signs of slowing down.

How much higher can the stock go?

Twitter has recently hit a new 52-week high of $45.20, and it could be poised for even bigger increases, especially with strong earnings numbers and a growing user base. Trading at a price-to-earnings (P/E) multiple of around 15, Twitter is still relatively cheap compared to its peers -- Facebook, for instance, trades at more than 30 times its earnings. (Admittedly, Facebook does have many more users than Twitter.)

However, even if Twitter's share price climbs over $60, its P/E ratio would only rise to about 20, and it would still be considered a relatively undervalued tech stock. While that $60 range would still be nowhere near its all-time high of more than $74, which it reached in its early IPO days, it would still be a significant return from where the stock is today.

If Twitter can keep on producing strong growth numbers, it wouldn't be surprising if investors started placing more of a premium on the stock. There's still a lot more room for it to grow, and that could make it a great buy today.