August 26 might be the single worst day in 2019 for the pharmaceutical industry. An Oklahoma judge found industry giant Johnson & Johnson (NYSE:JNJ) guilty of deceptively marketing its opioid drugs as being non-addictive despite requests from the U.S. Food and Drug Administration to stop. Currently, there are 2,000 more opioid-related lawsuits pending across the country against the company, led both by private parties as well as government officials. While the issue has been gaining ground since the early 2000s, this verdict is expected to be a hallmark case for other drugmakers concerned that further legal actions could be marshaled against them in the near future.

The question pharmaceutical investors need to ask themselves is how big of a deal is this verdict, and which stocks are safe from the potential legal fallout which could ensue in the months and years to come? 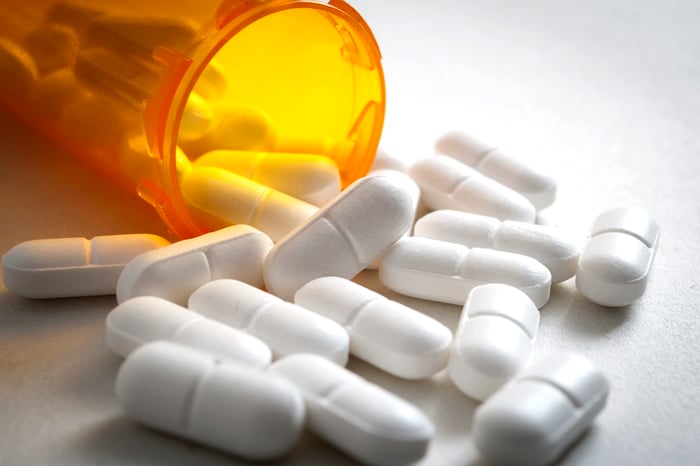 Breaking down the verdict

Judge Thad Balkman said the prosecutors proved that Johnson & Johnson used a misleading marketing campaign to convince consumers that opioids weren't addictive and were a suitable and safe treatment option for chronic pain. "The increase in opioid addiction and overdose deaths following the parallel increase in opioid sales in Oklahoma was not a coincidence," said Balkman at the ruling.

The key thing to note is that the judge fined Johnson & Johnson $572 million, with the intent that the money be used to help people who are addicted to opioids seek treatment and recover. This amount was far less than the $17.1 billion state prosecutors were demanding and in the end, the ruling was quite mild. The problem wasn't so much that Johnson & Johnson was incorrect in its assertions about opioids being non-addictive. Rather, it came down to the fact that company officials knew about opioids' addictive nature and purposefully danced around the issue in its sales campaigns, even after insistence from the FDA to stop. It was at this point where the company's marketing went from distasteful to illegal, and the ruling was more of a punishment for Johnson & Johnson's unwillingness to change its sales tactics than anything else.

From a financial perspective, the fine is just a drop in the bucket. Johnson & Johnson reported revenues of $81.3 billion in revenue for the 12-months ending on June 30, 2019. Net income during that same period was $16.3 billion. Johnson & Johnson's cash reserves are also healthy with $15.3 billion on the balance sheet. Taking this $572 million hit isn't a huge deal. The real problem is that this ruling opens the door to thousands of other cases across the country. Should Johnson & Johnson lose its appeal of this verdict, a master settlement between all of the other states with claims against the company could be far more impactful. While Johnson & Johnson would have to agree to any such settlement, it's likely that the company would prefer this route to going back to court. Although Oklahoma's ruling was comparatively mild in that it rejected the prosecutors' demands for $17.1 billion, other states could be far more harsh in punishing Johnson & Johnson. Even if only a handful of states agree to fine the company the full amount requested by prosecutors, all these settlements collectively could cost the company tens of billions of dollars, if not hundreds of billions of dollars.

All of the above pharmaceutical companies are now in hot water, as subsequent lawsuits are likely to be on the way following the Johnson & Johnson ruling. Many of these companies are already in dire financial straits and can't afford billion dollar payouts. Privately held Purdue Pharma is already the first casualty, offering between a $10 billion and $12 billion settlement for its opioid lawsuits, leaving the company bankrupt.

McKesson (NYSE:MCK), Mallinckrodt, and Teva (NYSE:TEVA) are also at high risk of going bankrupt should they face similarly large fines. The first two companies are the largest opioid distributor and manufacturer respectively, and when you consider smaller Purdue Pharma's large settlement, it wouldn't be surprising if both companies faced a hundred billion dollar settlement or higher. Teva is in the opposite situation. While much smaller then some of the other companies listed above, Teva's financials have been very unhealthy. In the past quarter, its net income was a loss of $0.69 billion, while its full-year net income was a loss of $4 billion.

Which companies are safe havens from the opioid fallout?

Healthcare investors looking to take new positions should seek pharmaceutical alternatives that aren't involved in the opioid crisis. While the manufacturers listed above are in the danger zone, so too are many companies that distributed opioids. McKesson, Cardinal Health (NYSE:CAH), and CVS (NYSE:CVS) distributed billions of opioid pills between 2006 and 2012 and they are just as likely to come under fire from state prosecutors.

Almost any company that isn't a top 10 manufacturers or distributor of opioids will be relatively safe from penalties and lawsuits. One big name in the pharma sector that hasn't been implicated is Merck & Co (NYSE:MRK). Merck has been left out of these major lawsuits due to the fact that it doesn't produce the common opioid medications containing fentanyl and morphine. In fact, the company publicly markets its distance from the opioid business as well as its commitment to charitable causes helping opioid users recover from addiction. AbbVie (NYSE:ABBV) is another major pharmaceutical company that stayed out of the opioid industry for the most part and is a suitable candidate for investors fleeing the endangered pharma industry.

Pharmaceutical companies focused on the animal health market are also suitable alternatives to consider. Zoetis (NYSE:ZTS) is a world leader in this market and has seen its stock outperform the broader industry, gaining 51% so far in 2019 compared to the S&P Pharmaceuticals Select Industry Index, which fell by 5.8% during the same time frame.