PayPal Holdings (NASDAQ:PYPL) shares were soaring. Riding the wave of a steady societal shift away from cash and checks to digital payments, the company's stock price surged more than 200% from the start of 2017 through late July, compared to a 35% gain from the S&P 500.

Then came this year's second-quarter earnings release. PayPal announced that full-year revenue would be lower than originally forecast. The stock price fell about 15% on the news, and six weeks later, it still remains 10% below its July highs. The question now: Is this an opportunity to buy shares of the digital and mobile payments company or are there big problems?

If you're a long-term investor, this may be an opportunity. Despite the near-term issues, PayPal should be able to overcome the concerns, because the drop in revenue guidance was primarily driven by short-term factors, Venmo continues to grow and gain traction, and PayPal's massive and growing cash hoard is available to fund more partnerships and acquisitions. 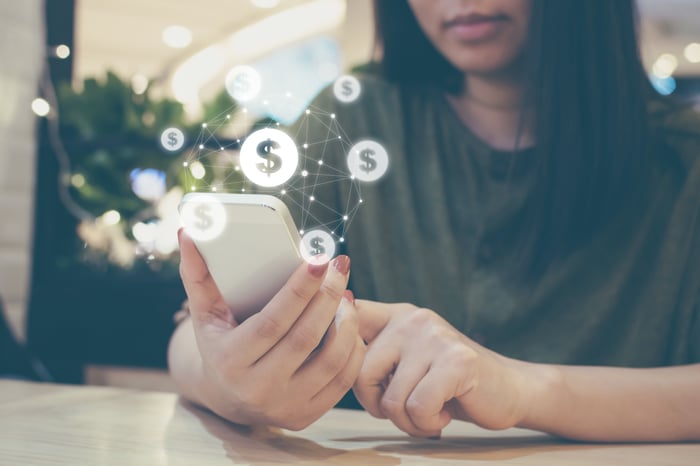 Management: 'A matter of when not if'

To know whether PayPal is a good investment, it's important to understand what caused the stock price to fall.

When PayPal released second-quarter earnings July 24, it beat Wall Street expectations for adjusted earnings ($0.86 per share vs. $0.69) and narrowly missed consensus estimates on revenue ($4.31 billion actual vs. $4.33 billion estimated). Management raised full-year adjusted earnings guidance to a range of $3.12 to $3.17 per share. But here is what got investors' attention: Revenue guidance was lowered by about $275 million to a range of $17.6 billion to $17.8 billion.

What happened? Management said a delay in launching new services with strategic partners was the biggest issue, although a postponement of price changes and negative effects of currency exchange were also factors.

Implementing services on partners' platforms is a key strategy for growth, and management was too optimistic in estimating how soon projects would be completed. PayPal CEO Dan Schulman was emphatic, however, in saying this is a delay, not a loss, of revenue: "This is a matter of when, not if. And when we talk about when, we're talking about the next several quarters."

Schulman said management's focus would be on making sure "that we're building the right sustainable long-term things for this business. And if we've got to delay something a quarter or two, so be it to make that we do this the right way."

The company's focus on quality services, instead of the pressure of quarterly expectations, should hearten long-term investors ... as long as management executes its strategy.

PayPal's health can be measured in a few key metrics: active accounts, payment transactions, total payment volume (TPV), and engagement (how many times someone uses the platform in a year). Those metrics continued to show solid growth.

One key driver has been Venmo, a fast-growing peer-to-peer (P2P) payments app that's especially popular with young adults. Venmo provides a quick, easy way to transfer money among friends, and features a Facebook-like feed that allows users to share their financial activity with friends. Venmo's second-quarter TPV continued its torrid growth, increasing 70% year-over-year to over $24 billion. It has become roughly 14% of PayPal's overall TPV, and management continues to forecast $100 billion in TPV in 2019.

As the next quarterly report approaches in October, investors will want to see continued growth from Venmo, which is not yet profitable because the company is just now beginning to monetize the platform. In its second-quarter call, management said about 15 million Venmo users have "engaged in a monetizable transaction." (Management didn't update the user base total but reported 40 million after the first quarter.)

Despite not yet being profitable, Venmo gives PayPal a large, desirable user base: millennials who soon will be in their peak spending years. In addition, more businesses are accepting payments from Venmo, allowing those millennials to use Venmo for more than just P2P transactions. The resulting transaction fees are a path to future revenue growth.

The fierce competition in the payment platform space means PayPal must find ways to attract merchants and consumers who will adopt the platform.

It takes money to fuel that growth, and PayPal produced $1.04 billion in free cash flow, a whopping 24% of revenue, in the most recent quarter. (It also had $10.7 billion of cash and investments on the balance sheet.)

Management said it constantly considers acquisitions and strategic partnerships and expects to spend $1 billion to $3 billion a year on them. This year, PayPal already has invested $500 million in ride-sharing company Uber Technologies (NYSE:UBER) and another $750 million on a partnership with Latin American e-commerce giant MercadoLibre (NASDAQ:MELI).

International growth is important because digital payments are accelerating at a faster pace overseas. Nearly 44% of PayPal's second-quarter TPV was international, and the company wants to build on that base.

Even after the stock's drop, PayPal is up 23% in the last year, versus a 1% gain for the S&P 500. Given that strong performance, it's not surprising that some investors would sell shares and take profits after a reduced revenue forecast.

But that's a short-term view of a company that appears to have solid long-term growth strategies, and the cash to implement them. Now could be a good time for Investors with a long-term view to take a closer look at PayPal.