The stock of consumer-finance credit specialist Synchrony Financial (NYSE:SYF) declined by 10.7% in August, according to data from S&P Global Market Intelligence.

If not for external headwinds, Synchrony shares may well have risen modestly in August. The company reported fairly strong second-quarter earnings in late July. Synchrony's net interest income jumped 11% year over year, driven by its acquisition of PayPal's consumer-credit program in July 2018, as well as by organic growth in its receivables portfolio. The higher interest income, coupled with a lower provision for loan losses and higher "other" income, pushed net income up 22% over the prior-year quarter, to $853 million.

However, investors worried about two headwinds that could potentially compress Synchrony's performance in the months ahead. First, escalating tariffs announced by the Trump administration on $300 billion worth of goods imported from China are expected to impact prices of consumer items later this year. Up until now, much of the import duties in the ongoing trade war have impacted the manufacturing sector, but consumers may see prices rise on common household items and electronics this fall. This may curtail consumer spending, potentially leading to lower receivables balances and interest income for Synchrony, which benefits when cardholders tap into their available credit.

Second, declining yields on government debt are affecting banks' profit margins, as banks make a smaller spread when investing customer deposits in lower-interest-yielding debt. This is a phenomenon that investors interested in investing in banking and consumer-credit stocks should be aware of. The yield on 10-year and 30-year U.S. Treasury instruments declined noticeably in August. Synchrony's shares are often affected by banking sector sentiment. 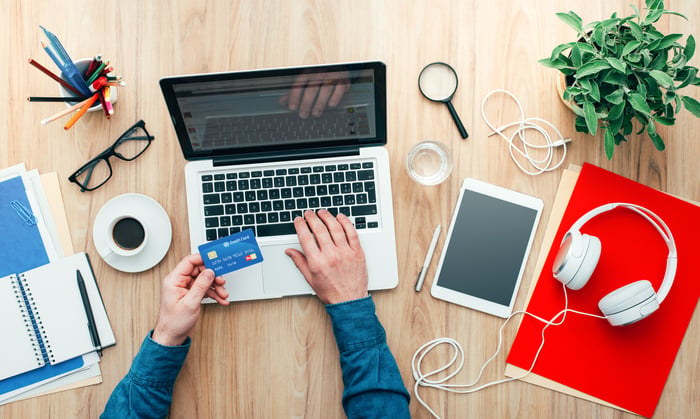 Synchrony shares may currently be pressured by sentiment over tariffs and Treasury yields, but it's important to note that the company also expands its income through sheer growth in its receivables portfolio. Therefore, the aggressive acquisition of new credit card partners -- a strength of this company -- may help it offset a slowdown in consumer spending and withstand margin pressure in the coming quarters.