Facebook (NASDAQ:FB) has now made its Dating feature available to everyone in the U.S. The social network launched its dating app in 19 other countries before entering the U.S. market, starting with Colombia last May and quickly followed by Canada and Thailand. It must have seen some success with the feature, and it's now ready to take on the U.S. dating market.

That could be bad news for Match Group (NASDAQ:MTCH), which investors sold off heavily following the news of Dating's U.S. launch on Thursday. While its apps like Match and Tinder have strong user bases, Facebook Dating could do to Match's apps what Instagram Stories did to Snap's (NYSE:SNAP) Snapchat. 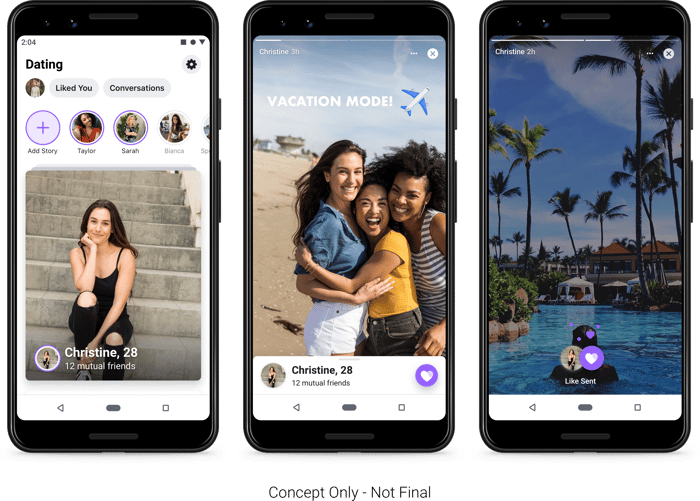 A quick walk down memory lane

For those who don't remember, the launch of Instagram Stories coincided with a significant slowdown in Snapchat's user growth. That slowdown continued for several quarters and was exacerbated by the botched app redesign early last year.

Instagram Stories benefited from a couple of advantages. First, Instagram was already installed on over 500 million users' phones; it now has over 1 billion users. That established user base means it'll get a significant amount of adoption for any new feature it introduces.

The second advantage was the prominent placement of Instagram Stories within the app -- right at the top of the user interface. Stories are the first thing you see when you open Instagram now. That, combined with the early adoption from select users, created massive awareness of the feature and set it on a path to surpass Snapchat's user base in quick order.

Today, Instagram Stories is one of the biggest engagement drivers for Facebook and a key source of revenue growth. Snap, meanwhile, is just getting back on the right track with its user growth.

Will the same thing happen to Tinder, Match, and OkCupid?

Facebook Dating, like Instagram Stories, won't receive a separate app. It's integrated into the main Facebook app, which is installed on around 244 million American and Canadian phones. That integration could spur user adoption, and it's been Facebook's strategy of late, instead of giving every feature its own app.

Match doesn't disclose how many total users it has, but it does provide quarterly updates to its paid subscriber count. That number reached 9.1 million last quarter, with about half of those in North America. To put that in perspective, Facebook would have to attract about 2% of its North American users to equal Match's subscriber base in the region. Granted, that's not exactly an equal comparison, but also consider that Facebook isn't selling subscriptions at all (at least not yet).

And Facebook has several significant advantages over Match besides already being installed on users' phones. First and foremost, it has access to tons of user data to improve its matching algorithm. While users on Tinder might say they like dogs, Facebook knows whether you own a dog, how many pictures you take with dogs, and whether you're in any dog-related groups. So Facebook knows exactly what you mean when you say you like dogs.

Second, Facebook is planning to integrate Instagram Stories into Facebook Dating in order to give users a better look at the day-to-day life of a potential date. Match also offers Instagram integration, but likely can't offer the same level of features as Facebook will.

In other words, Facebook is making it far easier to get started and share yourself with potential suitors than setting up a fresh profile on a brand-new app. That could stymie Match's user growth.

Facebook isn't currently running ads or selling subscriptions for Dating. So investors may be wondering what kind of value they can expect from the feature, at least in the near term.

The biggest potential benefit is re-engaging younger users with Facebook's core app. The flagship app has struggled to remain exciting for younger users, who are more likely to flock to Instagram or Snapchat. The company's plans to integrate Instagram Stories into Dating are telling of the company's effort to attract that demographic back to its main app.

If there's been one complaint about Facebook Dating in countries where it's already launched, it's that the demographics skew older. And dating is a young person's game. Facebook will have to work to attract more young people to the app if it's going to succeed, but that could result in more young people scrolling through News Feed and other core Facebook features as well.

Long term, there's considerable potential for direct revenue if Facebook can establish a user base. Match, for example, generated $1.9 billion over the past four quarters from selling subscriptions to its various dating apps. Facebook may be able to do better by selling advertising.

Investors should keep an eye on management's quarterly commentary about the progress of attracting users, specifically younger ones, to Facebook Dating.