Sonos (NASDAQ:SONO) was a pioneer in high-end sound systems, but it may be lower cost speakers that come to define this audio company.

A partnership with Swedish furnishings company Ikea promises to change how Sonos is viewed by consumers and investors, and September may be the month where its stock truly breaks out from what has otherwise been a cautionary tale for IPO investors. 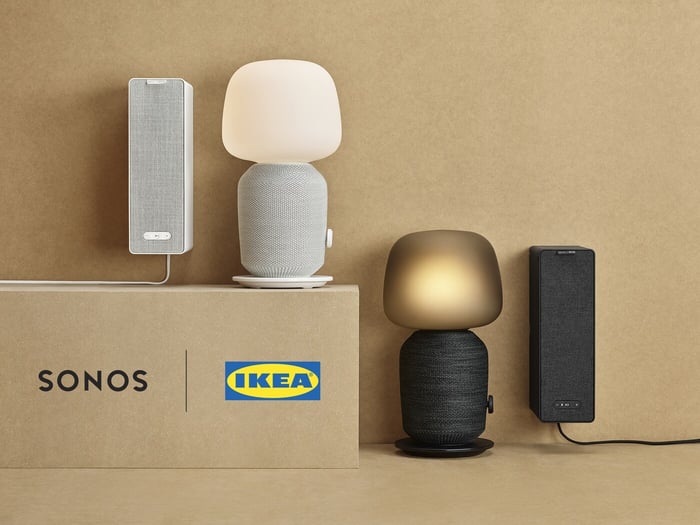 The groundwork for growth started early

The seeds for this recovery began sprouting before Sonos speakers disguised as furniture appeared in Ikea stores last month. Its fiscal second-quarter earnings report showed revenue from its Asia Pacific (APAC) region jumping 48% from the year-ago period as Sonos modules, or the sound components used in Ikea's products, were received by the furniture maker's manufacturing partner to be assembled.

But it was in the third quarter where revenue took off. APAC revenue surged 168% from last year, and the consumer electronics company reported overall revenue growth of 25% year over year to $260 million.

Although the module revenue amounted to just a $17 million increase for a total of $26.3 million, or 10% of the company's top line, it was simply the beginning as Ikea began manufacturing what would become its Symfonisk line of bookshelf speakers and lamps with built-in Sonos technology.

The speakers, ranging in price from $99 to $179, went on sale last month to positive reviews from media and consumers alike. Filling in as both furniture and accessories, they're functional and help minimize the space required for components, a consideration not to be dismissed lightly for apartment dwellers, who likely make up a large segment of Ikea shoppers.

Online lender Earnest found consumers in their 20s and early 30s were mostly likely to shop at Ikea, with the peak age being 24, and dropping off markedly after 34. It was the only home furnishings retailer out of 14 national chains whose prime customer was under 30.

Moreover, the bookshelf speaker can function as a shelf itself when mounted horizontally to a wall, with the ability to hold about seven pounds (assuming you don't mind an electrical cord running down your wall, which Ikea set designers seem especially fond of). The lamp and bookshelf speaker also connect to your Wi-Fi network and integrate with other Sonos speakers.

The brand is in 300 Ikea stores in 18 countries at the moment, and is looking to expand into more countries next year.

Holding its own in the speaker wars

It's a decidedly different approach for Sonos than when it began with its premium speakers and component collections. But the change was necessary -- the ubiquity of low-cost Echo devices from Amazon.com and Alphabet's Google Home speakers has made it more difficult for higher priced models to thrive.

Apple similarly discovered the problems with pricing its smart speakers out of the market. Sales of the HomePod have been a disappointment, and it lost market share in the latest period.

The Ikea Sonos speakers may not be as cheap as an Echo, but consumers are getting a high-quality speaker with enhanced sound capabilities at a more affordable price. They don't have a microphone, so that might limit utility for some, but the company's line of smart speakers such as the Sonos One and Sonos Beam continue to sell well and helped sales of its wireless speaker division (which makes up most of Sonos' revenue) rise 22% in the third quarter to almost $105 million. Home-theater speakers represented $89.7 million of revenue, a 34% increase from last year.

The results helped Sonos significantly narrow losses for the quarter, declining from $27 million, or $0.45 per share, in the prior-year period to $14 million, or $0.13 per share, which was also much less than the $0.23 per share loss Wall Street had been anticipating.

With heightened expectations for its collaboration with Ikea, Sonos, which has struggled to climb above its IPO price as of this writing, may see September turn into the month when it crosses that threshold and really takes off.