Anheuser-Busch InBev (NYSE:BUD) has been one of investors' favorite adult beverage stocks in 2019, with shares of A-B InBev surging more than 40% year to date, compared to the alcohol industry as a whole's 29% gain. A-B InBev wants to keep that success going with a new sponsorship, announced on August 28, that will make Bon & Viv the official hard seltzer of the NFL.

Hard seltzer is the new "it" drink, with sales skyrocketing over the last few years, according to Nielsen data. This growth has largely been driven by millennials, who have embraced hard seltzer as a low-calorie drink of choice. Although, A-B InBev's Bon & Viv is only the 3rd best selling hard seltzer in the market, the company is hoping that partnering with the most popular sport in America will help Bon & Viv bubble to the top. 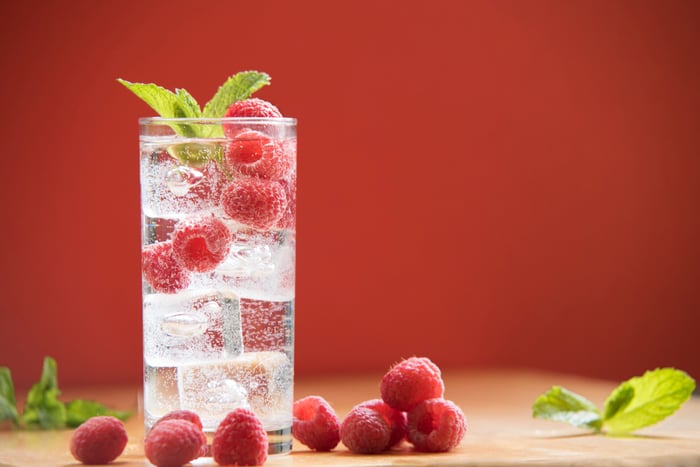 Over the last two summers, you couldn't go to a barbecue without seeing a hard seltzer in the cooler.

That is because you couldn't miss the hard seltzer market. Sales spiked by 170% in 2018, equating to about 2% share of the beer market. The party hasn't stopped in 2019 either, with sales growing nearly 200% and 164% of the growth coming in July alone, according to Nielsen data. Nielsen also estimates that the hard seltzer market could be worth a billion dollars by the end of 2019 , doubling sales from the year before. This makes the hard seltzer industry an area of great interest for adult beverage companies who are trying to take advantage of the up-and-coming market.

A-B InBev is taking a page out of Bud Light's playbook by partnering with the NFL to elevate Bon & Viv's market share. Bud Light has been the official beer of the NFL since 2011 and is an excellent example of how A-B InBev plans to use the NFL sponsorship to help grow Bon & Viv. During its time as the NFL's official beer, Bud Light has kept its position as America's most popular beer, maintaining a market-leading 15 to 18% market share during that time. Also, don't forget that A-B InBev is the same company that launched the viral "Dilly Dilly" campaign using its NFL partnership last summer. The "Dilly Dilly" campaign may have been a contributing factor to A-B InBev's standout 1.9% rise in beer sales in June of 2018. Along with marketing to the largest viewership in all of American sports, Bon & Viv will also take advantage of other exclusive sponsorship perks that Bud Light has utilized in the past, such as putting NFL teams on its cans, using the official NFL shield in advertising, and allowing Bon & Viv to be sold in NFL stadiums.

In the past, A-B InBev has used the NFL sponsorship with Bud Light to boost sales, and it is planning on using that same strategy to position itself as a major player in the potentially billion-dollar hard seltzer market. So this Sunday when you are watching your favorite team, keep an eye out for Bon & Viv and remember that 15.8 million other football fans and investors will be seeing A-B InBev's hard seltzer as well.