Saturday was a bittersweet day for fans who enjoy sipping free Beverly at Disney's (NYSE:DIS) Epcot, and not just because the tart Italian carbonated beverage is also notoriously bittersweet in taste. Disney World's second-oldest theme park is the next gated attraction slated for a major overhaul, and that makeover continued over the weekend with Club Cool and several nearby attractions closing down.

Club Cool is slated to reopen again in some capacity, but the same can't be said for some of the exhibits, retail locations, and character greeting areas that are going away forever to clear the space that Disney imagineers need to refashion the resort's most stagnant theme park. Epcot was Disney World's second most-visited theme park through the first 34 years of its history. It slipped to third in 2017, and if it doesn't slide to fourth place this year, it will certainly do so come 2020. There are just four Disney World theme parks, so we're talking about going from being silver medalist to dead last in just two or three years. 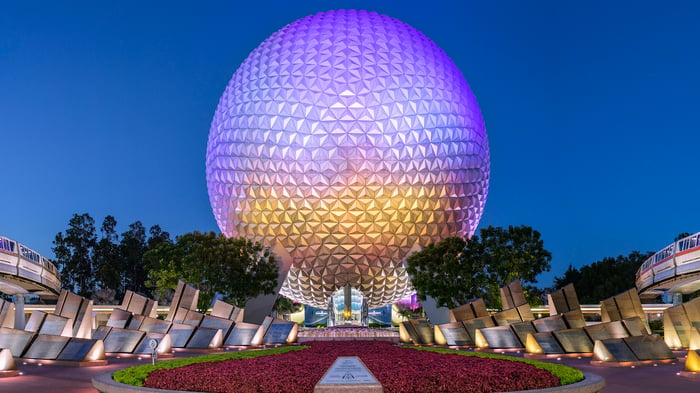 Epcot needed some serious refreshing to remain relevant. It already has a few new attractions in various phases of construction. Space 220 -- a richly themed restaurant where guests will board a multimedia elevator that will whisk them to a space station surrounded by projections of Earth and other celestial bodies will open in the winter. A Ratatouille-themed dark ride will open in the France pavilion next summer. The park's first roller coaster -- Guardians of the Galaxy: Cosmic Rewind -- will open by 2021, and it could be a bar-raising experience beyond giving Epcot a much-needed thrill ride to lure younger visitors. The ride is being billed as a "storytelling coaster" with fully rotating seats, featuring the first reverse launch on a Disney coaster.

A new Mary Poppins attraction, digital gaming metropolis, multilevel festival center, and Moana-themed interactive water experience will also be coming in the next couple of years. Films will be updated across most of its current theaters.

The new Epcot will be pretty spectacular, but as we learned with Disney's Hollywood Studios -- the last Disney park to conclude its multiyear makeover with the opening of Star Wars: Galaxy's Edge last month -- the transitions can be challenging. Older rides and experiences need to close for their replacements, and the lulls between construction and reality can make the park a hard sell. Social media is already offering up mixed reviews for the Epcot International Food and Wine Festival that launched two weeks ago, in part because it's missing the traditional festival center that served as a hub for workshops, retail offerings, and treat samples.

The resort prides itself as a weeklong vacation destination, but that's going to be tricky with an iconic park becoming a hard-hat zone in the near future. Consumer-facing companies at the mercy of discretionary income can't afford long breaks between updates.

Disney realizes that it's going to have to market the future to make up for its incomplete present state, so next month it will open a preview center. The Walt Disney Imagineering presents the Epcot Experience will open in the Odyssey pavilion, ideally getting visitors excited about the things that they will get to experience in a few years. It will be bittersweet, especially given the substantial hike in theme park ticket prices that Disney rolled out this year -- but sometimes life can be like a small paper cup of once-complimentary Beverly.