If a year-to-date share price loss of 1% is the chosen measure, then on the surface, Limoneira's (NASDAQ:LMNR) lemon harvest woes don't seem particularly troublesome. View the last trailing 12 months of the consumer staples stock's performance, however, and its state appears more serious.  The LMNR symbol has lost 38% of its value over the last year, and problems related to the 2019 harvest are preventing it from recovering ground. Limoneira reports fiscal third-quarter 2019 earnings after the close of trading on Monday. That's likely to prove a pivotal report for the Santa Paula, California-based company.

Limoneira has dealt gamely with the consequences of heavy rainfall in southern California in the first six months of its fiscal year --the six months ended April 30, 2019). The rains resulted in an "overabundance" of large lemons, which has depressed carton pricing and volume across the industry.

After the company's second-quarter report in June, I observed that as harvesting progressed, Limoneira had been forced to cut its earnings estimates twice in as many quarters. In that article, I shared the progression of earnings reductions in the following table: 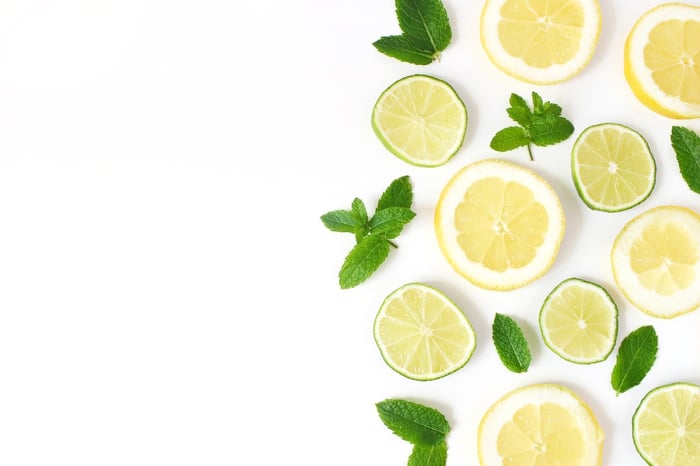 Alas, the revisions didn't end with the second quarter. On Aug. 28, the citrus agribusiness issued another interim warning. In this document, management relayed that during the third quarter, it became apparent that selling prices were still depressed -- average carton pricing of $18 was well below normal levels. For comparison, average carton pricing hit $26 and $24.50 in the fiscal third quarters of 2018 and 2017, respectively.

To make matters worse, Limoneira found tepid demand for its mega-sized lemons over the last three months. The company was forced to turn 50% of its third-quarter lemon inventory into juice, negatively impacting revenue and margins, but literally proving the old adage that you should strive to make lemonade when life gives you lemons.

Limoneira is still on track to achieve record domestic and international lemon volume this fiscal year, but the poor harvest utilization has caused management to now project an operating loss for the year. I've updated the previous table to incorporate executives' newest forecast for the operating loss and adjusted EBITDA expectations:

Implications of the upcoming third-quarter report

The current fiscal year has been a slow-moving debacle for Limoneira, at least vis-a-vis earnings, and undoubtedly management and shareholders are looking forward to a new year and a new harvest. On a positive note, the August update disclosed that early in the fourth quarter, normalizing fruit sizes have led to a rebound in pricing -- lemons are presently averaging $21 per carton. Of course, this won't be enough to change the trajectory of fiscal 2019.

After this latest earnings revision, Limoneira shares are priced at 30 times forward earnings, meaning that they still trade at a premium to comparable small-cap companies. According to investment consultancy Yardeni Research, the aggregate forward price-to-earnings ratio for the Russell 2000 index currently sits at a reading of 22. So it's quite possible that if Limoneira revises its full-year estimate for a fourth time this year on Monday, investors may lose patience and shave a bit of the premium off shares.

However, if the lemon grower simply holds firm to the latest full-year forecast, it can focus attention on the many initiatives under way to expand lemon acreage and diversify earnings. These include Limoneira's recent investment in an Argentinean citrus joint venture which operates over 1,200 lemon-bearing acres, and its residential real estate development, Harvest at Limoneira, which moved into the sales phase this year. Limoneira's chances for a share-price rebound this week, and the rest of the calendar year, will thus depend on a condition which can be summed up in three short words: no new surprises.