Target (NYSE:TGT) is taking a hard line against tariffs, telling its suppliers of Chinese goods the retailer will not accept the higher costs and they will have to absorb all of the impact.

With some $112 billion worth of goods getting whacked by an increase in the tariff rate to 15%, Target let it be known that it was protecting its customers from bearing the brunt of the escalating trade war. CMO Mark Tritton wrote in a note to vendors, "Target will not accept any new cost increases related to tariffs on goods imported from China. Our expectation is that you will develop the appropriate contingency plans so that we don't have to pass price increases along to our guests."

While media reports seemingly supported the retailer's position, it's reasonable to ask how successful Target will actually be. China is the largest source of imported goods for the company, which means the retailer may be using it more as a negotiating tactic rather than a real cudgel it can wield in the trade war. 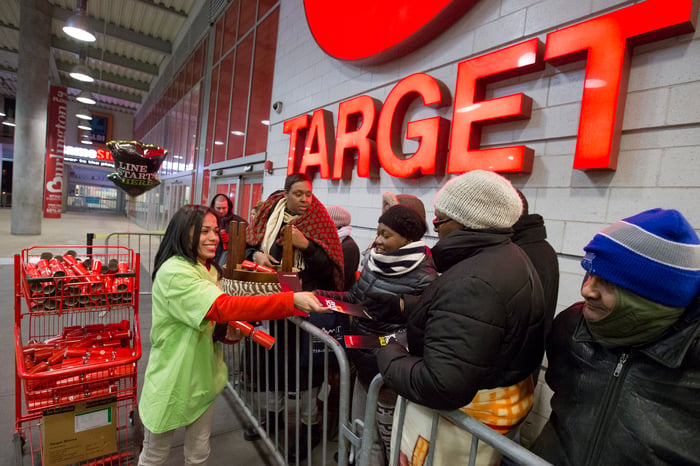 Everyone is hurt by trade wars

On Sept. 1, President Trump raised the tariff rate on goods such as footwear, apparel, and some technology items from 10% to 15%, while another $250 billion worth of imports will be tagged on Oct. 1 when rates rise to 30% from 25%. A final tranche of tariffs will go into effect on Dec. 15 on $160 billion worth of goods.

Because trade wars are messy affairs, it's the consumer that ultimately pays the cost, not the retailer or the target country. And most often that cost spills over into goods and services other than those originally affected.

Trump's tariffs on steel and aluminum imports from Europe, for instance, caused those regions to retaliate against Harley-Davidson motorcycles and Jack Daniel's whiskey. And in response to the latest round of duties that were just raised, China retaliated by hiking tariffs on U.S. beef, pork, and chicken, as well as soybeans and cotton. In December, rates on U.S.-made cars and agricultural goods will go up.

Many tactics needed to survive

During the earlier rounds of the tit-for-tat trade war, retailers were able to mitigate the impact of the higher tariffs by deploying a number of strategies, whether that meant ordering extra merchandise early or negotiating with vendors to make the increased costs more of a shared burden.

Target CEO Brian Cornell noted on the retailer's first-quarter earnings conference call that it was able to sidestep a good part of the tariff increases by making "some very specific surgical decisions to invest in inventory, specifically in categories like toys and baby and holiday as we are preparing for the season."

While pulling forward inventory is still one of the arrows in its quiver, Target seems to be indicating it has drawn a line in the sand -- but that's only possible if it is operating from a position of strength.

Limits to its power

While Target maintains that its varied merchandise gives it a competitive advantage over more narrowly defined retailers, and it has sourcing offices in over a dozen countries, it also notes in its annual filing that while a large percentage of its merchandise is sourced globally, China is "our single largest source." Trade wars, it acknowledges, could adversely impact its operations.

Target, like rival Walmart, does wield considerable power when it comes to dictating terms to vendors. Walmart is infamous for squeezing its suppliers for every last cost benefit, and Target, with over $74 billion in annual sales across more than 1,800 stores, does hold a few trump cards when it comes to costs.

But in a wide-ranging trade war such as this, even Walmart has said higher prices are coming. It might be a last resort, but there's just so far the retail behemoth can go. Target's definitive statement may end up being more elastic than it seems, and while it may be able to win some concessions, it seems likely even its customers will have to pay higher prices.