The software giant might release a smart speaker that works with Microsoft Teams.

Thus far, Microsoft (MSFT -1.94%) has mostly stayed on the sidelines of the booming smart speaker market. The enterprise software giant has primarily relied on third-party manufacturers to make devices that integrate Cortana, which Microsoft has been repositioning as an app instead of a stand-alone virtual assistant. In an interview with VentureBeat earlier this year, Microsoft CTO Kevin Scott downplayed the idea of Microsoft building its own device.

"On the smart speaker side of things, we've got a bunch of partners who are building Cortana-powered things right now and we're super excited about all of those, but it's not like we're going to have a single Microsoft-branded Cortana smart speaker that's going to be the thing that carries Cortana to customers," Scott said. 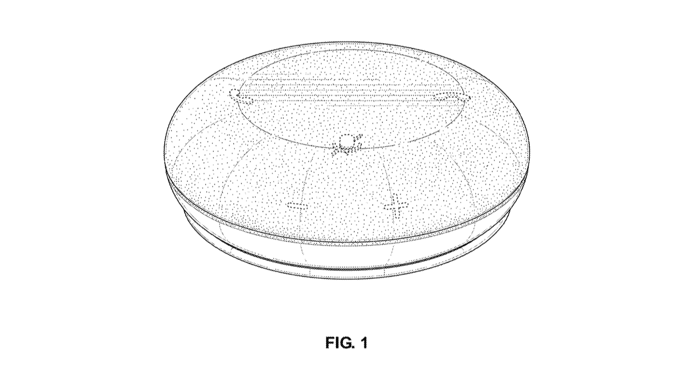 However, a 2017 patent filing that was just published suggests Microsoft could have a new smart speaker in the pipeline.

First filed back in August 2017, the design patent shows what the smart speaker might look like. The illustrations closely resemble a Google Home Mini, a small portable circular speaker that appears to be covered in fabric. The document doesn't describe any other functionalities that the product might have. As a design patent, it mostly just covers the physical aesthetics.

As usual, when it comes to patent filings, it's worth noting that many companies regularly file patents as they explore development ideas and oftentimes the patented products never see a commercial launch. Microsoft is hosting a Surface event on Oct. 2 to unveil a slew of new Surface-branded hardware. It's possible that the company could announce a new smart speaker based on the patented design.

There's another potential twist, though. As noted by The Verge and ZDNet, the listed inventors work on Microsoft's Teams, the company's enterprise messaging and collaboration platform that competes with Slack. The portable smart speaker could end up being a physical hardware extension of Teams, potentially facilitating voice calls and meetings in order to strengthen collaboration.

If the speaker does indeed launch and integrate with Teams, that could raise the competitive bar for Slack if it's a hit with enterprise customers. Slack, which has no experience building hardware, might be pressured to develop a similar device if it improves productivity.

Microsoft's first-party hardware ambitions have been ramping up for years, with the Surface revenue jumping 23% last fiscal year to $5.7 billion. At the same time, smart speakers have emerged as one of the most exciting consumer tech gadgets. Unit volumes soared an estimated 55% to 26.1 million in the second quarter, according to recent estimates from market researcher Canalys. Launching an enterprise-oriented smart speaker is a no-brainer.