The smart speaker market continues to boom as consumer adoption grows around the world. Total unit volumes in the second quarter jumped 55% to 26.1 million, according to recent estimates released by market researcher Canalys. Amazon.com (NASDAQ:AMZN) keeps leading the way, retaining its title as the No. 1 vendor, thanks in part to continuing to expand its portfolio (the Echo Show 5 was released during the second quarter).

Here's the latest data on the booming market.

Chinese search engine Baidu (NASDAQ:BIDU) overtook U.S. search specialist Google during the second quarter. While that seems like a major coup, Canalys notes that the event "bears little significance as both companies operate in mutually exclusive markets." The Alphabet (NASDAQ:GOOG) (NASDAQ:GOOGL) subsidiary does not sell smart speakers in China, and Baidu does not sell its devices in the U.S.

Baidu's volumes soared to 4.5 million during the second quarter, up from just 100,000 a year ago. "Aggressive marketing and go-to-market campaigns built strong momentum for Baidu in China," Canalys analyst Cynthia Chen said in a statement. "The vendor stood out as a key driver of smart displays, to achieve 45% smart display product mix in its Q2 shipments."

The company had introduced its Little Fish VSI smart display early last year at CES 2018. It looks strikingly similar to the Echo Show and Nest Hub families. Baidu's speakers use DuerOS, its conversational AI technology that it bills as the "'Alexa' of China." Baidu has garnered strong interest from local network operators and has little competition in smart displays, Canalys says. 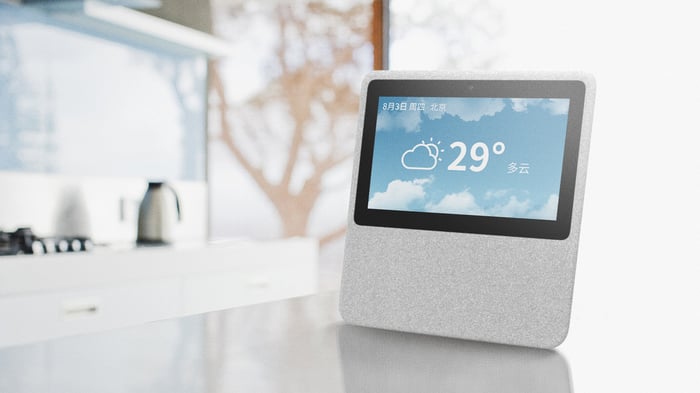 U.S. smart speaker shipments continued to exhibit weakness, falling 2.4% to 6.1 million. China had overtaken the U.S. as the largest smart speaker market in the world in the first quarter, as the U.S. is now fairly mature for the product category. Amazon and Google have now turned their efforts toward growing internationally, according to Canalys analyst Jason Low. About half of Amazon's volumes in the second quarter were shipped to international markets, with 55% of Google's shipments destined for abroad.

Google's Nest rebrand dented the search giant's performance, and the company needs to revamp its non-display smart speaker offerings to "rekindle" demand, according to Low. Nest has a strong brand domestically, but lacks recognition outside of the U.S.

Going forward, consumers will likely start to see more smart displays as vendors test out the market. "Experimentation with different price points and value propositioning strategies are to be expected," Low said.