Craft Brew Alliance (NASDAQ:BREW) says that because Anheuser-Busch InBev (NYSE:BUD) has now decided not to acquire the brewer, all options are open to it.

During a conference call to discuss where it goes from here, Craft Brew Alliance said that should it choose to go it alone and remain independent, the DNA of the company would need to be "blown up and rebuilt" because the beer industry was built for a different time and age. 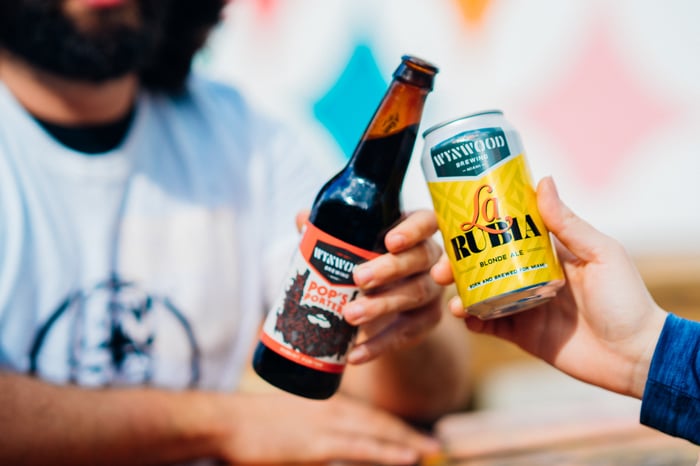 The business remains the same

As part of a broader distribution agreement signed in 2016, Anheuser-Busch had until Aug. 23, 2019, to decide whether it wanted to make a qualifying offer to buy Craft Brew at $24.50 per share. If it chose not to, the megabrewer would have to pay a $20 million incentive fee under an international distribution agreement the two had.

Anheuser-Busch, which owns about a third of Craft Brew, decided on the latter, and now Craft Brew has a world of opportunity ahead of it, and CEO Andy Thomas stressed it was truly considering all of the possibilities. In the meantime, its relationship with Anheuser-Busch remains status quo: The master distribution agreement is still in place, the contract brewing agreement is intact, and the international distribution agreement remains unchanged.

Those will remain in effect for a number of years, but Craft Brew Alliance won't wait for their expiration to decide what to do. Thomas said the brewer has all of its "building blocks" available to it and will use them to maximize shareholder value, even if it means tearing them down, rearranging them, or even getting rid of them.

But changes are coming

Part of Craft Brew Alliance's problem has been the control Anheuser-Busch has exerted. It was nothing overt, but rather was a subtle manipulation because for three years, everything hinged on whether it would make the qualifying offer for the company.

Craft Brew Alliance wasn't completely at liberty to shed certain assets because Anheuser-Busch might want the whole company, so the brewer was kept in limbo. That remains true today, even after the offer deadline has passed.

Because of the unique way Craft Brew Alliance was created over a decade ago -- first as a mashup by Anheuser-Busch of craft brewing pioneers Redhook Brewing and Widmer Brothers, then ultimately as the brewer we know today after Belgian brewing giant InBev bought Anheuser-Busch -- there are some limits to what Craft Brew Alliance can do without A-B's consent, though it's not a deterrent to creating value.

A sale is still in the mix

Activist investor Midwood Capital Management previously told the brewer it needed to put out a for-sale sign and sell itself to someone, whether it was to Anheuser-Busch or someone else. That option still stands. A-B may have felt $24.50 per share was too rich for a stock trading around $10. But even with the $20 million already paid, Anheuser-Busch could now acquire it at half the price. As could someone else, though A-B's ownership interest would complicate an all-stock transaction.

Should Craft Brew Alliance remain independent, we're likely to see it shed certain brands, maybe even the original Redhook or Widmer (or both) because they continue to drag down the brewer's performance.

Ultimately, investors didn't learn which direction Craft Brew Alliance was going, though they should feel confident the brewer is moving forward. But assuming the consumer staples company continues to be its own brewery, it may not be recognizable from what came before as the building blocks will almost assuredly be rearranged.

Craft Brew Alliance has some strong brands available to it, and it trades at a deep discount, giving it the opportunity to unlock substantial value now that the yoke of Anheuser-Busch's possible acquisition is lifted.