Please ensure Javascript is enabled for purposes of website accessibility
Log In Help Join The Motley Fool
Free Article Join Over 1 Million Premium Members And Get More In-Depth Stock Guidance and Research
By Keith Noonan – Sep 11, 2019 at 8:53AM

Shares of International Flavors & Fragrances (IFF 3.00%) sank 23.8% in August, according to data from S&P Global Market Intelligence. The company reported second-quarter earnings on Aug. 5, and the results for the period and revised guidance prompted a substantial sell-off for the stock despite news that its quarterly dividend had been raised from $0.73 to $0.75. 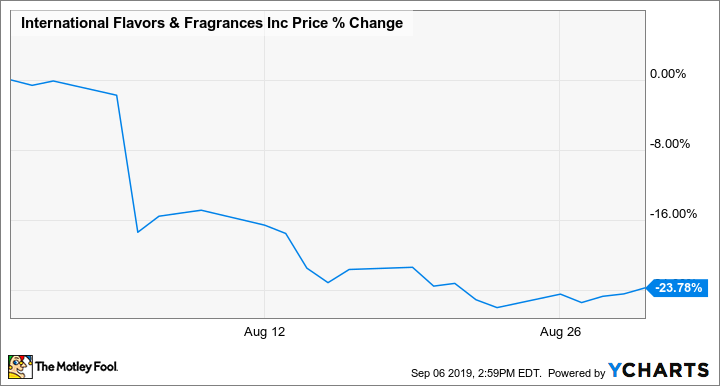 Second-quarter revenue rose roughly 40% year over year to hit $1.29 billion (including the contribution from the company's acquisition of the Israel-based Frutarom), which fell just short of the average analyst revenue target of $1.3 billion. Accounting for the combination of the businesses and adjusting to a constant-currency basis, sales rose roughly 1% compared to the prior-year period. Non-GAAP (adjusted) earnings per share fell 21.7% year over year to come in at $1.30, missing the average analyst estimate's target for per-share earnings of $1.61. 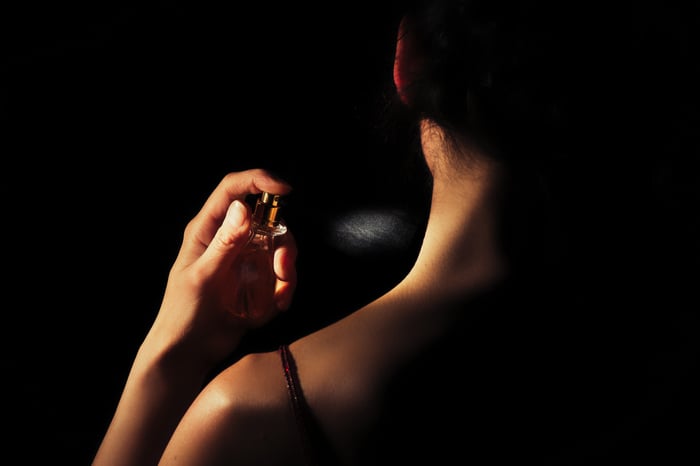 The company's scent segment managed to increase adjusted sales roughly 4% and profits by roughly 19%. However, an adjusted sales decline of 1% and rising cost of goods translated to a 6% decline for the profitability of the company's taste segment.

In addition to the bottom-line miss, the company also made downward revisions to its full-year sales and earnings outlook. Management now expects sales to come in between $5.15 billion and $5.25 billion, down from the original guidance for annual revenue between $5.2 billion and $5.3 billion. Adjusted earnings per share are now expected to be between $4.95 and $5.05, down from the original target range of between $4.90 and $5.10.

International Flavors & Fragrances stock has regained some ground in September, with shares trading up roughly 12.9% in the month so far. Shares have advanced following a presentation from the company at the Barclays Global Consumer Staples Conference on Sept. 5. 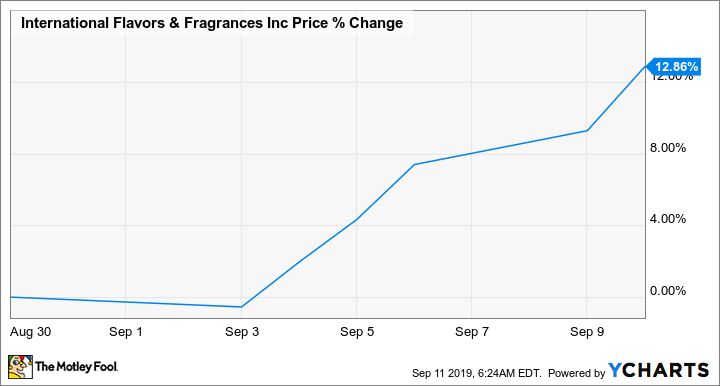 The company's chairman and chief executive officer Andreas Fibig and executive vice president and chief financial officer Richard O'Leary participated in a presentation at the Barclays event and used the occasion to highlight progress on the integration of Frutarom -- which it acquired in a $7.1 billion deal that closed last October. Sales growth for Frutarom recently dropped to 4%, but management reaffirmed expectations for mid-single-digit growth over the long term and expects performance to be closer to that range in the second half of this year and in next year.

Shares trade at roughly 20 times this year's expected earnings and have a dividend yield of approximately 2.4%.