Information Technology (I.T.) experts are seeing a shift in focus to enterprise hardware and services, away from the consumer orientation of smartphones and tablets. This will benefit International Business Machines Corporation, which is reinventing itself once again with acquisitions like Red Hat, and Hewlett Packard Enterprises, which was spun off in 2015 from Hewlett-Packard.

But a purer play in enterprise hardware is Seagate Technology (NASDAQ:STX), as companies collect massive amounts of data that will need Seagate's hard disk drives for storage. 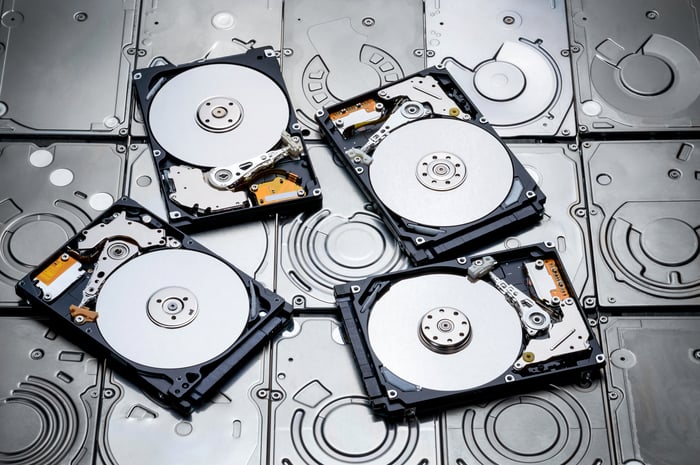 The technique uses a laser diode to heat a tiny spot on the disc to 450 degrees Centigrade to flip the magnetic polarity of each bit and allow data to be written. The technology vastly increases the capacity from the preceding perpendicular magnetic recording (PMR) technology, itself an improvement on traditional longitudinal recording.

The HAMR technology positions Seagate to pull ahead in its rivalry with Western Digital (NASDAQ:WDC), which favors solid state drive (SSD) technology, as enterprises enter the "data era" and need to store and manage massive amounts of data. Neither flash memory nor cloud storage can begin to handle all this data so that even hybrid solutions will need local storage capacity -- including Seagate's HDD technology.

Seagate is one of those "left for dead" tech hardware stocks that is now poised to come back to life. It has struggled to keep up with Western Digital, which has kept the lead in SSD and now is rolling out its own new HDD technology.

But Western Digital ran into a speed bump with its flash memory technology as prices collapsed over the past year. Recovery in that market isn't expected until 2022, when demand should catch up with supply.

This turns Seagate into the tortoise, now pulling ahead of the hare. The company, officially based in Dublin but operating out of Cupertino, California, is proceeding at a more conservative pace. It has steadily increased its dividend and bought back shares to boost the stock price while developing its new technology.

Seagate is betting on enterprise demand as the collection and use of data skyrockets. An IDC report prepared for the company forecast the global datasphere will grow from 33 zettabytes in 2018 to 175 zettabytes by 2025.

Enterprises are less interested in technical details of how a disk works and more interested in capacity, cost, and speed. Hard disks have traditionally been cheaper, while solid state has been faster and smaller, though more expensive on a storage-per-dollar basis. The higher-capacity HDDs will maintain enterprise interest, not only in the cloud market, but in near-line storage as companies move to hybrid solutions using both methods.

Growth on the way

The current year, impacted by the roller coaster of trade negotiations between the U.S. and China, is not the best gauge for Seagate performance. The company is ramping up its 16 terabyte HAMR disk this year and will introduce the 20 terabyte disk next year.

Seagate stock is currently up more than 20% since it reported fiscal fourth-quarter earnings in early August, but it still looks to be undervalued with a forward price-to-earnings (P/E) multiple of 10.8.  The gain has shifted analysts' recommendations, however, with several moving to hold from buy or strong buy, while the first sell recommendations have appeared. The consensus target price of $46.64 is well below the current $54, hovering at the 52-week high.

Investing in this tech stock is a bet on the explosive growth of data. It's also a bet on Seagate's ability to deploy its HAMR technology and adapt HDD to the challenges of artificial intelligence, big data analysis, and the Internet of Things. I think that these appear to be pretty good bets.