With the unveiling of Apple's (NASDAQ:AAPL) new Apple Card in August, war-on-cash investors would be remiss not to ponder what this venture means for some of the companies operating in this space. After all, Apple has a long history of disrupting industries -- and its new credit card is set to integrate into one of the strongest, cult-like consumer ecosystems in the world.

For instance, will Apple's venture into the credit card business potentially have enough of an impact to create concern for a company like Visa (NYSE:V)? 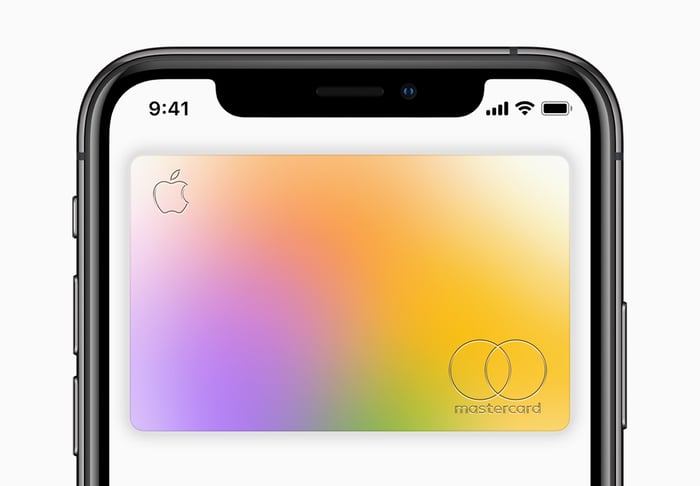 What makes the Apple Card special?

The Apple Card is a lot like any other rewards-based credit card out there in terms of its basic functionality. It uniquely offers its customers 3% cash back for transactions made directly with Apple -- purchasing MacBooks, shopping on iTunes, buying iPhone app, subscribing to Apple Music, etc. It offers 2% cash back for purchases made with Apple Pay through the iPhone (as long as Apple Pay is paying with the Apple Card). And it offers 1% cash back on all other transactions. The card finds its home in the iPhone's Wallet app -- a space tied to over 900 million active devices.

Since Apple isn't a bank, it has partnered with Goldman Sachs (NYSE:GS) to issue the card and Mastercard (NYSE:MA) to process the transactions. Among the more unique features is that the card touts no annual, late, or over-the-limit fees. If a user winds up missing a payment, the account just continues accruing interest at the regular rate.

The application process is quick, efficient, and can be done entirely through your iPhone. The expense-tracking features are easy to understand and users can make purchases with the card within a matter of minutes of getting approved. It's the type of classic, piece-of-cake user experience that consumers have come to expect from Apple.

The motivations here are pretty clear: Apple is pushing the digital aspect of its card in order to encourage customers to use Apple Pay, which in turn will encourage more retailers to offer the service. It's an area Apple clearly wants to revolutionize. As iPhone sales dwindle, Apple has become increasingly reliant on revenue from services to drive new growth. Increasing the adoption of Apple Pay will help to bolster this segment, and give people another reason to use, upgrade, and buy new iPhones.

Should Visa be worried?

Visa and Mastercard make their money by facilitating the millions of daily transactions from credit cards issued by hundreds of banks and financial institutions. These transactions fuel their growth. More partnerships lead to more transactions, so it's always good to create new ones. Which bank issued the card, or the name it's exclusively associated with, can help make such a partnership more lucrative.

It's also important to note that sign-up incentives are a great way to get users into the system. Apple and Goldman Sachs dropped the ball in this department. Some of the most popular credit cards offer sign-up bonuses like 50,000 airline miles, or hundreds of dollars in annual travel credits, or a $150 statement credit. Apple doesn't offer a sign-up incentive (though it could in the future).

But it's good to remember that, although Mastercard beat Visa to the punch in this scenario, Apple Pay and the Apple Wallet allow for multiple credit cards to be loaded in, including those where Visa is handling the transactions. Just because there is now an Apple Card in the iPhone Wallet app doesn't mean that Visa will not still be handling plenty of transactions through Apple Pay. iPhone users buy plenty of non-Apple products and get points or cash-back rewards from plenty of other Visa-backed credit cards that are just as important to them.

Visa could learn a thing or two from Apple's digitally focused venture into the credit card business. Focusing on own credit cards that prioritize ease of setup and use and offer quick approval would be a good place to start. In fact, this might give Visa some food for thought. Perhaps a partnership involving Android phones managed by Alphabet's Google is worth investigating.