Please ensure Javascript is enabled for purposes of website accessibility
Log In Help Join The Motley Fool
Free Article Join Over 1 Million Premium Members And Get More In-Depth Stock Guidance and Research
By Chris Neiger – Aug 21, 2019 at 11:05AM

Here are the details about Apple's newest services play.

It's been several months since Apple (AAPL 3.08%) first announced that it would offer its first-ever credit card to consumers -- and the wait is finally over. This week, Apple officially launched the Apple Card, which it hopes will be a new way to engage its customers and offer them an entirely new Apple service.

But what exactly does the Apple Card offer to its users, and how will Apple benefit? Here are five things you should know about the company's move into the credit card business. 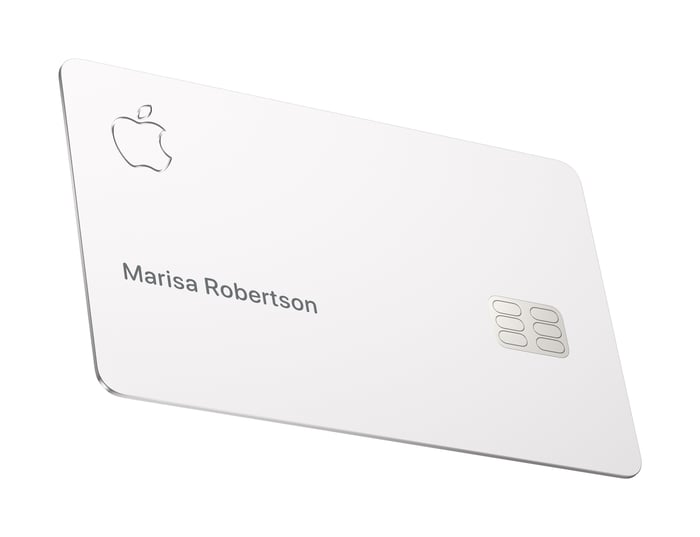 1. It's an Apple Card, but Goldman Sachs is the issuer

While Apple came up with the idea of the Card and the details of what it offers, the company needed to have a bank officially issue it, which is where Goldman Sachs (GS) comes in. Goldman Sachs is new to the consumer lending market as of 2016, and Mastercard is the global payment network the Apple Card will work through.

What does this mean for cardholders? Despite being issued by Goldman Sachs, Apple still has a lot of control over the Card. For example, Apple wanted the Card to have some of the lowest interest rates among rewards credit cards, and it does, according to The Balance.

2. There aren't any fees

The Apple Card doesn't charge any annual fee, no late fees, and no over-the-limit fee. Apple says on its website, "If you miss a payment, we won't charge you a late fee or apply a new high-interest penalty rate." Instead, users will just continue to accrue interest on their balances at the regular interest rate.

In addition to no fees, Apple Card offers unlimited cash back on purchases. Card users will get 3% cash back on everything they buy from Apple, including at the Apple Store, App Store, iTunes, and the company's website. The card also pays 2% on every purchase using Apple Pay, and 1% for purchases made without using Apple Pay.

What's different about Apple's cash-back program, which it calls Daily Cash, is that cardholders receive their cash back every day, instead of on a monthly basis. Daily Cash is stored on the Apple Cash Card in the iPhone's Wallet app, which can then be used for other purchases or applied to the Apple Card balance.

4. The card is managed entirely through the iPhone

With iPhone sales on the decline, the company is looking to new services, including Apple TV+, Apple Arcade, Apple News+, and the Apple Card to start making money in new ways. Whether or not the company's new Card will ultimately do that is still unknown.

Apple Card is an extension of Apple Pay, which the company earns money from every time a user makes a transaction (Apple charges a small fee to the bank that issued the card used for each Apple pay transaction). If the Apple Card helps boost Apple Pay transactions, which have already reached 1 billion transactions per month, then the Card will be a win for the company. But don't expect it to be a huge moneymaker for the tech company right away, especially compared to the slew of other services Apple is on the cusp of launching.