Shares of DXC Technology (NYSE:DXC) crashed as much as 17.5% on Thursday, following news of the IT services specialist ushering in a new CEO. By 2 p.m. EDT, the stock had recovered to a milder -- but still drastic -- 12.4% drop. 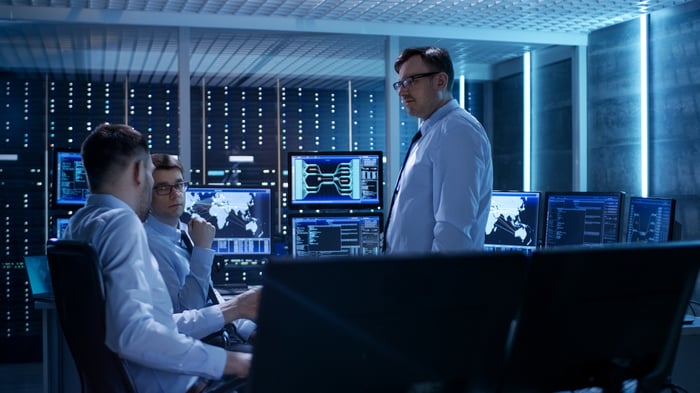 Mike Lawrie had served as DXC's CEO since the company was formed in 2017, merging Computer Sciences Corp. with the enterprise services arm of Hewlett Packard Enterprise (NYSE:HPE). Lawrie came in as the CEO of Computer Sciences, having held that title since 2012. His retirement from the CEO and president posts is immediate, followed by his leaving as chairman of the board at the end of 2019.

Mike Salvino is taking the reins, having spent roughly four months on the company's board. He comes with three decades of industry experience; the board had been looking for Lawrie's successor for a full year.

A couple of analyst firms downgraded DXC's stock on the news. Analyst Rayna Kumar from Evercore ISI noted that Mike Lawrie was a significant factor when Evercore recommended the technology stock. Kumar also respects Mike Salvino, but eyes the change of control with suspicion.

"Things could get worse before getting better," Kumar argued, slashing his price target on DXC from $63 to $34 per share.

That's a mighty sharp cut for a simple CEO hand-off.

I agree that the company is going through a rough patch at the moment and investors are licking the wounds of a 59% drop in 52 weeks. Still, a change of pace might be just what the doctor ordered. I find it hard not to like DXC's chances of beating the market, starting from bargain-bin valuation ratios like 4.2 times forward earnings and 13.4 times trailing free cash flows. This big drop looks like an overreaction to mildly negative news.