It's been less than a year since Samsung (OTC: SSNLF) gave electronics enthusiasts their first look at what we now know as the Galaxy Fold. But the incredible mobile device had already been years in the making, and -- given its ability to unfold into a larger tablet form factor thanks to its internal flexible OLED display -- boasted the potential to disrupt smartphone form factors as we know them.

Of course, we know now that Samsung couldn't fulfill that ambitious promise. But its engineers did finally fix the Galaxy's Fold's initial issues earlier this month, leaving the company comfortable enough to launch the device in Korea last week. Starting next week, the Galaxy Fold should hit stores in Germany, the UK, and Singapore, followed by the U.S. "in the coming weeks." 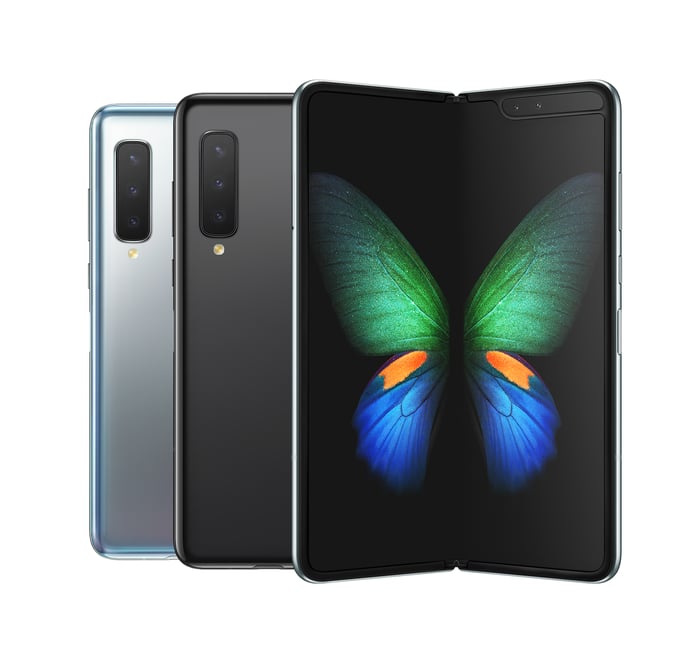 The Galaxy's Fold's technical specifications remain the same, most notably including its rear triple camera, 12 GB of RAM, 512 GB of internal storage, and Snapdragon 955 processor. And it'll still command a premium price starting at nearly $2,000 when it arrives in the United States.

Samsung did make some minor tweaks to the Android version Fold will run, however, namely to allow the navigation bar to be aligned to one side or the center to better play to the strengths of the larger internal screen.

So what exactly did Samsung do to make sure the Galaxy Fold v2 doesn't repeat its predecessor's failures?

In the first version of the Galaxy Fold, for one, some early reviewers damaged the screen by mistakenly peeling a protective film layer off. So Samsung extended the edges of that layer to sit under the bezel of the device for a more seamless, unmistakably permanent look and feel.

Samsung also added small plastic caps near the top and bottom of the Galaxy Fold's hinge -- without taking away from the overall aesthetic appearance, of course -- thereby closing what used to be a small gap that allowed dust and debris to enter.

Relatedly, because the screen can't fold with a clean corner like a piece of paper (it still has a slight curve when closed), Samsung's teams took the opportunity to narrow the small gap near the hinge. And when the Fold is opened, additional layers of metal behind the display make it feel sturdier and give it a less prominent crease down the center.

Too little too late?

There's one other thing that's changed since Samsung first unveiled the Galaxy Fold last year: This time it's launching quietly, with little fanfare from its creators.

Samsung hasn't shared exactly how many new Galaxy Folds it plans to ship for the initial launch. But now that much of the buzz surrounding it has undoubtedly faded on the heels of the first failure, it seems the number could be significantly lower than the 1 million units management was targeting the first time around.

Perhaps that's for the best. After all, we can be sure Samsung will only continue to improve the Galaxy Fold (and lower its cost) with future iterations. And at this stage Samsung should arguably be most interested in simply getting Galaxy Fold in as many users' hands as possible in order to eventually convince the masses that we can't live without foldable OLED displays. If that happens, it could perfectly position the company to benefit from a revival in mobile-device demand.