Please ensure Javascript is enabled for purposes of website accessibility
Log In Help Join The Motley Fool
Free Article Join Over 1 Million Premium Members And Get More In-Depth Stock Guidance and Research
By Reuben Gregg Brewer – Sep 14, 2019 at 10:02AM

Healthcare REIT HCP is up big so far in 2019, but if you look further back it's still a laggard. Does that make it a buy?

The aging of the baby boom generation is the long-term demographic story that's backstopped diversified healthcare real estate investment trusts (REIT) like HCP (PEAK 3.67%) for years. According to competitor Ventas (VTR 1.09%), a key market is getting close to turning from oversupplied to undersupplied, which will push up demand for one of HCP's key divisions. Is that enough to make it a buy for dividend focused investors, or is there more going on here?

HCP's stock is up around 26% this year, right in line with Ventas and a touch lower than the 29% advance by Welltower (WELL 1.65%), the third big player in the diversified healthcare REIT space. In other words, HCP is running right alongside its closest peers. However, look a little further and the numbers start to diverge. 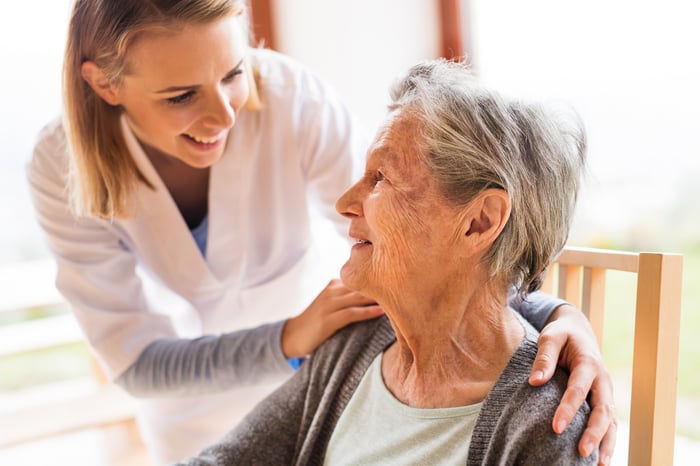 If you look at the trailing three year period, HCP is up just 1% or so, compared to 7% and 22% for Ventas and Welltower, respectively. Go back five years and HCP is down 10% compared to gains of 30% and 34%, respectively. That makes it seem like HCP could easily have some more ground to make up.

And now add in the deep-dive market outlook provided by Ventas in the senior housing space. Essentially, this sector, which represents roughly 30% of HCP's net operating income, has struggled because of heavy building in anticipation of increasing demand that has yet to materialize. Between 2019 and 2021 that dynamic should shift, driven by a drop off in construction and increasing demand. HCP, meanwhile, is expected to see the largest increase in demand growth in its portfolio of operated facilities, according to peer Ventas. These are the properties that will have the biggest impact on its future performance, because the company basically gets a piece of the upside.

Laggard longer-term performance coupled with a positive outlook for a key segment of the business paints an attractive picture at HCP. But don't jump just yet.

HCP's weak relative showing over the past five years goes back to a big misstep. The REIT was late to act on weakening fundamentals in the nursing home space. Ventas jettisoned nursing assets before the sector became an issue, while HCP was forced to spin its nursing homes off after they had started to decline. That led to a reduction of the dividend, which was supposed to be made up by the dividend from the company that was spun off. Only that company struggled from the get-go, and ended up buying its largest tenant (effectively losing its REIT status) and eliminating its dividend. It was eventually acquired by Welltower. 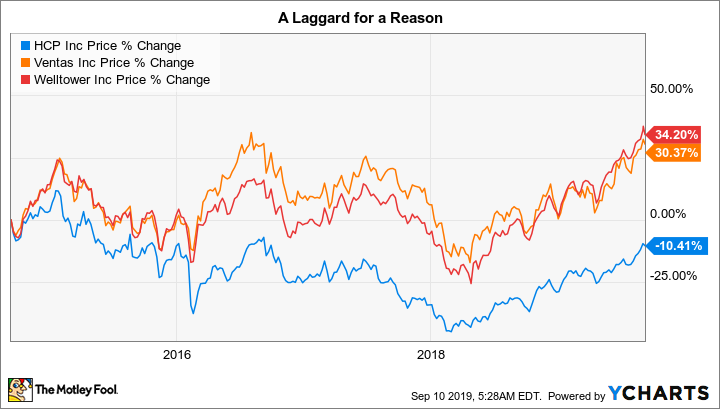 So HCP's dividend was basically cut. And the dividend hasn't been increased since the 35% reduction roughly three years ago. That story isn't exactly one that would make an REIT investor happy, since they are generally looking for reliable dividends that will grow slowly over time. With the dividend notably lower and stuck in neutral, there's probably little room for HCP to make up the ground its lost to its peers.

That doesn't mean that HCP is a bad healthcare REIT or has no future. In fact, it has been adjusting its portfolio to take advantage of current market trends. That's included increasing its exposure to medical office space and research facilities. These two categories make up nearly 60% of the company's net operating income, and they continue to perform well, with net operating income growing 6.5% in the research space and 4.2% in the medical office space through the first half of 2019. The senior housing segment saw growth of just 0.5%. If that segment starts to perform better, as Ventas suggests it eventually will, HCP will be hitting on all cylinders. But that's not materially different from the story at Ventas or Welltower, neither of which suffered the nursing home misstep that led to a dividend cut at HCP.

Not bad, but not the best

At the end of the day, HCP is an OK healthcare REIT, but its history suggests that investors might be better off looking at peers Ventas and Welltower. And Ventas has a slightly higher dividend yield today, backed by regular increases over the last nine years. With nothing to really make it stand out, and a notable allocation mistake in its recent past, investors should probably wait until dividend growth resumes before giving HCP the nod over its closest peers. That said, the yields offered by all three are at the low end of their historical ranges, suggesting rich valuations -- so now may not be the best time to jump aboard any of these diversified healthcare giants.