Please ensure Javascript is enabled for purposes of website accessibility
Log In Help Join The Motley Fool
Free Article Join Over 1 Million Premium Members And Get More In-Depth Stock Guidance and Research
By Billy Duberstein – Sep 14, 2019 at 8:00AM

The yield may not be much, but the moat and the growth make up for it.

Many retirees today face a conundrum. The yield on 10-year Treasury bonds has fallen to just 1.7% as of this writing. That's not very much, and yet it's still way higher than bonds in Japan or countries in Europe.

Meanwhile, investors have piled into seemingly "safe" dividend stocks like consumer staples and utilities, pushing their prices up to the point where their safety becomes suspect. And while cyclical and value stocks appear quite cheap, they can be volatile, with earnings that may get cut down in a recession.

So if you're a retiree looking for safety, dividends, and growth, where can you turn? 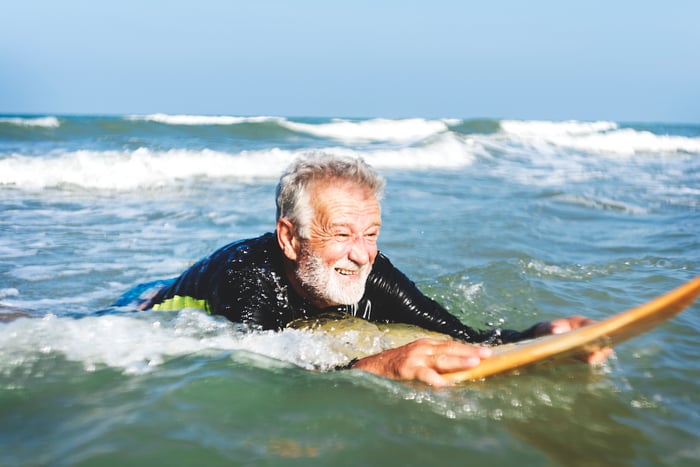 At first, you might not think of Microsoft as an ideal retiree stock. After all, the stock is in the technology space, which is often thought of as a volatile sector prone to cycles. In addition, its dividend yield stands at just over 1.3%. That's actually a bit lower than the 10-year Treasury note.

But if you're in retirement, you don't want solid investment returns for just one year, but rather five, 10, or 20 years (or even longer), and with the least amount of worry. Yet many retirees make the mistake of looking just at today's yield and valuations, piling into high-yielding securities with lower growth prospects or -- worse -- increased risks.

With the company growing earnings per share over 20% last quarter, and with its dividend payout ratio still at just 35%, the dividend has lots of room to grow over the next decade. That's compared with the current yields on bonds, which aren't going to grow at all.

If you're a retiree and feel like you need a payout beyond the 1.3% yield on Microsoft, another option would be to sell a certain percentage of your stock holdings every quarter or year. As such, you would pay capital gains taxes, which may (or may not, depending on your bracket) be beneficial from a tax perspective.

Of course, for that strategy to work, one needs to be relatively confident in Microsoft's safety and growth prospects to boost its stock price in the coming years. Fortunately, those characteristics both seem robust.

A competitive moat and balance sheet are key

Quickly on Microsoft's balance sheet: It's pretty awesome. The company is absolutely swimming in net cash, to the tune of almost $62 billion. That's more than many large-capitalization companies are worth, and that huge cash pile provides ballast against potential downturns.

In terms of competitive advantages, they are formidable. Even better, Microsoft has not one, but several businesses that all benefit from solid economic moats.

For instance, its Office software suite is a standard upon which business gets done around the world, and is in fact the word processing or spreadsheet software that most learn early on in school. In addition, Microsoft's LinkedIn social network is the standard professional social network. Both of these businesses benefit from powerful network effects by way of their leading, first-mover positions.

In addition, its enterprise software and infrastructure platforms benefit from high switching costs that make them difficult to displace once adopted. These include Microsoft's Dynamics and Commercial Office products, as well as its Azure infrastructure-as-a-service platform. These products serve businesses large and small all over the world, and once a large business adopts a solution, it's a huge pain to switch vendors, move data, and retrain all of your teams.

The enterprise software-as-a-service space should also be fairly resilient in an economic downturn, as opposed to stocks that may have leading brands but operate in more cyclical industries.

Finally, just because you are in retirement doesn't mean you should ignore a company's growth prospects. Not only does overall growth allow for rising dividends, buybacks, and share prices, but a lack of growth, or even an earnings decline, could cause a large sell-off in your stocks, imperiling the principal you've invested.

As you can see, Microsoft is still growing impressively for a company of its size:

There are plenty of reasons to think the impressive revenue and profit growth can continue. Its Azure infrastructure platform, which is part of the intelligent cloud segment, is a strong second in the cloud space, and enterprise customers are just starting to look at their full range of options to outsource their storage and computing capabilities to cloud vendors. Azure is still a relatively small part of Microsoft, but it also grew an impressive 64% last quarter (68% in constant currency), implying a long runway ahead.

In addition, the above results incorporate negative 10% growth from Microsoft's gaming division, part of the "more personal computing" segment. The Xbox cycle is in its late stages, but there's reason to think that the company's next gaming console, currently code-named "Scarlett," will drop in 2020. That could rejuvenate Microsoft's gaming revenue, which would be a cherry on top of the company's already-strong enterprise franchises.

While some have dismissed technology as a risky sector, the fact is that large, competitively advantaged tech platforms such as Microsoft's are really the blue chips of today. In fact, if a company isn't involved in technology, it runs the risk of being disrupted. While many think of no-growth consumer staples and utilities stocks as "safe," and have bid their stocks up to mid-20s P/E ratios, Microsoft -- even with its 20% profit growth, huge cash pile, and leading technology -- also trades at a forward P/E ratio of just 23.

To me, its business is not only just as safe as any branded consumer product, but it also has superior growth, bigger competitive advantages, and a better balance sheet. That's why it's an ideal stock for retirees today.