Please ensure Javascript is enabled for purposes of website accessibility
Log In Help Join The Motley Fool
Free Article Join Over 1 Million Premium Members And Get More In-Depth Stock Guidance and Research
By Danny Vena - Sep 16, 2019 at 11:05AM

The company is chasing a lucrative opportunity with its focus on healthcare.

In conjunction with its product release this week, Apple (AAPL 1.30%) announced that it is launching a groundbreaking new research app for the Apple Watch that will allow U.S. users to participate in health studies. They will be able to volunteer to provide health-related data collected by both the Watch and the Apple Health app.

The tech giant isn't wasting any time, either, announcing that it will participate in three new health studies focused on hearing, the heart and movement, and women's health.

It continues to move headlong into healthcare -- an area that could spell big opportunities. 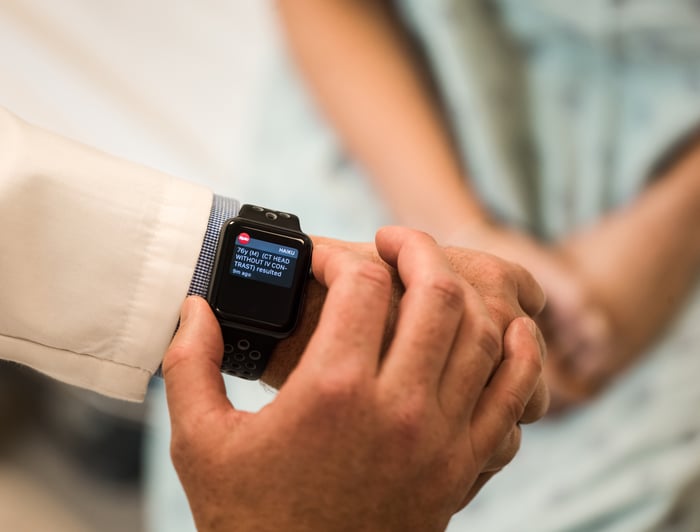 Three of a kind

The company is collaborating on studies looking at three health issues:

In late 2017, the company collaborated with Stanford Medicine, enrolling Apple Watch users in a clinical trial to test the effectiveness of the device at detecting atrial fibrillation (also known as AFib). This condition is the most common form of irregular heartbeat, and can lead to strokes, blood clots, and heart attacks.

The response was unprecedented, with 419,093 Watch users in 50 states participating in the study. The Apple Heart Study, which was completed earlier this year, concluded that "wearable technology can safely identify heart rate irregularities that subsequent testing confirmed to be atrial fibrillation, a leading cause of stroke and hospitalization in the United States." 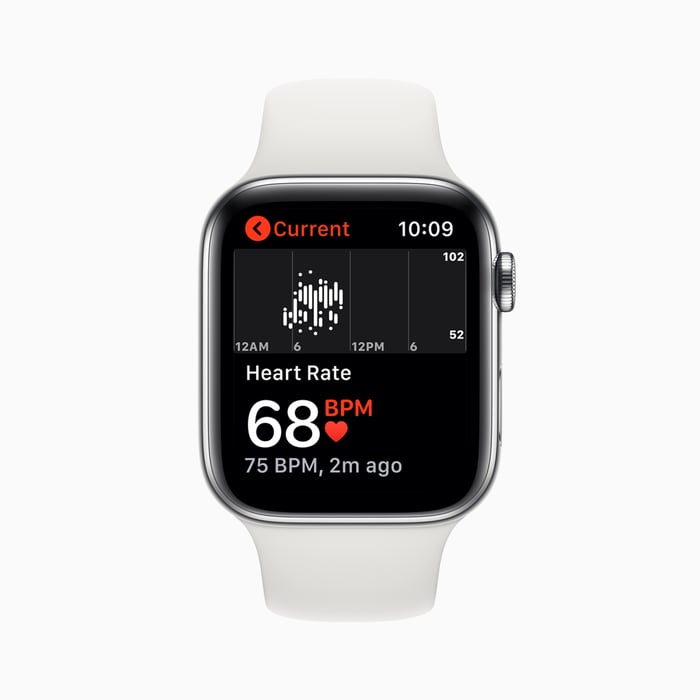 Earlier this year, Apple struck a deal with the Department of Veterans Affairs (VA) to make its Health Records feature available to veterans using the iPhone. Apple was also one of nine companies selected by the Food and Drug Administration for a pilot program to improve the approval process for software-based medical apps.

It's no secret that Apple has become increasingly interested in the health field. In an interview earlier this year, CEO Tim Cook said, "If you zoom out into the future, and you look back, and you ask the question, "What was Apple's greatest contribution to mankind?" it will be about health."

Toward that end, the company introduced the ResearchKit and CareKit, software frameworks used by developers to create healthcare apps. This move helped the company mount the Apple Watch Heart Study.

Because of the numerous health-related features on the Apple Watch, some insurers have begun subsidizing some or all of the cost of the device as part of their digital wellness programs. Apple has also been in talks with a number of private Medicare Advantage plans about similar subsidies. The aging population represents a massive opportunity, as more than 19 million seniors participate in these plans, opening up a whole new demographic for the Apple Watch.

It shouldn't be a surprise to investors that Apple has a vested interest in the healthcare field. A report by Morgan Stanley earlier this year concluded that Apple could generate revenue of more than $15 billion by 2021, and it could climb as high as $313 billion by 2027. However, the midpoint of Morgan Stanley's estimated range for Apple's revenue potential by 2027 from health-related products and other health initiatives is about $90 billion -- still an impressive figure.

With that much at stake, expect Apple to continue making further moves into healthcare.