Drone strikes over the weekend knocked half of the country’s capacity offline.

Drone attacks on Saudi Arabia's oil infrastructure over the weekend shook the oil market to its core. The hit caused the leading oil producer to take half of its production offline. At more than 5 million barrels per day, that equated to 5% of global supplies disappearing from the market. It's the largest disruption ever to hit the oil market.

Oil prices responded in kind. The U.S. oil benchmark, WTI, skyrocketed more than 15%, rising above $60 a barrel. That marked its largest one-day move in more than a decade. Meanwhile, the global benchmark price, Brent, was up as much as 19.5% at one point, which was its biggest gain on record. That spike caused shares of oil producers to go ballistic. 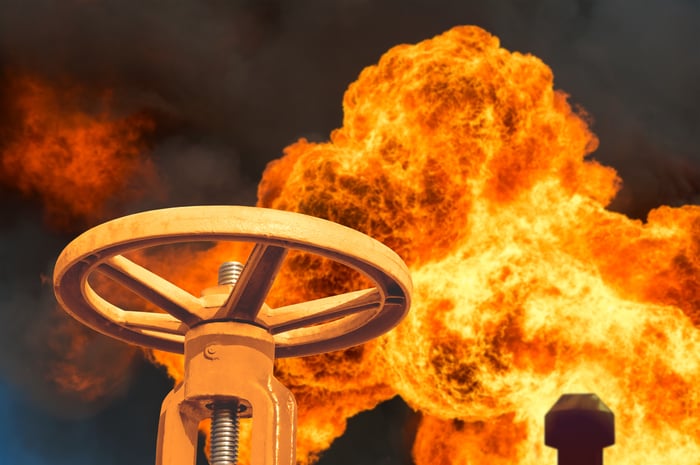 The shot heard around the world

It's not yet clear how soon that production will be back online. The country had hoped to have a third of it restarted by Monday, though it said it could be weeks before it's at full capacity.

Aside from that uncertain timeline, it's not known who was behind the attack. While Yemeni rebels initially claimed responsibility, Saudi Arabia is pointing the finger at Iran. If that's the case, it could engulf the entire region in war.

What the attack means for oil prices

The market hates uncertainty. That's why crude prices spiked in the wake of the attack. They could have even further to run.

Analysts envision two potential scenarios. Best case, Saudi Arabia quickly repairs the damaged facility and gets back to full capacity in a few weeks. If that happens, crude prices probably won't move much higher, though crude also probably won't give back too much of its recent gains because of concerns of another attack. In the view of many analysts, there will now be a $5- to $10-per-barrel risk premium added to the price of oil. As such, crude would probably trade in the $55- to $65-per-barrel range in the coming months, as opposed to its $50 to $60 range much of the year.

A worst-case scenario, on the other hand, would be that tensions boil over and Saudi Arabia retaliates by attacking Iran. That could cause Iran to shut down the Strait of Hormuz in the Persian Gulf, which could choke off as much as 20% of global supplies. Such an event could cause crude prices to quickly soar past $100 a barrel, which has the potential to cause a devastating blow to an already weakening global economy. 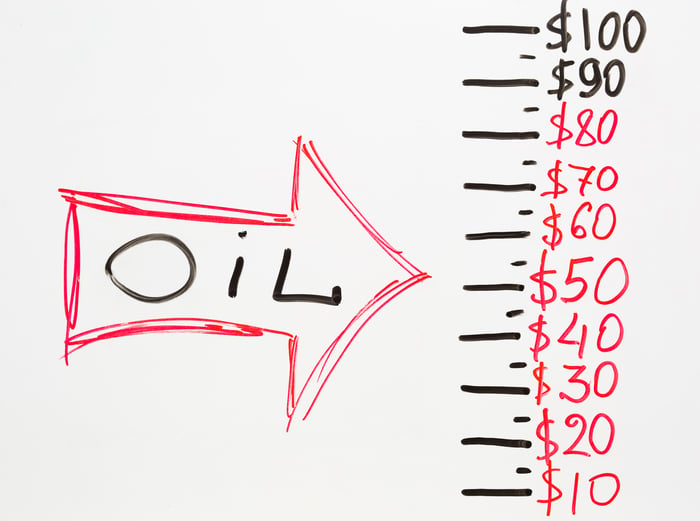 What the attack means for oil companies

Before the attack, the oil market's biggest concern was that it had too much oil because of surging U.S. production. Because of that, oil-producing countries like Saudi Arabia as well as many oil companies were holding back some supply. At the moment, however, no one is in any rush to boost output. OPEC, for example, said it had no immediate plans to increase global oil supplies.

Likewise, most U.S. oil producers will likely stick to their current spending plans for now even though crude prices are spiking. Instead of spending more money to drill additional wells, they'll cash in on higher crude prices. That will enable many to buy back even more of their shares.

U.S. oil producers ConocoPhillips (COP -0.83%), Pioneer Natural Resources (PXD -1.10%), and Concho Resources (CXO) have been ramping up their share repurchase activities this year. ConocoPhillips, for example, initially planned to buy back $3 billion of its stock this year, but it recently boosted that program by $500 million thanks to its stronger free cash flow as a result of higher oil prices. Pioneer Natural Resources, meanwhile, increased its buyback from $100 million up to $2 billion. The company has been aggressively buying back its shares, which had slumped even though oil prices are higher this year. Concho Resources also just launched a $2 billion buyback program, which it jump-started by selling some assets.

As long as crude prices remain in the $55- to $65-per-barrel range, oil producers will probably pour their increasing free cash flow into buying back more shares. However, if crude prices rise above that level because of an escalating conflict in the Middle East, then they might consider increasing their drilling activity levels.

The strike on the heart of Saudi Arabia's oil infrastructure caused the biggest disruption to global oil supplies that the market has ever experienced. That fueled one of the fiercest oil price rallies in history.

What's not clear is how long the disruption will last nor how Saudi Arabia will respond. If it's simply a short-term outage, then crude prices will probably quickly settle into their new range. However, if tensions escalate, then crude oil -- and oil stock prices -- could have much further to run. That's why investors should keep a close eye on the oil market in the coming days and look for clues on how much upside could be ahead for energy stocks.