Please ensure Javascript is enabled for purposes of website accessibility
Log In Help Join The Motley Fool
Free Article Join Over 1 Million Premium Members And Get More In-Depth Stock Guidance and Research
By Matthew DiLallo - Sep 16, 2019 at 11:23AM

Drone attacks struck a blow to the heart of Saudi Arabia's oil infrastructure over the weekend. The damaging hit to the world's largest oil processing facility and a major oil field caused the country to temporarily shut down half of its daily crude oil production. It's the largest disruption to ever hit the oil market at more than 5% of the total global supply.

The incident is causing crude oil prices to soar, with the U.S. oil benchmark rocketing $5 a barrel -- or nearly 10% -- by 9:45 a.m. EDT on Monday, pushing it above $60 a barrel. That surge in oil prices is fueling a massive rally across the energy market. Several U.S. oil stocks are soaring today. Among the notable names making big moves are Chesapeake Energy (CHKA.Q), Devon Energy (DVN -3.67%), Marathon Oil (MRO -5.61%), WPX Energy (WPX), and Whiting Petroleum (WLL). 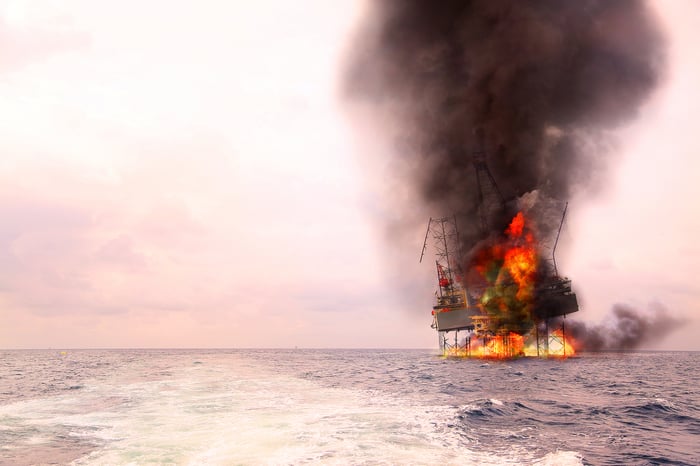 The attack on Saudi Arabia's oil infrastructure sent shock waves throughout the global oil market. Not only did it show the country's vulnerability, but it also added a high degree of uncertainty, since how long this production center will be offline is unclear. Saudi officials stated that they expect to bring one-third of it back by Monday. However, it could take weeks before it's at full capacity. That uncertain timeline and the potential for additional attacks are sending oil prices soaring.

Among the biggest beneficiaries of the higher oil prices are U.S. oil producers. That's because this dip in production will have a direct impact on their cash flow. The longer oil prices remain elevated due to the outage, the more money these companies will make.

Marathon Oil, for example, can generate $750 million in free cash flow if oil averages $50 a barrel through the end of next year. However, if crude prices average $60 a barrel over that time frame -- which is a possibility due to the strike against Saudi's oil infrastructure -- it can produce $2.2 billion in free cash. With its strong balance sheet, Marathon can return all that money to its shareholders via its share repurchase plan. That's why its stock surged as much as 11.8% on Monday morning.

Devon Energy and WPX Energy were also up more than 10% on Monday morning due to the spike in oil prices. Like Marathon, both companies will produce more free cash flow if prices remain higher. That would give them additional funds to return to their investors via a buyback program.

Meanwhile, financially weaker oil producers like Whiting Petroleum and Chesapeake Energy are making even bigger moves today. That's because higher prices will give them more cash to chip away at their debt, which would help relieve some of the pressure on their balance sheets. Whiting led the way, rocketing 48% at one point in early-morning trading, while Chesapeake's stock spiked nearly 17%.

The attack on Saudi Arabia's oil infrastructure caught the oil market by surprise. It has shifted the focus from worrying about there being too much supply given weakening demand growth to the possibility that there might not be enough. Those fears aren't likely to fade even if the country quickly brings its output back online, since the attack showed its vulnerability. In light of that, oil prices could have further to run, especially if it takes a while to fix the damage to the Saudi facilities.