Please ensure Javascript is enabled for purposes of website accessibility
Log In Help Join The Motley Fool
Free Article Join Over 1 Million Premium Members And Get More In-Depth Stock Guidance and Research
By Keith Speights – Sep 17, 2019 at 6:00AM

Hundreds of mysterious cases of vaping-related illnesses are causing some to advocate that legalizing pot is more important now than ever.

If you've kept up with the national news lately, you're no doubt aware of significant health issues that have been linked to vaping. The Centers for Disease Control and Prevention (CDC) and the U.S. Food and Drug Administration (FDA), along with state and local health departments, are looking into at least 380 cases across 36 states and one U.S. territory where individuals have developed lung disease after using e-cigarettes.

Concerns are so great that the Trump administration is making plans to ban flavored e-cigarettes across the U.S. This move is primarily an attempt to limit the use of vaping by young people.

There's also a surprising twist to the saga of the mysterious vaping health scare: Some think it could boost the chances of legalizing marijuana in the U.S. 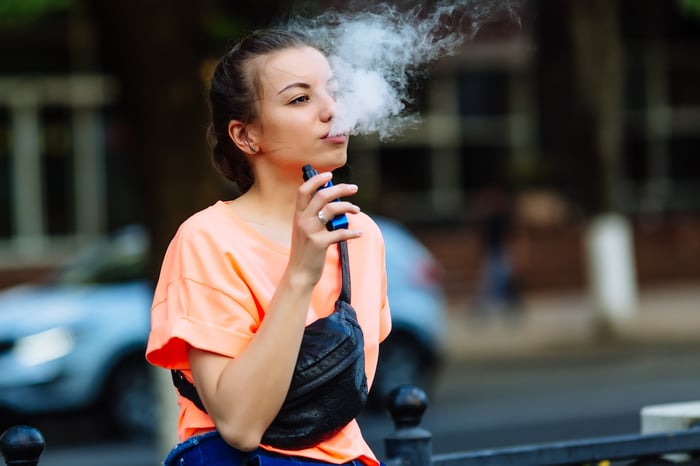 The CDC, FDA, and other agencies are continuing to investigate the vaping illness cases that have occurred. So far, there aren't many details available. The CDC readily admits that it doesn't know at this point the specific cause (or causes) of the illnesses that have been reported.

It's possible that there could be a connection between vaping cannabis and the reported lung illnesses. However, it's important to note that the CDC stated that some of the reported cases involved the use of e-cigarette products that contained only nicotine.

The potential link between cannabis and the vaping health scare in the U.S. is serious enough that it came up in the fiscal 2019 fourth-quarter conference call for Aurora Cannabis (ACB 4.31%), a leading Canadian cannabis producer. Aurora is planning to launch cannabis vaping products later this year when the cannabis derivatives market, commonly referred to as "Cannabis 2.0," launches in Canada.

Aurora Cannabis CEO Terry Booth said that the company doesn't plan to sell flavored e-cigarettes and vapes, the products that the Trump administration wants to pull from the shelves. He expressed his view that the U.S. issues could be related to products sold on the black market.

The appeal of regulation

Booth's comment about a possible link between the vaping health issues and the black market raises an important point that has been taken up by the U.S. cannabis industry. The argument is that if cannabis sold illegally is the culprit behind the vaping-related lung illnesses, it only makes sense to legalize cannabis so that it can be fully regulated.

The Cannabis Trade Federation, a national coalition of cannabis-related businesses, issued a statement that said:

Although investigations and data collection are ongoing, it appears that most, if not all, of the reported cannabis-related cases so far stem from products sourced from the unregulated criminal market. The Cannabis Trade Federation supports strict regulation of the cannabis industry at both the state and federal level. Consumers and communities will benefit when all cannabis products are subject to rigorous production, safety, and testing standards at the federal level. We urge Congress to act now so that the federal government can serve its proper role in regulating cannabis as a consumer product.

There's at least some anecdotal evidence to support the Cannabis Trade Federation's view. Aurora Cannabis Chief Corporate Officer Cam Battley noted in his company's Q4 conference call that "thus far, according to the best information we have today, these illnesses have not popped up in Canada." Cannabis is legal throughout Canada for both medical and adult-use recreational purposes and is regulated by Health Canada.

Could the outbreak of vaping-related illnesses increase the chances of the U.S. changing federal laws to make cannabis legal and allow the FDA to establish regulations? Don't hold your breath.

Remember that there is another alternative: Ban e-cigarette and vaping devices outright. That's exactly what anti-marijuana legalization group Smart Approaches to Marijuana (SAM) is advocating. The organization's president, Dr. Kevin Sabet, who was a senior drug policy advisor in the Obama administration, is calling on the White House "to recognize that THC vaping poses a significant threat to public health and include these dangerous products in their forthcoming recommendations. The sale of THC vaping oils and other products must be halted before more Americans are put at risk."

Critics of banning vaping altogether would no doubt argue that shifting use entirely to the black market would only compound the problem if, as they suspect, the issues stem from unregulated black-market products. Proponents of a total vaping ban would counter that overall use of e-cigarettes and vaping would likely be significantly reduced if the products weren't legally allowed on the market.

For investors interested in marijuana stocks, the current vaping health scare isn't likely to change the dynamics very much. As long as no cases of illness are reported in Canada, the country is likely to move forward with its plans to open the expanded market for cannabis derivatives this year, creating solid growth opportunities for Aurora Cannabis and its peers. And the status quo is likely to hold in the U.S. with cannabis legal in many states but illegal at the federal level.

After all of the talk on both sides of the issue, it could ultimately come down to a lot of smoke and no action.