Please ensure Javascript is enabled for purposes of website accessibility
Log In Help Join The Motley Fool
Free Article Join Over 1 Million Premium Members And Get More In-Depth Stock Guidance and Research
By John Ballard – Updated Sep 17, 2019 at 8:32AM

Diageo (DEO 0.60%) owns some of the most valuable drinking brands in the industry, including Johnnie Walker, Guinness, Smirnoff, Captain Morgan, and Crown Royal. These brands have delivered market-beating gains for investors with Diageo stock nearly tripling the return of the S&P 500 over the last 20 years. However, in the last decade, the stock has performed roughly in line with the broad market.

The stock currently trades for a forward P/E of 23 times analysts' earnings estimates, representing a premium to the average consumer staples stock. Let's look at why Diageo deserves to trade at that premium, and what kind of return investors can expect from here.

Diageo owns six out of the top 10 alcohol brands in the world, according to Brand Finance. For a company logging nearly $16 billion of revenue in the past year, it can be a challenging feat to find growth, especially considering the stable trends of alcohol consumption per capita over the last century across spirits, beer, and wine.

To drive returns for investors, Diageo has relied on acquisitions and innovation. Diageo started in 1997 as a result of the merger between Grand Metropolitan and Guinness. After shedding its food brands in 2000 (including Burger King) to focus on the premium drinks market, Diageo acquired two big names -- Crown Royal and Captain Morgan -- and the company has been an active dealmaker ever since.

In the past five years, Diageo has acquired brands like Don Julio and Casamigos -- two leading tequila plays where the company has seen some of its most promising results. The company has also been able to grow earnings faster than revenue by improving operating efficiency and profit margins. 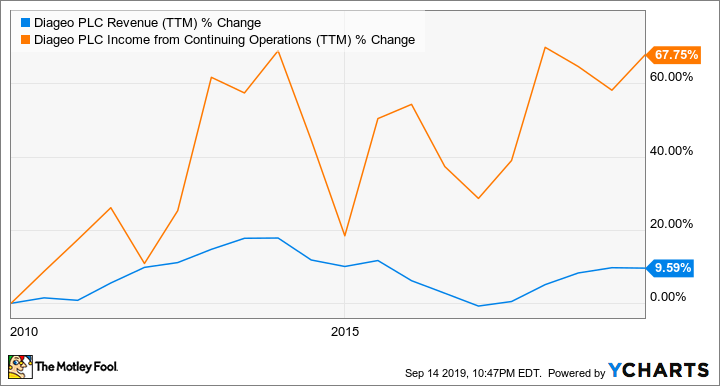 Another opportunity for growth lies in market share gains. The alcohol industry is highly fragmented, which provides an opportunity for a consumer staples giant like Diageo to expand its piece of the pie. Diageo controlled just 25% of global spirits sales volume as of March 2016.

The company is trying to increase its market share by introducing new products, which management refers to as "new-world" brands. The company seeds new brands either through its in-house development program or externally through Distilled Ventures.

The latter effort has created several new innovations, such as Seedlip -- the first nonalcoholic spirit. The importance of new drinks like Seedlip is that it can help Diageo take advantage of shifting consumer tastes. For example, in fiscal 2018, Diageo acquired a Distilled Ventures brand called Belsazar, which positions the company to participate in the growing demand for aperitifs -- a special concoction that has been around for a long time but is starting to see rising popularity with younger consumers.

Diageo is worth a premium

The growth in aperitifs and decline in vodka highlights a risk for Diageo -- that changes in consumption patterns can limit the company's growth potential in any given year.

It's difficult to predict what consumers may like in the distant future, but that's where Diageo's diversification and ability to invest in new brands is such a significant advantage. Even with a 6% decline in industrywide vodka sales last year, which makes up a tenth of Diageo's business, the company still generated 5% growth in organic net sales. Some of that growth was also driven by price increases, which is a testament to the strength of the labels in its global portfolio.

Spirits and other beverages, excluding beer and wine, made up 69% of Diageo's net sales in fiscal 2018, and this exposure should continue to drive steady top-line growth. Although total alcohol consumption has remained stable for many years, spirits have been taking share from beer and wine, and there has also been a strong trend toward premium drinks. Last quarter, Diageo saw double-digit growth in sales of gin and reserve spirits, which management credited toward its innovation and the premiumization trend spreading around the world.

This industry leader should continue to deliver returns for investors, as long as the trend toward spirits and premiumization continues. The company is actively trying to win more consumers over to spirits through increased spending on marketing while at the same time expanding its profitability.

However, I don't expect investor returns to be any better than the last 10 years, as the stock already sports a high P/E ratio relative to its underlying growth assumptions. The drinks giant is not likely to grow revenue and profits beyond the single-digit range. Management's current medium-term guidance calls for mid-single-digit growth in revenue and 5% to 7% growth in operating profit. It's possible the company may be able to grow earnings per share faster than operating income, depending on the extent of management's share repurchase program. The stock also pays a dividend with a yield of 2.6% as of this writing to pad investors' annual return.

Diageo is a classic "defensive" stock. While investors won't hit a home run, people like to have a drink no matter the state of the economy, and many of the drinks people enjoy are made by brands within the Diageo family.