Please ensure Javascript is enabled for purposes of website accessibility
Log In Help Join The Motley Fool
Free Article Join Over 1 Million Premium Members And Get More In-Depth Stock Guidance and Research
By Leo Sun - Sep 17, 2019 at 10:18AM

Is the tech giant losing faith in the world’s top x86 chipmaker? AMD sure hopes so.

Intel's (INTC -2.86%) ongoing chip shortage has frustrated many PC makers and been a boon to its chief rival AMD (AMD -3.66%). The latest company to join the Intel exodus could be Microsoft (MSFT 1.07%), according to German website WinFuture.

WinFuture claims that upon reviewing "a series of corresponding entries in non-public databases of European retailers," it was now "confident" that the upcoming 15" Surface Laptop 3 would run on AMD's CPUs instead of Intel's. This would mark the first time an AMD chip powered a Surface device and could pave the way for future design wins for the chipmaker.

Let's take a look at what this rumored deal might mean for both companies.

What the Surface unit means for Microsoft

Microsoft's devices unit, which mainly sells Surface products, generated $6.1 billion in revenue last year. That marked 19% growth from 2018 and accounted for 5% of its top line.

When Microsoft launched the first Surface devices seven years ago, they were intended to showcase Windows' touchscreen capabilities and spur the development of more innovative 2-in-1 devices across the sluggish PC market.

But over the following years, Microsoft expanded the Surface lineup with the premium Surface Pro, the lower-end Surface Go, the Surface Laptop, the Surface Book (which featured a detachable screen), the Surface Studio all-in-one PC, and the wall-mounted Surface Hub.

That lineup serves as a showcase for Windows and widens Microsoft's moat against Apple and Alphabet's Google in the hardware and OS markets. It also reduces Microsoft's dependence on third-party PC makers.

Last quarter, Microsoft noted that sales of its Surface devices remained strong, particularly among commercial customers, in the U.S., Canada, and Japan. That's why Intel's chip shortage, which creates a bottleneck for the production of Surface devices, is likely frustrating Microsoft.

Microsoft previously stepped away from Intel by partnering with Qualcomm in the development of ARM-powered Windows 10 devices, so it wasn't surprising to see it cozy up to AMD as well. 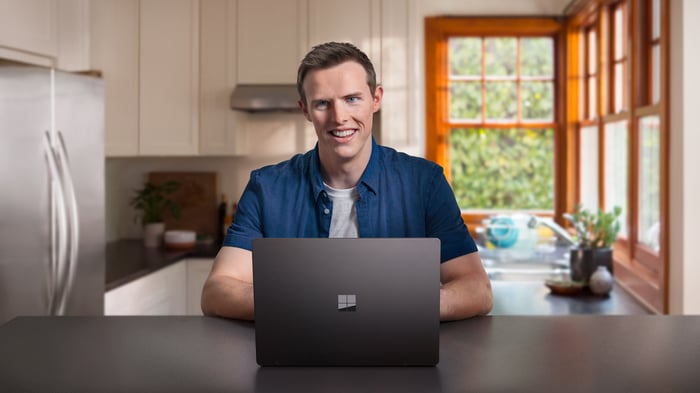 How AMD benefits from Intel's misfortune

AMD gained ground against Intel for two main reasons. First, the chipmaker's new Ryzen CPUs were well received, with most industry benchmarks showing that the Ryzen delivered performance comparable to that of Intel's chips at significantly lower prices.

Second, Intel shot itself in the foot with its CPU shortage, which started at the end of 2018. Intel previously claimed that the shortage would ease in the second quarter of 2019, but subsequently pushed that forecast back to the third quarter. AMD, which launched its second-generation Ryzen CPUs earlier this year, stepped up to fill the void.

Many leading PC makers, including HP and Lenovo, released more AMD-powered PCs as Intel struggled to address its shortages. Therefore it was only a matter of time before Microsoft started installing Ryzen CPUs in its flagship Surface devices.

AMD's computing and graphics unit, which sells its CPUs and GPUs, accounted for 61% of its sales last quarter. Revenue at the unit declined 13% annually last quarter, as lower sales of gaming and professional visualization GPUs offset its higher sales of data center GPUs and x86 CPUs. However, the unit's revenue also rose 13% sequentially on higher sales of both CPUs and GPUs.

Therefore, if AMD continues to win over big OEMs like HP, Lenovo, and Microsoft, its total x86 CPU sales will improve and offset the bumpier performance of its GPU business. It could also convince more data center customers to buy its Eypc CPUs, which compete against Intel's high-end Xeon processors.

Microsoft's use of an AMD CPU in the Surface Book wouldn't be surprising, but tech investors should take the rumor with a grain of salt and await the company's official announcements next month. If it's true, it indicates that AMD is gaining ground against Intel, and other OEMs might hop on the bandwagon and dump the x86 leader.