Old Navy's sales momentum has slowed abruptly over the past year, but management still thinks the brand has ample long-term growth potential.

Earlier this year, Gap (GPS -5.88%) announced that it would spin off its largest brand, Old Navy, as a separate public company. In a nutshell, the rationale was that the high-margin, fast-growing Old Navy brand was being held back by the weaker Gap and Banana Republic brands, particularly from a valuation standpoint.

Last week, Gap provided more details on its plan to split into two companies. The presentation included some aggressive growth targets for Old Navy. If the brand can live up to its growth potential, it could be worth more than the current market cap of the entire conglomerate. However, Old Navy first needs to break out of its recent sales slump.

Old Navy has been Gap's main growth engine recently, adding hundreds of millions of dollars to its top line in each of the past two fiscal years. Comparable store sales grew 3% in fiscal 2018, on top of a strong 6% gain in fiscal 2017.

That said, sales growth was already decelerating by the end of last year. Old Navy posted a flat comp in the fourth quarter of fiscal 2018. And while that performance could be explained in part by the fact that Old Navy faced a tough year-over-year comparison after delivering 9% comp sales growth in the prior-year period, sales trends have continued to deteriorate in fiscal 2019. Comp sales slipped 1% in the first quarter before plunging 5% in the second quarter.

Gap CEO Art Peck attributed the recent downturn to execution mistakes in Old Navy's core women's apparel business. Management determined during the 2018 holiday season that the brand wasn't offering enough choice in this category, hurting foot traffic and sales. However, by that point, most of Old Navy's orders for the first half of fiscal 2019 had already been finalized. Peck expects Old Navy's performance to improve substantially by the fourth quarter, when it will have the full benefit of the merchandise adjustments it is implementing. 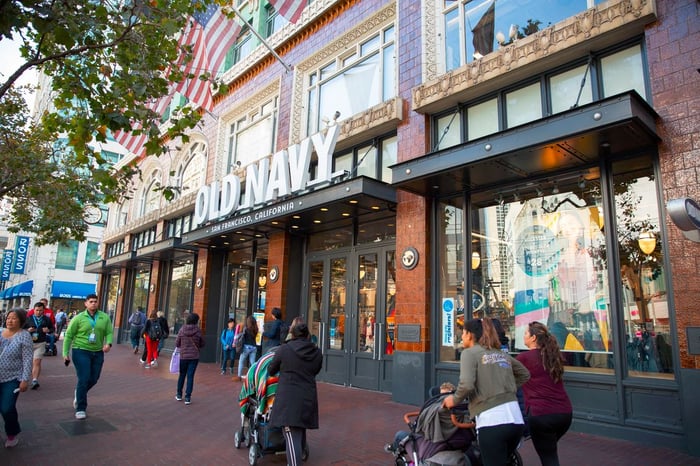 A highly profitable business with room to grow

Prior to its recent setback, Old Navy looked like a powerful, high-margin growth business. Old Navy has produced an adjusted operating margin of at least 15% in each of the last three fiscal years, although it will likely fall short of that mark in fiscal 2019. Store-level operating margins typically exceed 20%.

Meanwhile, Old Navy produced $7.9 billion of revenue last year, up by nearly $1 billion compared to fiscal 2016, adjusting for a recent accounting change. This makes it the No. 2 apparel brand (and a top 10 apparel retailer) in the U.S. It has 42 million known active customers, and its customer base is extremely diverse. Old Navy already gets 20% of its revenue from its highly profitable e-commerce business, and its e-commerce sales penetration is growing quickly.

Old Navy has a clear growth plan designed to push sales past $10 billion. It plans to open about 75 stores a year, growing its current base of approximately 1,140 stores in North America to 2,000 over the long term. Most of the new stores it is contemplating would be located in smaller markets with 200,000 or fewer residents. These stores would typically have lower sales compared to Old Navy's current store fleet, but a similar margin profile.

If they are right, then Old Navy stock could be worth more than Gap's current market cap of $7 billion. Management disclosed at the recent investor day that Old Navy currently generates the vast majority of Gap's profit, while the rest of the company produced an operating margin of 2% last year, down from 4% just two years earlier.

In other words, a successful stand-alone Old Navy would be making almost as much money as all of Gap earns today. But unlike Gap, which is a mix of struggling brands (like Gap and Banana Republic) and growth brands (like Old Navy and Athleta), Old Navy would be a pure growth company with consistently high margins. As a result, whereas Gap stock trades for just nine times earnings, Old Navy could potentially justify an earnings multiple that is twice that level.

Of course, this assumes that Old Navy will quickly return to growth. On a promising note, the brand has bounced back from similar periods of weak sales in the past. That said, the apparel business is extremely fickle. Seemingly established brands can go out of fashion alarmingly quickly. Gap investors must hope that's not the issue at Old Navy.