Please ensure Javascript is enabled for purposes of website accessibility
Log In Help Join The Motley Fool
Free Article Join Over 1 Million Premium Members And Get More In-Depth Stock Guidance and Research
By Dan Caplinger - Sep 17, 2019 at 11:15AM

The stock market largely stayed in a holding pattern on Tuesday morning.

Tuesday morning brought some stability to the financial markets as investors took a pause following Monday's turbulent trading activity. Oil prices gave back a small portion of their huge gains but remained well above where they finished last week. As of 11 a.m. EDT, the Dow Jones Industrial Average (^DJI -0.20%) was up 89 points to 26,797. The S&P 500 (^GSPC -0.30%) rose a more modest 3 points to 2,979, and the Nasdaq Composite (^IXIC 0.00%) was down a single point to 8,153.

As investors wait for more signs about the likely future direction of the U.S. economy, a couple of key companies will release their latest financial reports this afternoon. Many people watch FedEx (FDX -1.14%) as an indicator of the amount of shipping activity going on in the broader global economy, and its earnings could say a lot about whether economic conditions will improve or deteriorate. Meanwhile, Adobe Systems (ADBE -1.72%) commands a valuable niche in the tech industry, and its efforts have been important in driving creativity and innovation across the globe.

Delivery giant FedEx is slated to release its fiscal first-quarter financial results after the close of trading Tuesday afternoon. The company has gotten a lot of attention lately as it tries to navigate shifting trends in the shipping industry while maintaining its leadership position. 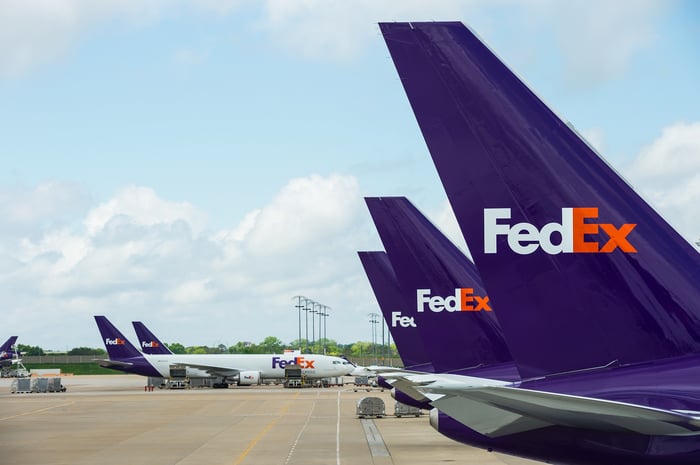 Investors seem nervous about what they're expecting to see from FedEx. The current consensus forecast projects a nearly 9% decline in earnings per share, with revenue likely to remain flat compared to year-earlier results.

Yet the big question that most FedEx followers want answered is how its strategy in dealing with e-commerce giant Amazon.com will fare over the long run. As Amazon has developed its own delivery force, FedEx has gradually distanced itself from the online retail giant. After having chosen not to renew its express shipping contract with Amazon earlier this year, FedEx followed up last month by announcing it won't renew its ground delivery contract, either.

FedEx is dealing with headwinds on multiple fronts, including trade-related disruptions and higher expectations among customers for fast shipping. If its financial report proves to be better than many currently anticipate, then it could signal economic strength not just in the U.S. but across the globe.

Adobe tries to get creative

Adobe Systems is also slated to release its latest quarterly results late this afternoon. The software specialist has worked hard for years to keep its status as a leader in helping to foster creative endeavors with its products, and Adobe's work has led to a steady move higher in the stock price over the long run.

Investors have high hopes for Adobe and its fiscal third-quarter report. They're looking for earnings growth of about 14%, with sales climbing at an even healthier 23% rate compared to year-ago levels.

Adobe's recent results have built up optimism surrounding the company. In the fiscal second quarter, the software titan managed to post 25% year-over-year revenue growth, and multiple factors helped it boost its bottom line as well. An emphasis on digital media created substantial organic growth, and recent acquisitions helped to flesh out some of its software platforms. With a transition to a subscription model being largely complete, Adobe's primary focus is to ensure that its offerings remain the state of the art, essentially forcing creative professionals to stick with the company for the foreseeable future.

Many subscription-based tech companies have seen their shares take a big hit in recent weeks, but Adobe has a longer history of success. It's reasonable for investors to look for more of the same from Adobe on Tuesday afternoon.

Amazon Calls a Truce With FedEx

3 Stocks for the Booming E-Commerce Market

3 Stocks to Watch Next Week: Adobe Systems, FedEx, and CarMax