Stocks rallied late in Tuesday's session to finish with gains as oil prices fell after yesterday's spike and investors looked forward to a possible interest rate cut by the Federal Reserve tomorrow. The Dow Jones Industrial Average (^DJI 0.08%) and the S&P 500 (^GSPC -0.07%) rose modestly. Real estate and utilities were the strongest sectors, while energy stocks slumped.

As for individual stocks, Corning (GLW 0.92%) lowered sales forecasts as businesses rein in spending, and Shopify (SHOP -0.47%) announced that it's selling more shares to raise cash for expansion investments. 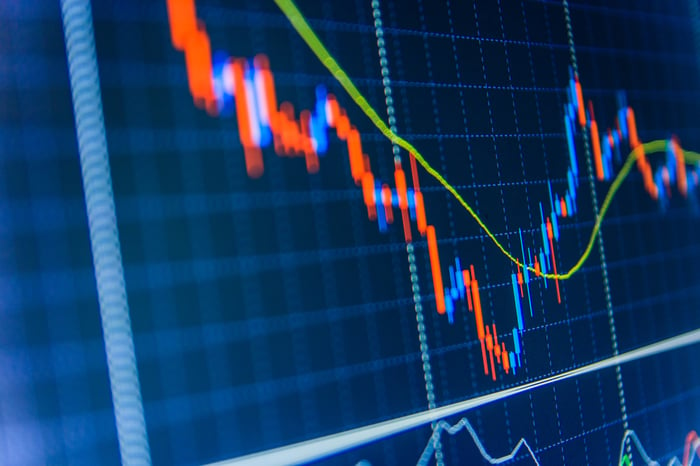 Corning cut its sales forecast for the third quarter due to slowing demand in two of its five business segments, and despite news of a $250 million pre-payment from Apple, shares fell 6.1%.

In Corning's optical communications segment, its largest by sales, the company said that several major carriers are reducing capital spending on cable deployments and fiber-to-the home projects, and it now expects a third-quarter sales decline in the low teens and full-year sales to fall 3% to 5%. At the beginning of the year, Corning had expected sales to grow by a low-teens percentage.

Corning said that display technologies, the company's largest source of profit, is being affected by conservative buying by TV makers, apparently due to economic uncertainties. The company had expected a weaker quarter, forecasting in the last conference call a low-single-digit decline in glass volumes from Q2, but now thinks the drop will be in high single digits. Corning believes the softness is temporary and continues to see glass prices holding steady.

Shares of Shopify fell 2.7% to $328.82 after the online sales platform specialist announced a secondary offering of its stock to raise money to fund future growth strategies. Shopify plans to sell 1,900,000 shares at $317.50 per share, raising $603 million in cash, plus offer the underwriters an option for an additional 285,000 shares.

The move comes after last week's announcement that Shopify is acquiring 6 River Systems, a maker of robotic warehouse systems, for $450 million. Shopify plans to spend $1 billion over five years to expand its logistics capabilities, and said in its last conference call that it will accelerate spending on the Shopify Fulfillment Network. The company wants to offer businesses using its platform the ability to provide faster and cheaper shipping services from their own web sites than they could any other way.

The offering represents about a 2% dilution of the outstanding shares of this red-hot growth stock. Shopify also announced new features on its platform to help businesses sell into the fast-growing U.S. market for hemp and cannabidiol (CBD) products.