NVIDIA has a life beyond bitcoin and games right now, not in the distant future.

Buying NVIDIA (NVDA 1.42%) now is a bet that the chipmaker will stop its yo-yo price swings and move up from its current price level rather than plunge yet again. Even at the current price, NVIDIA is looking oversold as investors punish it for going so heavily into cryptocurrency mining, with the stock losing around a third of its value since its record high last year.

But the rollercoaster cryptocurrency ride is hardly over as Facebook (META 1.36%) and other producers open up a new phase with stablecoins -- cryptocurrencies that try to offer price stability and are backed by a reserve asset. Meanwhile, other graphics processing unit (GPU) uses in artificial intelligence (AI), autonomous driving, big data, and gaming still offer massive potential. 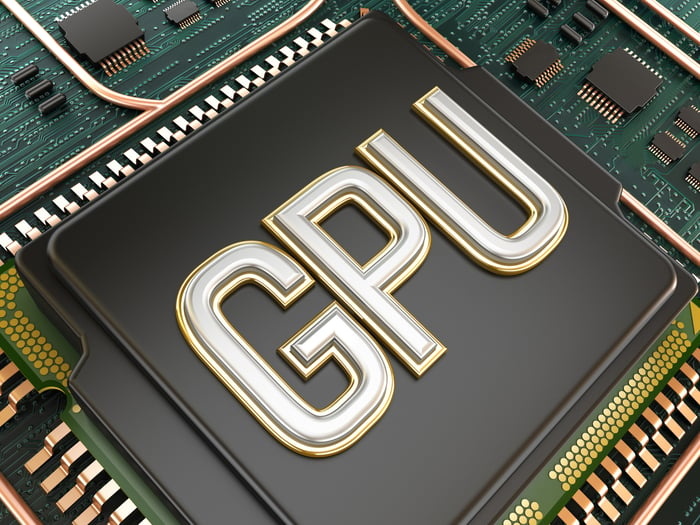 Feeding at the trough

Conventional wisdom has it that NVIDIA is in a trough. The cryptocurrency bubble, which buoyed the stock price to last year's high, has burst and will never return. All those other promising lines are in the future, so some might think NVIDIA stock isn't going anywhere right now.

There are two big problems with this view. First, the stock is going somewhere -- it's soared nearly 40% since the beginning of June. Second, it doesn't account for widespread optimism about NVIDIA, with 21 analysts out of 38 analysts having either a strong buy or buy rating on the stock.

The beauty of the stock market is that it anticipates events, and the way to make money is to buy low and sell high. That is the best way to use a trough, as long as you believe that recovery is not too far away.

GPU is not ready for the ICU

NVIDIA is credited with inventing the GPU, a microprocessor with the power of visualization. Its first, and still one of its biggest uses, is in gaming. Most recently, NVIDIA's ray tracing (a rendering technique that can produce highly realistic lighting effects) brought a real-time three-dimensional aspect to games that has transformed the industry.

Gaming remains a major line for NVIDIA, accounting for about half its revenue. But the advanced computing power of GPUs has led to numerous other applications, so that these microprocessors have replaced the traditional central processing units (CPUs) in many places, from financial modeling to oil and gas exploration.

This computing power was why GPUs became so involved in cryptocurrency mining, a process that grows more intensive as more coins are produced. It was the boom and bust in crypto mining that propelled NVIDIA stock higher before its collapse last year. But many other sectors need the computing power of GPUs.

Those who believe a recession is imminent are getting out of retail stocks and plowing into utilities, adopting a defensive position. Tech stocks, however, can have a momentum of their own. If anything has proven true in recent years, it's that growth in artificial intelligence, autonomous driving, and big data has outpaced expectations.

On top of all the current uses, Jensen Huang, co-founder and chief executive of NVIDIA, sees the next phase of AI as vertical industry enterprise. Companies will use AI not only to improve internal processes but to create new products and services linking together various components.

It's the Internet of Things on a grand scale: linked medical instruments to monitor your health, forecasting or fraud detection in financial services, or even delivery bots for pizza. NVIDIA is working with some 4,500 start-ups on AI.

Meanwhile, big data is getting bigger. High-powered NVIDIA chips are going into data centers and supercomputers. NVIDIA is also getting into networking, agreeing in March to buy Mellanox, a US-Israeli networking company, for $6.9 billion. (The challenge of getting Chinese regulators to approve the acquisition in the current environment is one of the things depressing NVIDIA stock.)

Autonomous driving for passenger vehicles may be held back by consumer resistance, but the trucking industry is pushing for the solution to its problems. NVIDIA sees the $100 trillion transport industry as having tremendous potential.

And what about those cryptocurrencies? Yes, the mining activities for bitcoin, Ethereum, and other pure cryptocurrencies have slowed down. But stablecoins are coming to the fore. Everyone from JPMorgan Chase to Facebook to China's central bank is launching a cryptocurrency.

Stablecoins are "minted" rather than "mined" like bitcoin. That is, they are issued in exchange for assets denominated in fiat currencies and "burned," or destroyed, when exchanged back. This process is different than cryptocurrency mining and doesn't require GPUs.

But stablecoins could spur adoption of cryptocurrencies, and the use of bitcoin for transactions could stabilize its value. At the same time, blockchain, the technology underlying bitcoin, is being adapted to numerous other uses, all requiring massive computing power. One of the most recent AI start-ups to affiliate with NVIDIA is Turin-based Hybridverse Blockchain, which will focus its collaboration on its stablecoin.

The cryptocurrency opportunity isn't evaporating. AI is growing exponentially. Big data is right behind. Gaming is well on the road to recovery. NVIDIA's future is now. Don't miss the boat.