Please ensure Javascript is enabled for purposes of website accessibility
Log In Help Join The Motley Fool
Free Article Join Over 1 Million Premium Members And Get More In-Depth Stock Guidance and Research
By Rich Duprey – Sep 18, 2019 at 6:31AM

The second attempt at spinning off the international division could still allow the company to come out ahead in the end.

Anheuser-Busch InBev (BUD 1.02%) is once again preparing an initial public offering for its Asia Pacific business unit but this time for reportedly almost half the deal size. The last time the megabrewer attempted to spin off the business, it overestimated investors' willingness to pay for the Budweiser brand in Asia. It had hoped to sell 1.6 billion shares for between 40 Hong Kong dollars and 47 Hong Kong dollars (between $5 and $6) each, a transaction that would have valued Budweiser Brewing Company APAC at nearly $64 billion and netted Anheuser-Busch about $9.8 billion. It also would have been the world's biggest IPO this year, surpassing the $8.1 billion Uber raised in May.

The market, however, balked at the premium being sought, and the brewer withdrew the listing. Now, Anheuser-Busch is back for a second bite at the apple, hoping to raise an estimated $5 billion this time around -- and there's a good chance it'll get it. 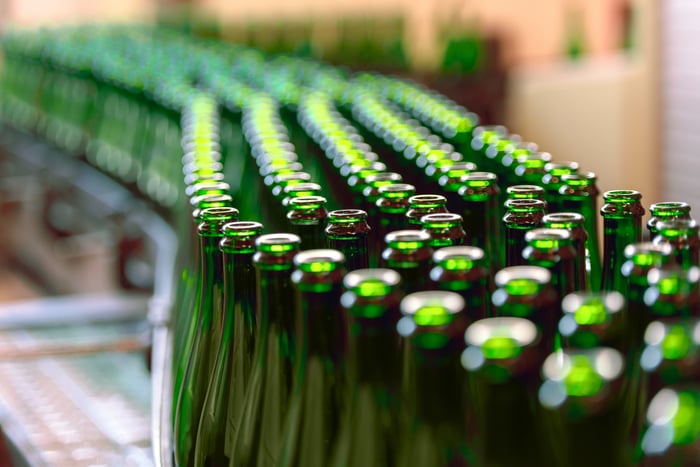 A different business going up

The new IPO may be more attractive to investors for several reasons, but namely because between the two attempts, Anheuser-Busch sold the unit's Australian subsidiary, Carlton & United Breweries, to Japan's Asahi Group for $11.3 billion.

While that reduces the size of the overall business being spun off, Australia is a bigger, more mature, and slower-growing market. Without it, Budweiser Brewing becomes more of a China play, which analysts believe can become an important growth market as the country's middle class expands. Other fast-growing Asian markets include India and Vietnam.

Budweiser Brewing Company APAC reported revenue of $6.7 billion in 2018, up 7.4% from the prior-year after the Australian unit had been stripped out; with it included, revenue was $8.5 billion, but organic growth was only 6.1%.

Anheuser-Busch itself has performed well in China, with sales rising 8.3% last year and up another 7.1% in the second quarter. They're up 7.4% over the first six months of 2019, with super-premium beers Corona and Hoegaarden enjoying double-digit growth, while the flagship Budweiser brand was up by high single-digit percentages. EBITDA also grew by 24.4% for the China business with margin expansion of 583 basis points as the brewer continued with the premiumization trend of its portfolio.

A win-win for everyone

As news of a second possible IPO attempt spread, Anheuser-Busch acknowledged it had resumed its efforts to list a minority stake in the Asian business but cautioned, "No assurance can be given that this transaction will be completed and the decision to proceed will depend on a number of factors and prevailing market conditions."

No doubt the newest prospectus will include risk warnings about lower potential valuations. In the last listing, Anheuser-Busch didn't disclose that key buyers might not be interested in the company's target valuation for the business -- Hong Kong exchange rules require such disclosure, or the company has reduced flexibility accepting offers below its listing price. When the valuation was deemed too high, Anheuser-Busch couldn't entertain any lower potential offers.

That Anheuser-Busch is back trying to unload the business is not surprising. With the $100 billion debt overhang from its acquisition of SABMiller, it's desperately trying to reduce the size of its obligations. But actually, it may have worked out better for the brewer in the end. With $11 billion realized from the sale of the Australian business, and potentially $5 billion raised from this IPO, Anheuser-Busch will see more proceeds from having done it piecemeal.

Analysts, though, were still surprised by the speed with which Anheuser-Busch returned to the IPO process, and they believe it may not be the only play it's trying to make. A Sanford C. Bernstein analyst in Hong Kong suggests high brewer valuations in China may be motivating the megabrewer to capitalize on them, or "[...] they have an M&A deal in the pipeline and need a listing to proceed."

In either case, Anheuser-Busch InBev is back to spin off its Asia Pacific unit, and if successful this time around, it should be investors who profit as well.