The social networking giant has smart augmented reality glasses in the works.

Facebook (FB 4.24%) has enjoyed massive success in copying Snap's (SNAP 4.59%) most popular features, particularly the Stories format that is now ubiquitous across just about all social media platforms. Thanks to Facebook's much larger scale -- over 2.7 billion people use one of its core services every month -- deploying trendy features makes a broad impact on its global community of users. 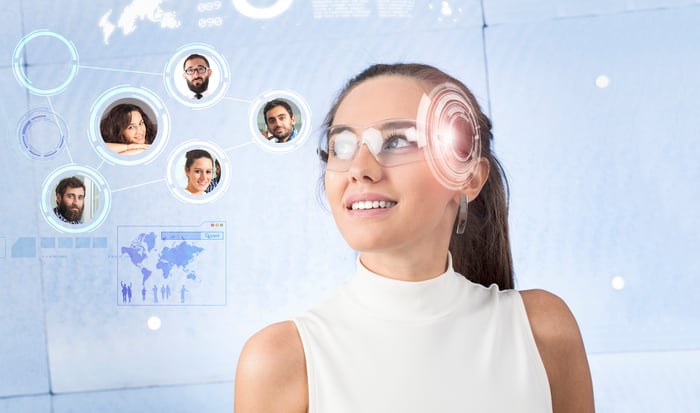 Two types of smart glasses in the pipeline

The Information and CNBC are both reporting that Facebook is working on potentially two pairs of smart glasses, partnering with eyeglass juggernaut Luxottica and its Ray-Ban brand. A pair of smart glasses code-named Stella are designed to replicate Spectacles' functionality, according to The Information, allowing users to capture photos and videos to share on the tech platform. Facebook is aiming to release the smart glasses "within the next couple of years," according to the report.

Looking further out, Facebook hopes that a set of augmented reality (AR) glasses dubbed Orion can displace smartphones altogether, CNBC reports. The AR glasses would be able to make phone calls and display actionable information in real time. Users could even potentially live-stream their point of view on Facebook platforms. The tentative timeline for that product's launch is somewhere between 2023 and 2025.

Snap unveiled Spectacles 3 last month, with the Snapchat parent hoping that a more fashionable design can justify the hefty $380 price tag. The smart glasses have not contributed meaningfully to user engagement on Snapchat.

To be fair, rumors that Facebook has been developing AR glasses have been around for years, with CEO Mark Zuckerberg saying as early as 2015 that he believed AR glasses are the future. That prediction came shortly after the company closed its $2 billion acquisition of Oculus VR. With virtual reality (VR) intricately linked to AR, pivoting to AR is inevitable.

His Zuckness again laid out his vision at F8 2016, and Facebook's head of AR, Ficus Kirkpatrick, directly confirmed in October 2018 that the company was working on such a gadget. "Well, of course we're working on it," Kirkpatrick responded when asked point-blank whether the social giant was developing an AR headset.

Fresh off the heels of its first hardware launch, Facebook's Fiscus Kirkpatrick says the company is also working on an AR headset https://t.co/AS8IMIO56b #TCARVR pic.twitter.com/eWW6JX22yc

Snap was able to beat Facebook (and everyone else) to market, launching the first Spectacles back in late 2016 (not that the company is enjoying a real first-mover advantage since Spectacles' use case is extremely limited). The more pertinent competitive question will be if Facebook can beat all of the other tech behemoths that are eyeing AR.