The third time likely won't be the charm for Snap (NYSE:SNAP) and its beleaguered eyewear efforts. The Snapchat parent today announced Spectacles 3, the third-generation wearable cameras that are intended to create content for the ephemeral photo- and video-sharing platform. Despite previous versions consistently flopping, Snap can't seem to stop making Spectacles. 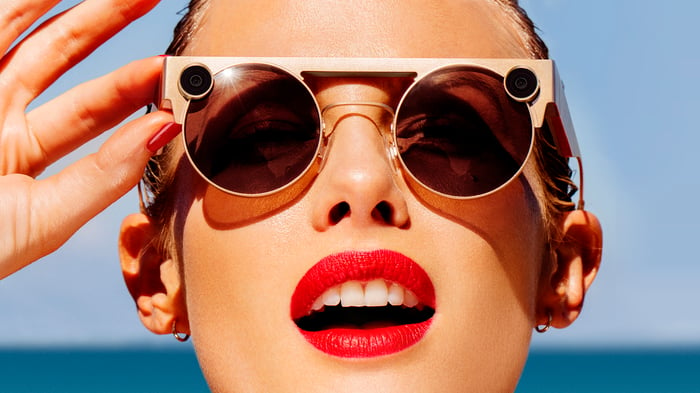 A new look and a massive price increase

The latest iteration of Spectacles features redesigned steel frames and circular lenses. There are two HD cameras that are incorporate depth perception in order to better capture photos and videos in 3D, which will be quite useful for applying augmented reality (AR) filters. Users will be able to add various 3D effects on Snapchat.

The sunglasses will come in two different colors, Carbon (black) and Mineral (beige), and will ship in November. Incredibly, Snap is jacking up the price to $380, more than twice as much as the second-generation Spectacles launched last year that cost $150. There was a minor midcycle refresh in late 2018 that added a couple new styles at the $200 price point.

Snap is hoping that the new more fashionable design aesthetic can help justify that premium over previous versions, according to The Verge.

Snap learned its lesson on overordering

The Information reporter Alex Heath says the company is only planning on producing "low tens of thousands" of Spectacles 3.

Shipping at end of October! Am told Snap is making low tens of thousands of these. https://t.co/F34RV7hdU9

In contrast, Snap reportedly had "hundreds of thousands" of unsold first-generation Spectacles collecting dust in warehouses back in 2017, which ultimately culminated in the company eating a $40 million charge related to inventory writedowns and purchase commitment cancellation charges.

Snap is proceeding more cautiously now, and artificial scarcity had actually contributed to the hype bubble when the original version initially launched in 2016.

Spectacles have never been material in any way

It's still unclear why Snap CEO Evan Spiegel remains so intent on developing hardware. That fixation and the related expenses reportedly contributed to former CFO Drew Vollero's departure last year. The product sells at a loss per unit and generates virtually no engagement on the core Snapchat platform. That also means Spectacles don't really help support the advertising business, either.

A higher price point will inherently reduce demand for Spectacles 3 but may make it easier to generate positive gross profits on each pair sold. Ultimately, Spectacles 3 will remain a troublesome distraction. "For the periods presented, revenue from the sales of Spectacles was not material," the company wrote in its most recent 10-Q.